It rained heavily here yesterday, cascading down from doom laden cloud most of the afternoon. The roses were hammered from the bushes and everything ended up looking beaten and bedraggled. A truce was declared around dusk allowing me to venture out into the garden to see what creatures were taking advantage of the opportunities afforded by the thorough drenching.


With the mournful piping of a robin for accompaniment, the only bird left singing in the near dark, I trawled around the shrubs and flower beds with a head torch to see what I could find. As expected, snails were crawling around everywhere and not just the common garden snails. There were good numbers of both white-lipped and brown-lipped snails sliding around on tree trunks and across the lawn. Some of these were minuscule, with tiny shells almost translucent. The larger ones varied in colour, some dark orange others brighter yellow. All relishing the moisture coated world. Slugs were not so numerous although a few clung to plant stems. I found a very aptly named greenhouse slug, apparently an introduced and spreading species, sliding down the greenhouse door and a large red slug munching the stems of golden rod. Apologies for the poor images, but I hope it gives a flavour.

A silver Y moth flitted through the torch beam but was soon lost to view as were lots of other micro moths all seeking nectar or pollen or a mate. It was too early for any serious macro moths to emerge and those will be subject of a later blog I hope when we are assured of a warm, dry evening.


Unusually the lawn and paths were quite devoid of frogs which would normally be hopping around   relishing the chance to feast on worms forced from their burrows. Quite often in the past, a sudden downpour after days of dry weather would see an army of these amphibians spreading out from the pond in waves.  That phenomenon hasn’t occurred for a while now although there are often a dozen or so cooling off in the pond margins. Something has happened to quell their numbers. Something has also happened I noticed to kill off nearly every tadpole that hatched from the large mass of spawn deposited in spring. I worry that the smaller pond, the one they chose for breeding because presumably it warms a bit quicker, became polluted through an accumulation of gases released from too many fallen leaves. Whatever the reason, I could only find a single wriggling specimen a couple of weeks back to show the Beaver Scout group that visits our humble patch every other year to indulge in a spot of low key pond dipping. What I also found, aside from a couple of smooth newts and a good selection of plankton, was a small  frog whose left hind leg was seriously deformed with most of the leg itself missing leaving just three toes protruding from its body. It seemed in good enough general shape (pardon the pun), but I did wonder whether it could only swim in circles! Much laughter when this was discussed with the youngsters one of whom stood there with his nose pressed against the small tank containing the three limbed creature. ‘I could watch these for hours’ he said.

I digress. And I was getting rather damp from having to wade through drooping foliage laden with rainwater. But I did find a couple of other small creatures of the night. One of these took the form of a predatory spider whose identify I know not, lying in wait for slow moving, soft bellied victims, the other a lesser stag beetle. And that ladies and gents was about it. Back to the dry sanctuary of the house for a cup of tea and a few frustrating games of Ruzzle with my friend, herself a word game predator, who is just too damn good for this particular slow moving, soft bellied victim. Next time perhaps. 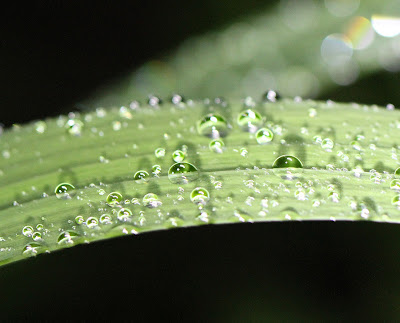 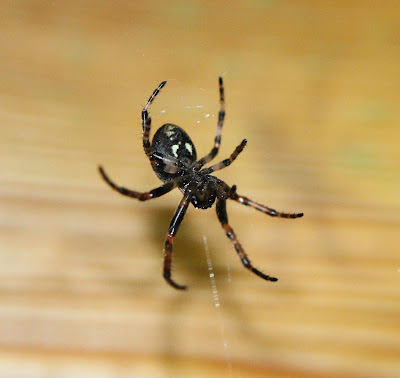