It was a windy day at RSPB Strumpshaw Fen yesterday, far too windy for swallowtails, dragonflies and the like. In fact it seemed too windy and uncomfortable for just about anything with wings; the skies of the Fen being uncharacteristically empty. The occasional marsh harrier battling the stiff westerly breeze, the odd tern and gull and in the latter part of the morning numbers of swifts hawking a hatch of some small emergent insects. But that was all. Nothing else other than grey clouds sailing briskly by and waves of wind tossed reeds rippling as they ebbed and flowed at the mercy of the air currents. Predictably human visitors were thin on the ground unlike last week when I am assured the Visitor Centre was assaulted by literal swarms of people hoping to catch a glimpse of our special butterfly. Today, instead of a torrent a trickle,  but all are welcome and all enthusiastic and hopeful.

After my shift I trickled through the water meadows myself, hoping to catch sight of another iconic insect that is pretty much only found in this county. Norfolk hawker dragonflies thrive where water soldier plants do well. The plants are very sensitive to eutrophication, so need undisturbed clean, clear water to grow. Happily reserves such as Strumpshaw provide an ideal network of ditches and drainage dykes where this strange aquatic spike ball can live. Contrary to my expectations there were a small number of dragonflies on the wing, zipping about very low over the water to minimise exposure to the strong breezes still whipping mercilessly across the open fields sending the carpet of ragged robin, cotton grass and orchids tossing as on a raging sea.

Before long the bright green eyes of a Norfolk hawker took my attention and I watched this insect patrol it’s selected territory investigating every other dragonfly that approached. In this way it saw off several broad bodied chasers and a couple of hairy dragonflies before alighting at last upon a reed stem. Wrong lens, wrong angle but a couple of record shots in the bag. It’s always fascinating watching these superbly evolved aerial predators, they miss nothing. If you look closely you will see that their heads with those huge compound eyes, are always twisting this way and that scrutinising the skies for rivals or potential mates. 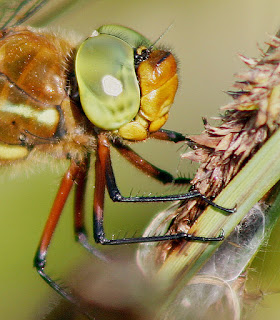 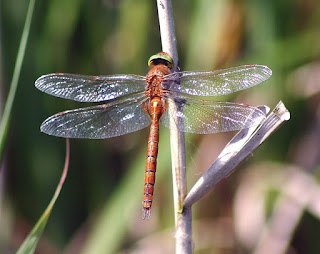 If you look closer still along the untidy margins of the dykes you may be lucky to see a female laying her eggs in the stems of a water soldier plant. The Latin name for these Norfolk specialties is Aeshna isosceles derived from the yellow triangle present on the abdomen. Whatever you wish to call them, they are, as is with much of Broadland wildlife, quite special. 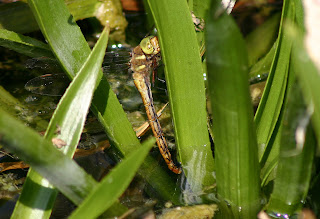