Ambling along London Street in Norwich on a quiet Monday morning I stopped in my tracks as a strange, but simultaneously familiar, birdsong hit my eardrums. It can’t be I thought, as I was mentally transported to streets and parks of Mediterranean cities, but there was no denying it; I was listening to the song of a black redstart. I gazed up and eventually located the bird pouring forth his piercing jumble of notes from atop a TV aerial. Now, there have been reports this spring of black redstarts in the city, but they were some distance away from this spot so I was rather pleased to have encountered what is a very scarce bird hereabouts. A young lady sipping coffee al fresco looked at me questioningly. ‘Black redstart’ I said ‘Oh I wondered what it was, thank you’ she replied. You see people do notice out of the ordinary things and are happy when told what it is. Always good to put a name to a face, or voice in this case.


Urban birds are the cause of mixed emotions, some hate the early morning mewing of gulls, others detest pigeons, most love feeding the ducks and delight in robins and goldfinches. Whatever your personal feelings, there’s no denying they add colour, sound and interest to our towns and cities. And there can be a surprising number of different species utilising our man made nesting and feeding stations. In the fine city I call home I’ve seen sand martins setting up home in drainage pipes along the river bank, often encountered grey wagtails tripping along the selfsame river margins snapping up flies. I’ve had the pleasure to watch a merlin weave over and around the rooftops in search of sparrows, dabchicks surreptitiously hiding in the tangle of overgrowth, kingfishers arrowing blue and orange past startled office workers and cormorants that sit in prehistoric silhouette alongside busy thoroughfares. Add to that starling murmurations, pied wagtail mass roosting, woodcock tumbling exhausted from autumn skies and waxwings stripping berries from shrub fringed supermarket carparks and a rich tapestry develops. But not until today a black redstart, it made me happy.


Another urban exploiter of ample food and a secure nest site occupied my afternoon when I undertook my shift at the peregrine watch point. My, how those chicks have grown. No downy clad infants now, these birds are on the cusp of fledging with much of the afternoon spent perching on the edge of the nest platform vigorously flapping their wings. It won’t be long now before they take that leap of faith and launch themselves into the air with 250 feet of nothing very much between them and the ground. 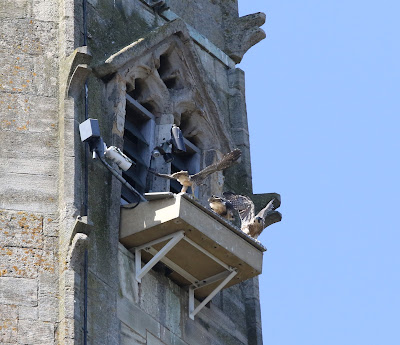 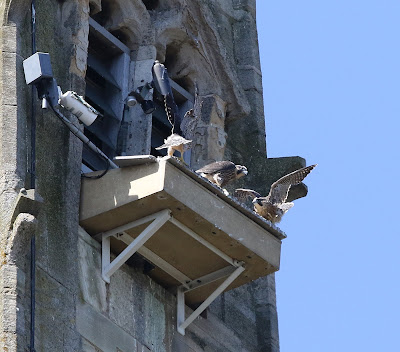 The parents were deliberately keeping their distance from the nest, and will soon be actively encouraging the youngsters to make that daunting first flight. They are becoming very intolerant of intruding gulls and will attack any lesser black back that innocently strays too close. Once today the female rocketed skywards to see off a harmless passing buzzard; they take no risks with threats real or imagined. The next few weeks are critical for the young falcons and will see them learning all about life in the wild, it should be a very interesting time.