As Viewed Through a Car Window


A rare, but gratefully received, day of sunshine and relative mildness tugged me into the bright green expanses of East Norfolk. The break in my lethargy did not extend so far as to actually indulge in exercise - no walking involved today – but instead I thought I would slowly drive along the many narrow lanes spider-webbing the northern slopes of the Yare Valley to see what I could find.


First stop the marshland near Acle where I hoped, vainly as it turned out, to catch sight of a short-eared owl. Whilst no such yellow-eyed, sharp-taloned hunter gave itself up, I was quite impressed with the large numbers of swans bedecking the fields either side of the A47. Most were mute swans feasting on the tops of some root crop, but in the distance I spotted a pair of Bewick’s swans and beyond them it looked like several of the herd had rather straight necks; too far away for any meaningful identification. 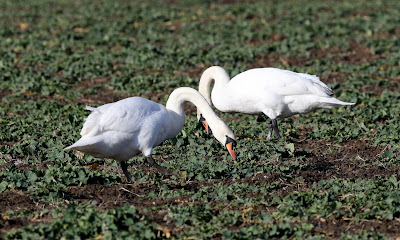 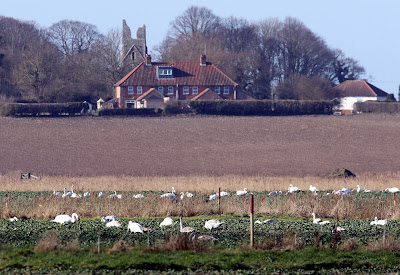 Ranks of rooks and jackdaws, splattered like notes on a musical stave, probed the soft earth of a field containing several shaggy horses. Above those of their number intent on ridding the marshland of invertebrates, courting pairs flew. I watched some of these lovers twisting and cavorting in the fresh February air, flinging themselves through the void with abandon. The dancers would career towards one another, banking to avoid a collision at the last possible moment, before plummeting earthwards, regaining full control a few metres above terra firma to land sedately amongst their brethren.  I don’t think I’ve ever consciously watched this behaviour before and admit to being quite taken with their aerobatic prowess. Corvids are a common inhabitant of the Yare Valley with many thousands littering the fields throughout the year. This culminates in the amazing spectacle of huge numbers flocking to roost at Buckenham, where in my youth, I used to like listening to their caws and yelps as they commenced nesting during the lengthening days of March. The memory of idly strolling across the damp marshes in the dusk of a late March day, the sun slowly sinking into a wash of pinks and greys, the distant sounds of the rooks and courting lapwings echoing across the expanse, will always be with me. Perhaps it was some kind of heightened sense associated with youth, but I remember almost being able to taste the changing season. When those kinds of sensations fill your mind and body it leaves a mark; in this case a deep affection for these lowland areas that still evoke feelings of space and the wild.


Near Reedham I simply had to stop the car to gaze at the wonderful sight of hosts of gulls following a plough. Rank upon rank of white and grey birds milling around the slowly moving tractor as so much paper tossed in the breeze. The black-headed and common gulls were joined by more corvids, starlings and woodpigeons seeking to take advantage of juicy morsels exposed by the newly turned earth. A lone Chinese water deer patrolled the edges, presumably looking for succulent roots on which to feed. So much life here. 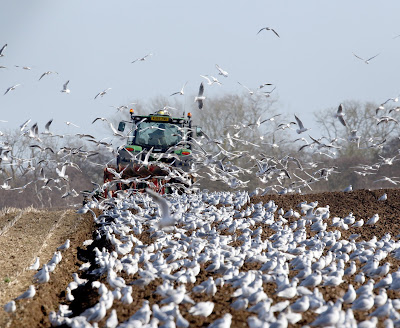 At Buckenham, wigeon brightened the ditch edges, all pristine, paired up and ready for their flight north. Their breezy whistling always lifts the spirits. Distant flocks of pink-footed and white-fronted geese were spooked by a marsh warden, spiralling around, yelping and braying as they do, until they judged the human far enough away to represent no threat; then returning to earth with large feet and broad tails splayed out to brake the decent.  And watching all of this from its perch in a tree on the edge of a copse was a peregrine: the slate grey hunter that spends the winter culling the abundant wildfowl. This bird sat sedately preening for the duration of my stay, no doubt it had feasted well during the morning and was in no hurry to seek further prey. It wouldn’t have to look far; hundreds of wigeon, teal, shoveler, pipits and peewits went about their business within easy striking distance: no more than a few beats of the peregrine’s powerful wings. 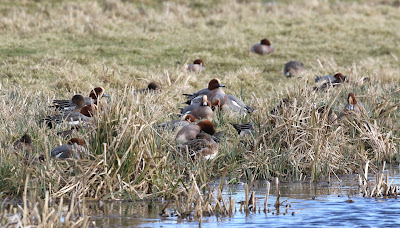 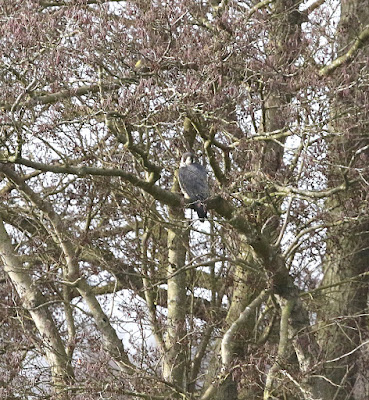 Welcome signs today that spring, if not exactly sprung, is coiled and ready to pounce. It has been quite difficult getting enthused about local wildlife after the bounty of South America, but with the joyful melody of skylarks greeting the mild afternoon I turned for home, quite content with what a late winter day here in my humble homeland had provided. And all without getting out of the car.