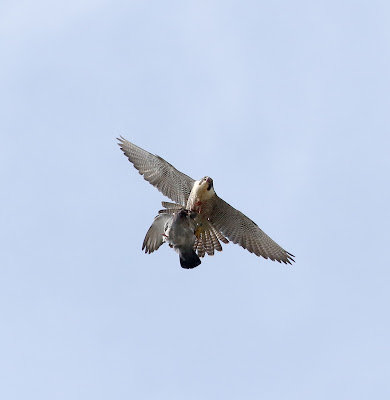 There is a pair of peregrines nesting on Norwich cathedral; they occupy a platform positioned by the Hawk & Owl Trust half way up the eastward facing section of the spire. This platform has been used as a nest site for the last seven years with a good deal of fledging success during that time. There is a live web feed from a camera positioned just above the nest which generates a huge amount of interest from the general public who can watch the antics of the birds 24 hours a day. And it really is something of a soap opera. Two years ago a big, aggressive female arrived on the scene, ousted the resident female (who was never seen or heard of again) and took over the territory. The resident male, as men do, took an instant fancy to this young bird and started flirting with her quite unashamedly. There were great fears that in the throes of new found love he would neglect his young offspring, but to his great credit he managed to provide for them and raised them single handedly. The new female, referred to ever since as GA because of the code on her leg ring attached to her in Bath, had nothing whatsoever to do with the chicks because they were not hers. All was good until the chicks fledged and left the nest whereupon GA attacked them one by one and sadly caused their demise. Last year the new pair had a full clutch of four eggs, but one or two mishaps resulted in only a single chick fledging. That’s ok; peregrines are long lived birds and top predators, so fledging one or two chicks a year is success enough. This year with greater experience, 3 of the 4 eggs hatched and the resulting chicks are currently robust, healthy and on course to fledge sometime towards the middle of this month.


I volunteer my services at the H&O watch point in the cathedral close on a Monday afternoon and this allows a great insight into the lives of these majestic Falcons. The setup is very slick nowadays with several telescopes trained on the action for the public to use and see nature red in tooth and claw. (There really is nothing like seeing in close up the entrails of a disemboweled pigeon sliding down the cathedral spire to make you realise nature can, and often is, quite brutal). Volunteers like me point things out and tell people about the birds and their habits. It really is heartening how folk of all ages and from all walks of life engage with these raptors and are fascinated by their lives. 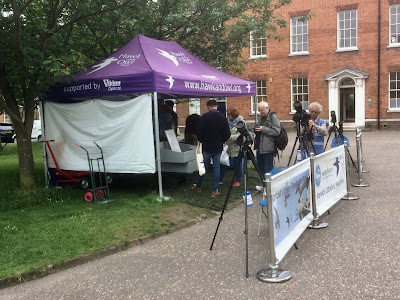 Anyway today, although quiet in terms of numbers, did illustrate the effect seeing such dynamic wild creatures in the flesh can have. I heard more than one ‘wow!’, ‘amazing!’, and various other utterances requiring exclamation marks. All these an involuntary reaction to being able to see a beautiful adult peregrine falcon simply sitting on one of the cathedral crockets. With the chicks now well grown and fed, the adult birds had relatively little to do. There was one food pass however, resulting in what was, for me, the sweetest moment of the day. GA having taken her fill allowed the male to take what was left of the pigeon carcass for his own. He disappeared behind the spire from where a paper chase of downy feathers could be seen scattering in the quite chilly northerly breeze. Within a couple of minutes a group of swifts appeared circling around the spire. Initially I wondered if these were simply mobbing the falcons but then realised they were catching the feathers in midair to use for their nests. That pigeon was well and truly recycled.


Sometimes one or other of the birds can disappear for some time. On my last shift GA was absent for three hours and upon her return her mate flew off and hadn’t reappeared by the time the shift was over. On the off chance that something good may happen given the long period without prey being brought to the nest site, I chanced a few minutes wait in the cathedral cloisters from where you are much closer to the action. My hunch paid off within a few minutes when the male brought a complete feral pigeon carcass to the female. She accepted the prize and proceeded to circle the spire calling loudly, dead pigeon dangling from her talons. Its moments like these that make long uneventful waits and the whole volunteering effort so worthwhile. 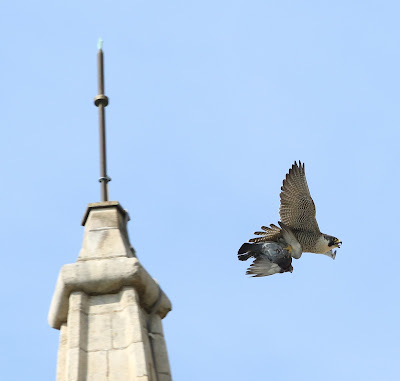 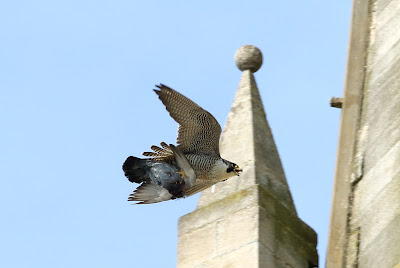 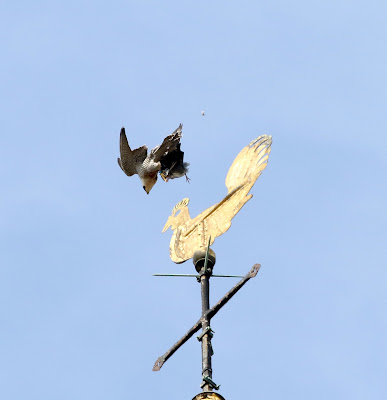