30 days Wild - The Perils of Growing Up

At this time of year when so many young birds are hopping around our gardens it is as well to ponder on the wide range of obstacles that lie between them and their evolution to adulthood. A couple of instances recently have brought home the many perils that face newly fledged or those immediately independent young of birds once they leave the safety of their nest. The first was a sad and sorry spectacle of what looked like a young starling or blackbird dangling very much dead and bedraggled from the branches of a tree growing alongside the River Tas. This poor inexperienced youngster was hopelessly entangled in fishing line that had been snagged on the overhanging branch. Perhaps a wriggling maggot attracted its attention. Whatever it must have endured a slow and painful death and all because some stupid fisherman managed to misjudge his cast. An all too familiar tale along our waterways I fear. 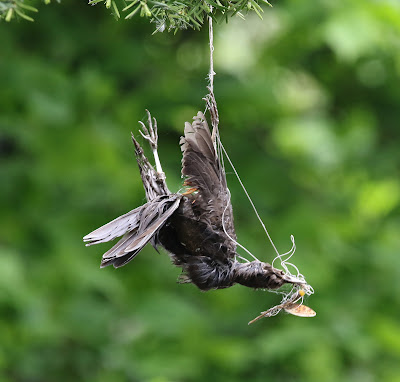 The second incident was quite bizarre. Whilst watching newly fledged blue tits exit their nest box at Strumpshaw Fen a couple of days ago, one flew into a tangle of cobwebs that had collected in the adjacent reed screen. These webs were so remarkably strong that they effectively glued the poor youngster’s primary feathers together rendering it incapable of further flight. It tried to flutter into a nearby tree to join its siblings but only succeeded in crashing to the ground. Showing remarkably agility for someone who can’t get out of bed in the morning without a series of grimacing oohs and ahs, I scrabbled under the benches to retrieve the tiny, almost weightless bird. I then carefully unpicked the sticky web from the fledgling’s wing whereupon it flew away uttering it’s nasal contact note none the worse for its adventure. Away from human intervention it would surely have fallen prey to the first predator that stumbled upon it.

There are other instances over the years that have served to illustrate just how daunting the first few days of life can be for a young bird.


The peregrines at Norwich Cathedral are well loved with every action monitored by a webcam; that is until they fledge. At that stage they become immediately vulnerable to all the trappings of the big wide world as can be found in a modern city. Whilst learning to hunt, it is not unknown for these L plate falcons to fly into posts or other obstacles breaking their necks in the process. They quite often find themselves on the ground and have to be rescued, or are found dead in gardens of the Close. On one recent occasion a brood was killed by an interloping female.

Magpies, jays and herons will pick off undefended and vulnerable chicks. When I was resident at Norfolk Wildlife Trust’s Ranworth Broad reserve we nicknamed the resident heron Hannibal after his habit of systematically dispatching every mallard chick that ventured within stabbing distance. I vividly remember the sight of him plunge diving into the moat around the Visitor Centre to emerge with a wriggling baby mallard in his formidable beak. Families watched in horror, Hannibal watched them. He lopped off totally unconcerned. I cursed I didn’t have my camera with me.


Of course one of the downsides of creating special nesting areas for ground nesting species is their attractiveness to predators. The avian equivalent to McDonalds. Little terns are particularly vulnerable, for when a kestrel or hobby discovers this take away food store, they will mercilessly plunder it. A few years ago when the favoured nesting zone was Gt Yarmouth South Denes, a particularly crafty kestrel aptly nicknamed Morticia, would enter the colony from one end and leisurely fly along the whole length of the nesting zone. Every little tern would frenziedly mob her, but crucially, unlike their larger, more robust cousins, would not actually make contact. Morticia knew this and simply led all the adults to the far end of the colony where she would quickly turn in midair, dive low, bullet through the colony a foot from the ground until she encountered a chick, grab it and make off. Very clever and ruthlessly efficient. She did, of course, have chicks of her own to feed.


Similarly I watched a marsh Harrier at Cley employing similar tactics. It would cruise high over the nest area, select a target, drop down and approach from low over the reeds. The avocets would go mad and twenty, thirty or more would bombard it with their blue, dangly feet, but to no avail. The Harrier would unerringly scoop his chosen victim from the water, even though the chicks would instinctively dive under the surface. You can only admire the enterprise of the raptor; it was simply exploiting a convenient food source. 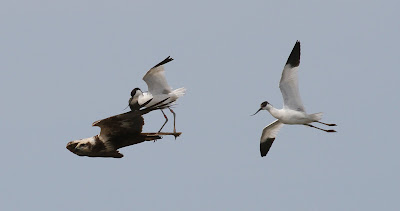 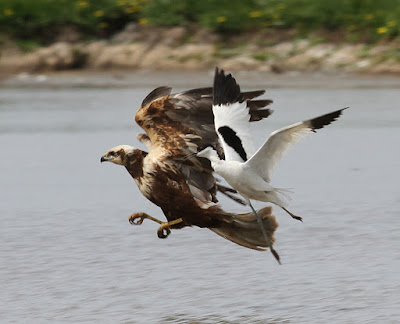 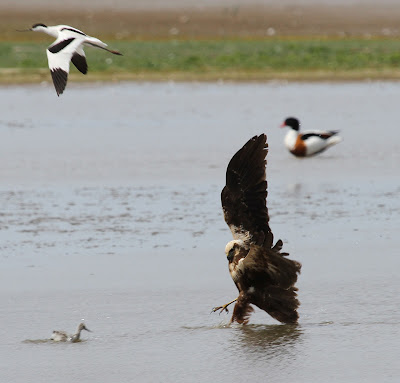 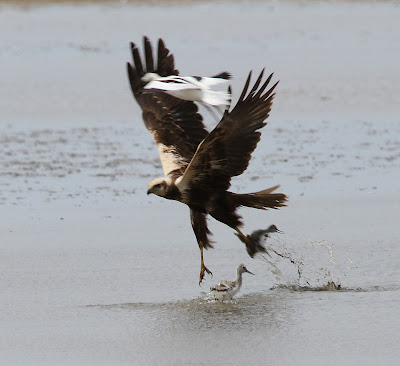 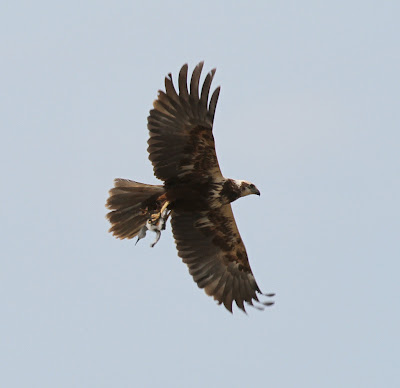 What with lapwings trying to guide their tiny petrified and bewildered chicks across a busy main road, the fledgling kestrel that mistook the shiny surface of a river estuary for solid ground, others that drown, starve or freeze, the odds of making it to adulthood are perilously slim. Spare a thought then to the rigours of being a young bird living through the first few weeks of life. It is a hostile, brutal stage, but it has been going on for millennia, certainly long before Springwatch brought such drama to our screens. Nature will ensure enough survive to further the species: left alone without housing, heating, supermarkets and so on, what do you think your chances would be?