We have a monster in the garden. A monster wasp: a hornet. This particular beast caught the corner of my eye a couple of days ago as I was lounging on the patio munching a sandwich. I saw an arrow of yellow and orange dive in the direction of our dead cherry tree and disbelievingly thought to myself that was a hornet. And it was. This enterprising individual has spent its time since then rasping soft, damp wood shavings from the depths of a hole made by a great spotted woodpecker. It visits every 30-40 minutes, fills its formidable jaws with wood pulp and makes off in a north westerly direction at amazing speed to the colony’s nest. It’s intriguing to speculate on how far this dedicated craftsman travels and how on earth it unerringly comes back to the very same hollow in the very same tree. It must be quite a journey since its departure route is high, but I don’t suppose I’ll ever find out. It does go to demonstrate the incredible powers of navigation such creatures possess, does it use landmarks as a guide, or the relative position of the sun, or a combination of both? It must be using eyes and an inbuilt compass because there is no possibility of following any scent trail or suchlike. Simply fascinating. 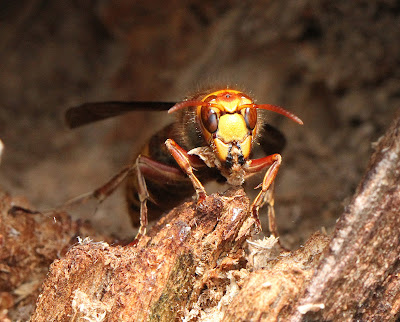 Hornets have undoubtedly become more widespread of late with sightings quite regular across the county. The sight of one rocketing into a common darter and knocking it to the ground thereupon to feast at Upton Fen was quite impressive. And they really are not aggressive to humans........unless provoked! I’ve stood just inches away from an active nest that was built in a hide at Hickling along what is now the Weaver’s Way, and I felt not the slightest bit worried or threatened. Leave them alone and they will simply go about their business and totally ignore you. 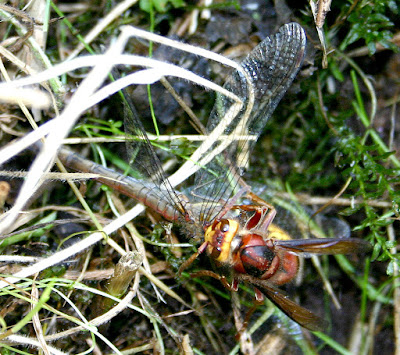 Having said that I did once witness a rather comical (not for the victim) attack by a hornet on a young warden helping with a moth trap at Hickling. Ironically this very amiable chap was telling me earlier that he was trying to work up immunity to insect bites by taking no precautions against mosquitos and the like, this on the basis his work necessitated regular exposure to those irritating bloodsuckers. As the moth trap was approached, an angry hornet flew out and somehow dived under the close fitting top this guy was wearing. The sight of him dancing like a marionette slapping various parts of his torso as the hornet stung was a hoot. Poor bloke got stung three times before the hornet found its way out and buzzed away. With that in mind I do approach moth traps with a degree of caution nowadays, just a little bit of me getting ready to run like hell!