on November 29, 2016
Be honest now, how often have you had the pleasure of being able to gaze out of your hotel window upon a colony of penguins basking in the soft evening light of a Southern Hemisphere spring? Not often I bet. As we watch it seems surreal; hard to believe that here on Sea Lion Island, the most southerly of the Falklands Islands, we are actually witnessing such scenes. For there they are, a colony of Gentoo penguins less than 100 metres from our window. We can hear them braying, and I dare say if we opened the window we could surely smell them. Wonderful. 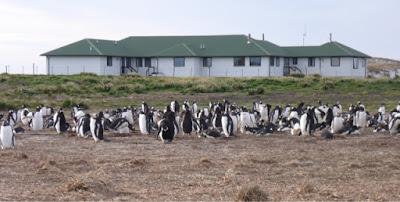 Monday 28th November, 6am, up and out stumbling into a strong, chill nor' westerly. It's been light here for the best part of 2 hours, the strong sun shining brightly from a clear spring sky. Perfect light for photography and there's so much to point the camera at. But we have a bit of quest this morning for just over the ridge there is an elephant seal colony that proves to be an irresistible lure to a pod of orcas that cruise into the shallows to pick off the pups. If you watched Planet Earth you will have seen the footage of the female orca wriggling its way into the pools to get its teeth into the back end of one of the poor unfortunates. There's a film crew here at the moment trying to capture the action, American chaps that have worked with Attenborough, but they have drawn a blank. At least with the black and white ace predators; they are happy with all the other wildlife they have been able to capture. So there we are wrapped up against the wind, but it's turning out to be quite pleasant as the sun gains strength. We follow the penguins. The gentoos and the Megallanic beat a path to and from their colonies to the sea and we waddle behind a party of four that speed up when they see us behind them. After a little while the grasslands, nesting grounds for Falklands skuas that thankfully have not quite set up home yet, give way to a shallow slope of flat rocks beyond which the South Atlantic waves crash against the shore. Scattered here and there are elephant seal pups, the colony now past its prime, so we trudge west a little way towards an area which must be the hunting grounds. On the way we encounter small colonies of gentoos placed on raised mounds, most are incubating eggs but there are some small chicks visible. The skuas, gulls, caracaras loiter awaiting their chance to pounce. On the edge of one colony a lone king penguin stands preening. We will see more of these later in the week. Hopefully. 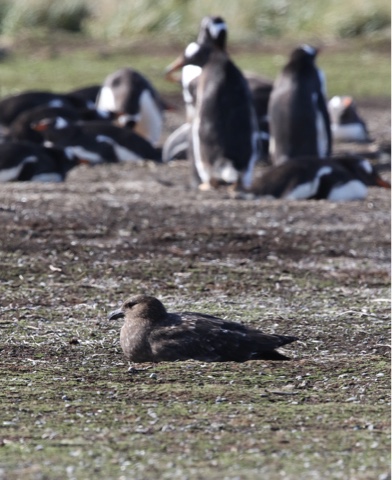 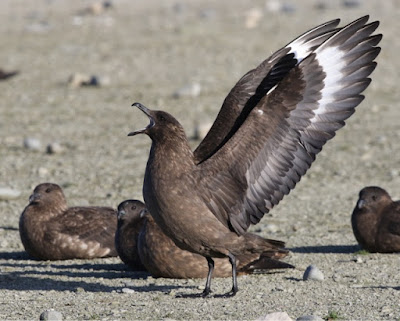 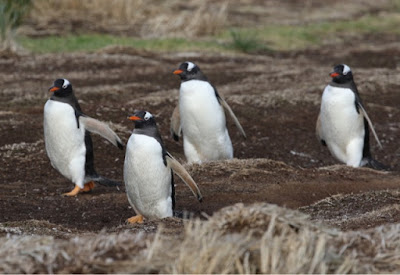 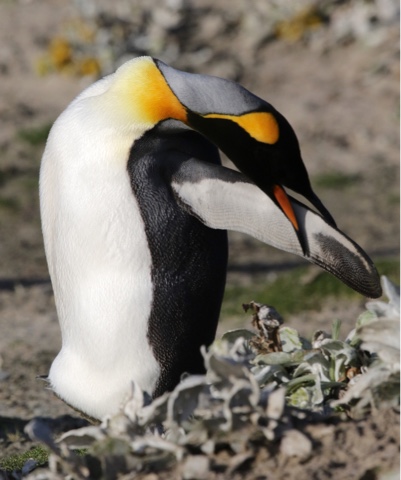 As we near the remnants of the elephant seal colony we are taken aback by the presence of a few huge Bulls, and I mean huge. These beasts are massively impressive especially when, as now, they start squaring up to each other and engage in mock fighting. It was half hearted stuff from animals that have already lost 30% of their body weight, but still quite a jaw dropping experience. No orcas appeared for us though. 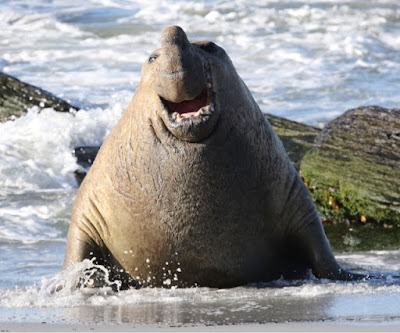 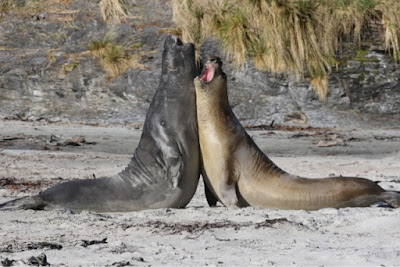 We instead had to be content with watching southern giant petrels gliding past within touching distance, their tubular heavy white beaks reflecting the strengthening light, Megallanic oystercatchers running after each other through the dunes, their yellow eyes staring wildly as they scurried past no more concerned by our presence than they were of the grass or the rocks or the waves. And then the penguins, comical, quirky, inquisitive. They have the odds stacked against them. It seems they are the fodder upon which everything else depends. Yet they are the most resilient and hardy of creatures; waddling half a mile to the sea, weathering the pounding surf, spending the day hunting, waddling back hoping to find their partner and nest intact. The skuas we walk past so close, I nearly tripped over one earlier, are setting up territories a few metres from the colonies. They time their breeding cycle so that in a few weeks, when they have their own chicks to feed, they can walk over to the nearby colonies and have penguin for breakfast. Nature is so fascinating and here in the Falklands it is all around and unfettered. No fences here, just the wild. 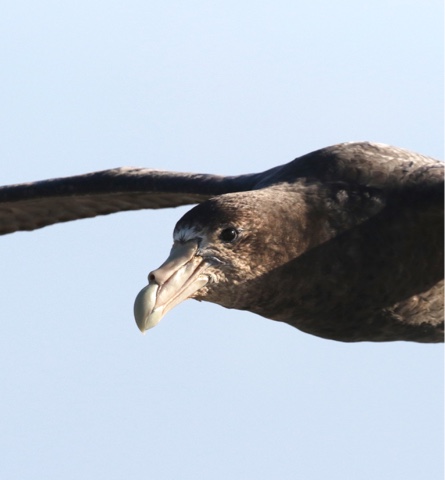 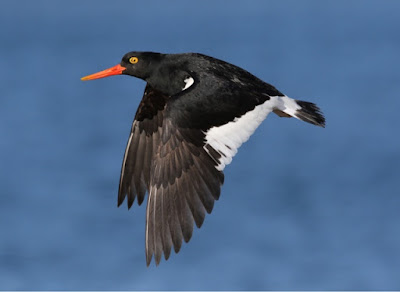 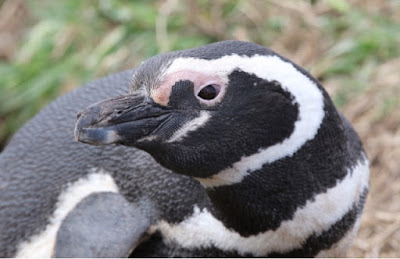 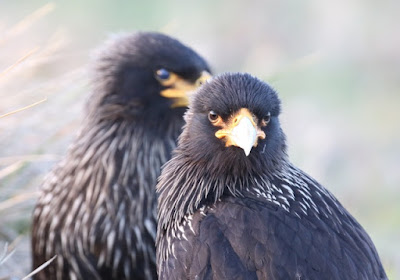 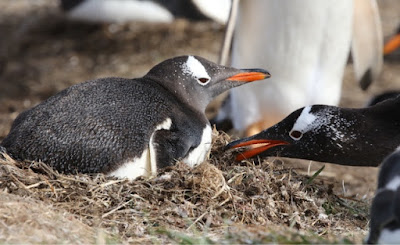