Contrary to expectations, the weather here on Sea Lion Island has been quite superb. Almost wall to wall sunshine beating down from a sky of purest blue. There is wind though and lots of it. In fact it is an ever present feature at these latitudes; it's not a question of whether it will be windy, rather how windy will it be. The answer during our two day stay has been pretty strong. But you get used to it. Don thick coat, hat, scarf and gloves and you're set. I'm loving every second.

Here on the island you are free to roam at will. There are few rules other than to keep a minimum of 6 metres from the Penguins and cormorant colonies, simply because if birds are disturbed from their eggs or chicks there is a queue of predators loitering around to nip in quick and steal them. Six metres is pretty close though, so sitting quietly whilst these lovely birds go about their business at such close range is an experience that is not easy to convey. As with many times on this trip, I've found myself having to shake my head and remind myself where we are and what we are doing. In this case it's sitting on a rock on an island where next stop is Antarctica, photographing colourful penguins, cormorants, meadowlarks, giant petrels and albatross. Looking across a bay of turquoise water waiting for the dorsal fin of an orca to breach whilst elephant seals of gigantic size spar on the beach below. Walking past skuas so close that you can see your reflection in their eye, following in the footprints of penguins as they waddle towards their fishing grounds. Truly breathtaking and humbling. 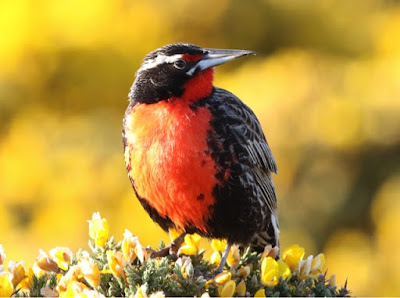 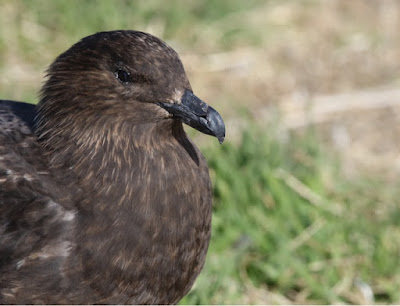 This morning we were driven to the far end of the island and deposited at a mixed colony of king cormorants and rockhopper penguins. Here we perched ourselves on the stratified rocks and simply drunk it all in. As with all seabird colonies, the noise and the smell can be intoxicating, or overpowering. Take your pick. Whatever your take, it is captivating and all consuming. Eyes, ears and nose take a pounding.

The cormorants, spectacularly colourful, were busy nest building, the males collecting nest material from rafts of kelp floating offshore. These they brought in by the beakfull to present to their mates patiently waiting, and occasionally defending, their nests. Being able to watch these creatures at close quarters for as long as you choose, allows an intimate insight into their lives. We looked on as they preened one another, mated, squabbled and affectionately caressed each other; pressing cheek to cheek, necks entwined, bills touching. There is surely more depth to these birds then we give them credit for. 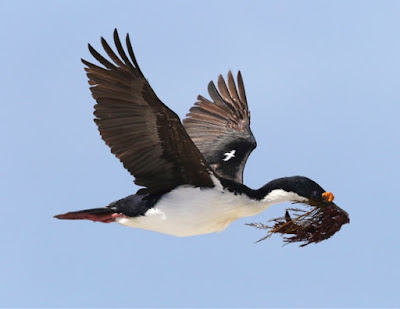 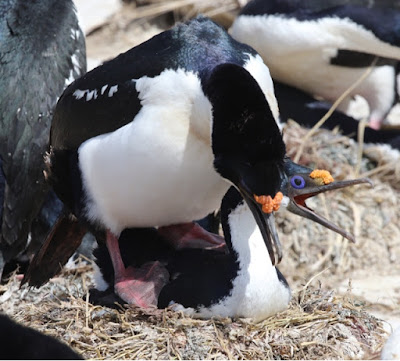 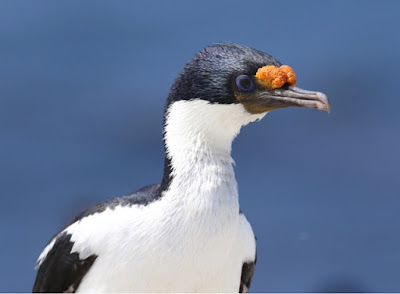 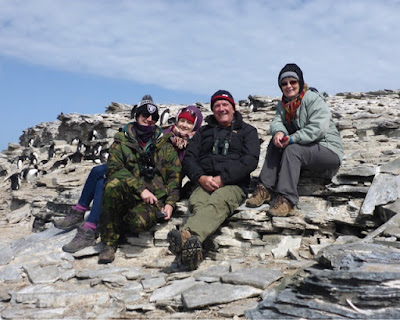 The rockhoppers were already on eggs, sitting stoically with yellow plumes dancing in the breeze. A trickle of birds, their mates back from a fishing expedition, lived up their names by hopping from rock to rock from the sea 30 metres below to the nesting site. Quite a feat for such a small bird. 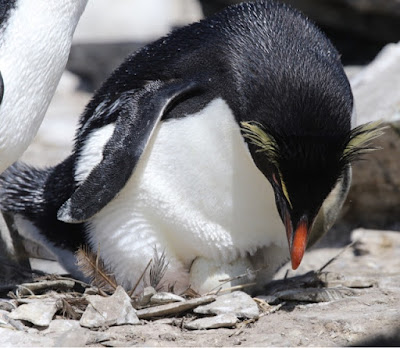 And out at sea black-browed albatross effortlessly skimmed the waves. 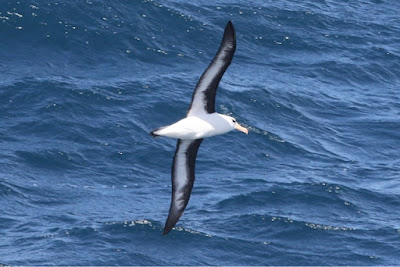 We broke the 3 mile walk back to the lodge with a picnic taken in the lee of tall stands of tussock grass. It wasn't long before an inquisitive striated caracara, Johhny Rooks to give them the local name, paid a visit, loitering around in the hope of a free handout. None were forthcoming. The bird moved on and so did we. 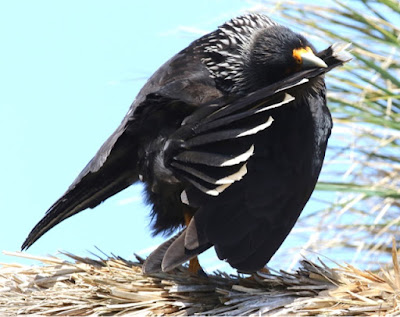 In the late afternoon, not wishing to waste any time at this marvellous place, we visited the elephant seal beach, sat on a rock and scanned for orca. The shallow pools on our right have been made famous by David Attenborough and his Planet Earth team as the location where a female orca will wriggle through dangerously shallow water in an attempt to catch hold of the back flipper of an elephant seal pub and thereby drag it to it's doom. The American film crew was still trying to capture the moment, but it is a long shot. They are out at dawn every day and trudge back for dinner with no orca footage in the can. So far. Our luck was in though, for after a short while the keen eyes of my lad saw a large dorsal fin break through the surface; there half way across the channel were not one, but two orcas cruising sedately through the cold waters. Awe inspiring. These are males that are waiting for the pod of females to appear. The elephant seals are safe for now. 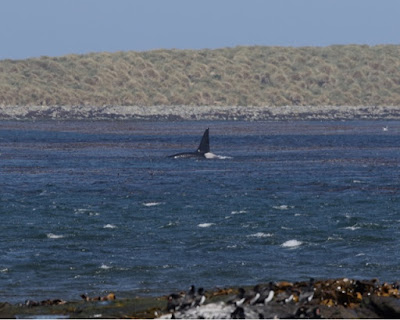 Then it was the turn of the Gentoo penguins to entertain and engage. The birds that have been out fishing all day return in the late afternoon to visit the colony. So, if you position yourself on the beach and keep still, these wonderful streamlined animals will surf the waves as they arrow towards shore before catapulting themselves onto the beach just a few yards to either side. With the crisp light behind us, the opportunities for photography were just perfect. Too good to miss. The grace, speed and sheer poetry these birds harness whilst skimming the water surface are so at odds with their ungainly posture on land that it is hard to marry the two together. Perfectly adapted to an oceanic life, they are forced to land to breed and moult. Here they have to deal with so many pressures, predatory birds, rats, starvation, burning wind, rain and sun. The more I watch, the more I conclude that these birds deserve great respect. They truly are the hardiest little creatures I think I've ever seen. 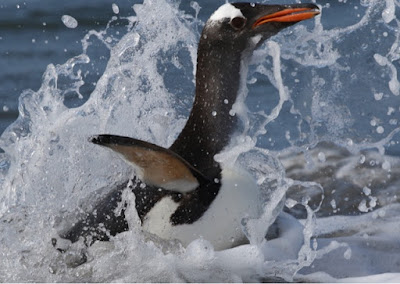 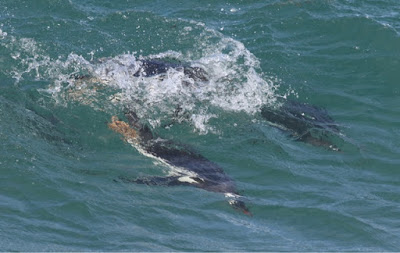 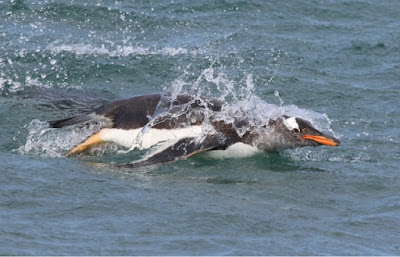 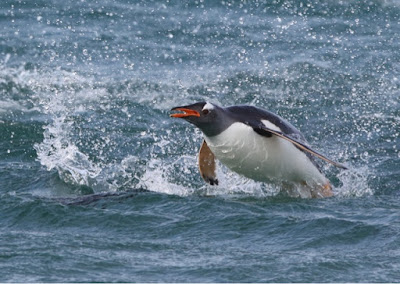 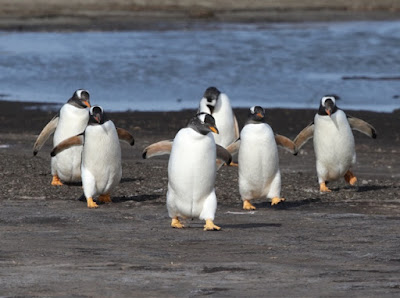 We waddle back with the Penguins to the lodge, shower, put up our feet and pour a glass of wine. Such a day in such a place. Thousands of miles from home in physical distance and experience. Within touching distance of the birds and mammals. As one with it all.