It is raining. As I sit here typing this post I am looking at a bedraggled woodpecker clinging to the underside of a stout bough, there to shelter from the deluge. The poor thing is clinging motionless at 45 degrees with its stiff tail feathers bracing it for what looks like being a lengthy stay. A few moments ago a greater kiskadee briefly perched on the back of an adjacent chair, called loudly, indignantly, at the thundering rain and flew off to find its own place to hole up for a spell. It is coming down hard and has been since just after dawn. At 5.30 as the first tendrils of daylight fanned through the trees, the air was fresh from the previous night's downpour; some promise of a drier day ahead. By 6.00 the first few spots of liquid dripped from a gloomy sky and before long cascades of water were flowing along the paths and forming puddles in the already sodden ground. The rains that normally arrive in December have decided to come early this year.

Yesterday, Friday, was a day of contrasts, a game of two halves as they often expound on Match of the Day. During the oppressively hot, steamy morning we boarded an open sided vehicle to bump and grind our way along sandy tracks through the Pantanal Savannah. Bird life was prolific here with frequent stops to appreciate the various species that are now into their breeding season; some singing, some tussling with rivals, some building nests or feeding young. The rains bring life to the parched land that bakes during the dry season; the wildlife takes advantage of the bounty following in its wake. We paused to discover that the broken branch of a tree being pointed to by our guide was in fact a great potoo roosting for the day, watch a roadside hawk fastidiously preening itself, admire a family party of burrowing owls sunning themselves from fence posts bordering the track, marvel at a pair of red-legged seriema strutting on ridiculously long legs through the dry brush. And all the while the dark shapes of vultures cruised the warm air above. 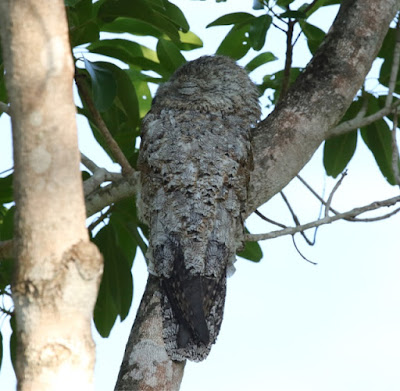 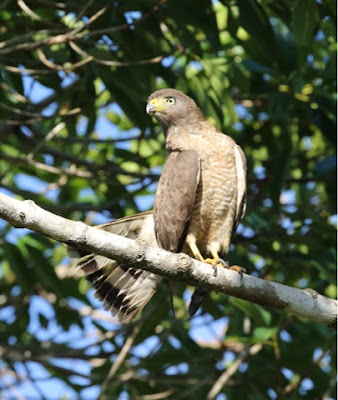 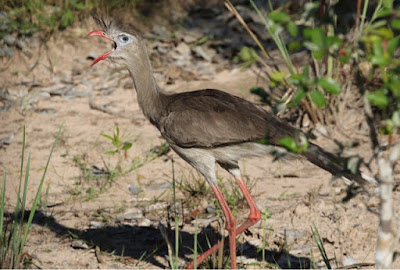 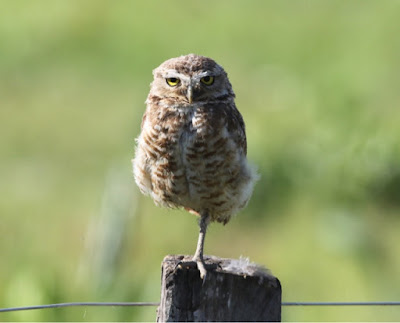 Virtually every bird seen here is new to us, but there was one that I have personally wanted to see in the wild for a long time. And our expert guide knew exactly where to look. Can there be any finer colouration on any bird than that adorning a hyacinth Macaw? I think not. We found a small flock feeding in a palm, a little skittish at our approach. They decided soon enough to find a more secluded feeding spot and one by one launched into the air to delight us as they glided past, their velvet, electric blue, feathering shown to perfection in the strong morning sunlight. Only nature can produce such finery; subtle tones and shades on a theme that no artist can match. The reason the birds are suffering here, as many birds and animals are suffering all over the globe, is thanks to the activity of man. The small coconut palms bearing fruits of specific attraction to the birds are grubbed up to make way for crops and grass with which to feed the cattle that roam here in numbers. The macaws are forced out. Happily the lodge where we are ensconced for a few days is engaging with the local farmers to educate them to the needs of the birds while also pointing out the benefits their presence brings in terms of Eco tourism. A classic win-win, which in this case means the macaws have an ample supply of nuts upon which to weald their tremendously strong beak and the lodge supplements the farmsteads with food. Such gorgeous creatures and a serious tick for me. Happy smiles all around. 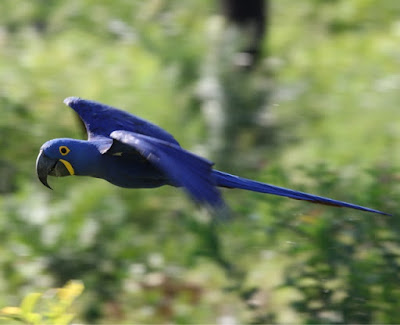 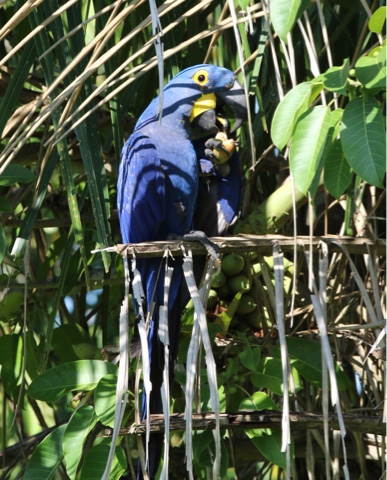 The afternoon was given over to a trip along the river Mutum in a motorised canoe, slowly examining the riverbanks for whatever birds and mammals felt like showing themselves. Of course the showy kingfishers are the main stars, sitting ever watchful on overhanging branches scrutinising the clear waters with bright beady eyes. I blogged a few months ago about my rather over ambitious thoughts of seeing all the worlds kingfishers, bee eaters and rollers. Whilst I stand little chance of fulfilling this aim, it is nonetheless quite possible to see all five of the South American kingfishers on this trip. In fact having seen three species in Ecuador I only need green and Pygmy kingfishers to complete the list. The quest was on. So, for the next couple of hours eyes and ears were strained in an attempt to locate these small and obviously elusive gems. We saw several brazen Amazon kingfishers and lots of ringed kingfishers, but nothing new. That is until it began to rain when a small green bird shot across the river in front of us and disappeared into the overhang. 'Green kingfisher' came the cry from our guide and with that another minor, to many insignificant, to me immensely satisfying, goal was reached. Only one more to go, but sadly this is where the adventure ended, at least for that day. The heavens opened and then some. All in the canoe frantically pulled on the plastic ponchos provided, covered cameras, binoculars and other things of value with any waterproofs to hand, gritted teeth and braved the angry elements. Despite worrying about my optics, I actually enjoyed the feeling of fresh cool rain on my face. Zipping around, blasting into heavy squalls with curtains of water lashing all around was quite exhilarating. It was only later I discovered a sodden wallet full of damp and soggy bank notes which took the shine off the experience a little. 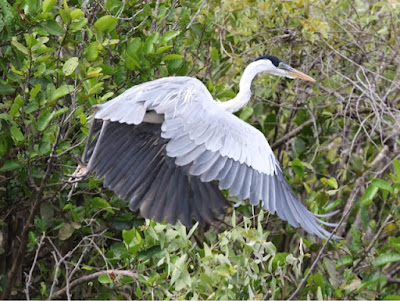 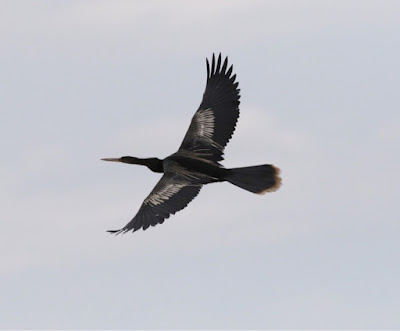 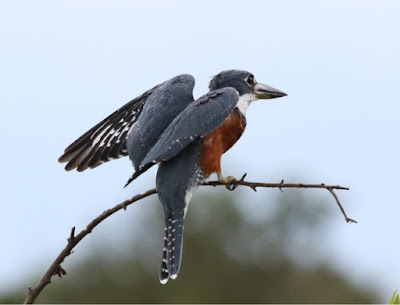 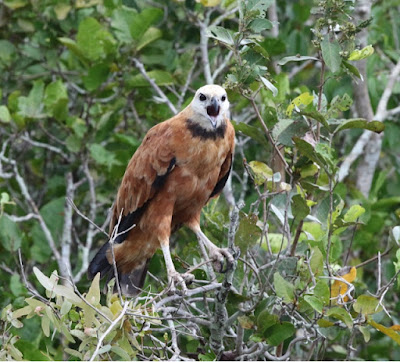 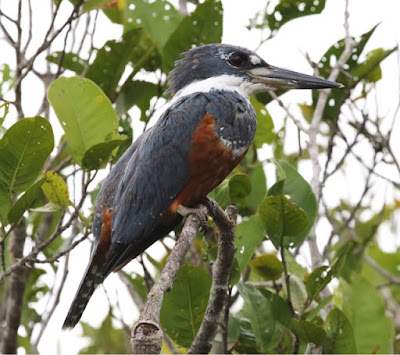 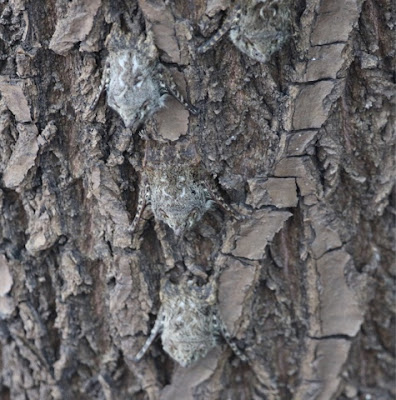 And so we come to today. It is now early afternoon and the rain is still falling. Toads and frogs are having a ball, Muscovy ducks have paid a visit and ibis probe the wet earth with long decurved beaks. There is talk of a walk around the site a bit later, but I'm going to crack open a beer and relax. I'm no weather forecaster but it really doesn't look like we're going anywhere, anytime soon. There's always tomorrow.