Let Me Take You down To Rio

on November 21, 2016
And here we Are in Rio De Janiero, the River of January, so called apparently because when the Portuguese explorers 'discovered' Guanabara Bay on 1st January 1502, they thought it was the outlet from a river system. At least that's the popular explanation, another is that 16th century Portuguese  differed from the modern day lingo and 'Rio' then applied to any body of water; sounds much more plausible. 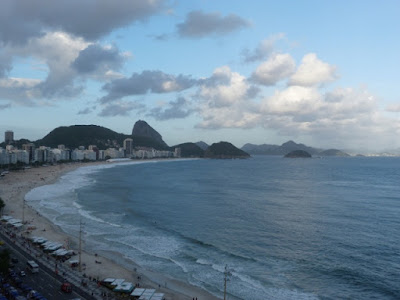 Whatever the origins, the city now sprawls for miles, snaking along valleys between granite hills thrust from the earth like so many giant shark teeth. Some 11 million people call the city home and that number is growing all the time. Inflation is rampant, corruption amongst officials a kind of recreational pastime, housing cramped and squalid, architecture crumbling. It would also be wise not to fall into the sea and take a mouthful of the water because water is not the only substance that will enter your fragile system. Over 50% of the sewage created by the multi-hued population is pumped into the ocean untreated. Yes folks there is an awful lot of crap in Rio. You may recall that before the 2016 Olympics the authorities tried to clean up the areas where triathletes had to perform their swimming element. I guess some progress was made, but it is estimated that it would take 20 years of effort to clean the environment and get the sea back to health again. And that isn't going to happen.

For all that, the natural surroundings of the area are quite spectacular and Copacabana Beach a delightful place to chill. Brazilians are a very easy going, laid back bunch who are very friendly and accommodating. There are hawkers on the beach trying to sell their wares, hats and cool drinks mostly, but if you shake your head they smile and move away. No unnecessary hassle or pestering. As I look out of my hotel window I can see sugar loaf mountain to the left, the highest peak in a chain of hills curving round and reaching into the Atlantic Ocean. To the right is a promontory, home to a fortress complete with big guns that would defend the bay from any attack. Inbetween all of this is a curve of whitish sand several kilometres long, dotted with bars and lifeguard lookout stations, volleyball nets, football posts and mini gyms. The bronzed bodies of sun worshippers laze around or parade along the shoreline seeking admiring glances. But it is a place for all kinds of people of all shapes and sizes; a place for relaxation. However we have been warned several times of the potential for muggings in the beach area. Because of this we take nothing with us when we leave the hotel to stroll along the prom, accept a few bank notes and a small compact camera that fits handily into a breast pocket. Nothing much to interest any local lads who take delight in plundering the wealth of tourists.

Yesterday we spent in true tourist mode being safely escorted by our excellent guide for the day to the major sights of the city. First up the iconic statue of Christ the Redeemer that we've all seen many times on TV or in movies, perched as it is atop a hill overlooking the city at an elevation of 710 metres. The view from the top is indeed spectacular if a little difficult to appreciate with hundreds of other tourists jostling for space. Gotta be done though. Next was a cable car ride to the summit of Sugarloaf Mountain, not so tall as Christ at only 395 metres, but giving a beautiful panoramic view of the curving beaches all along the coast. 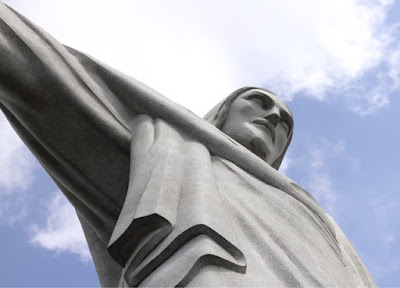 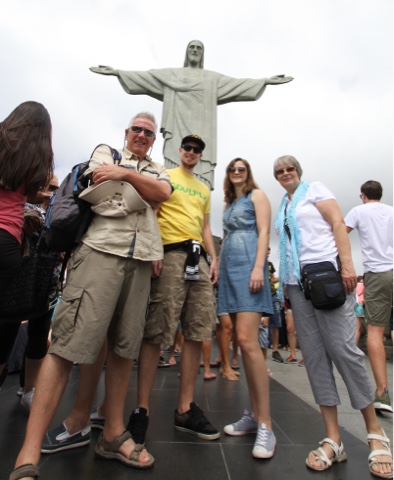 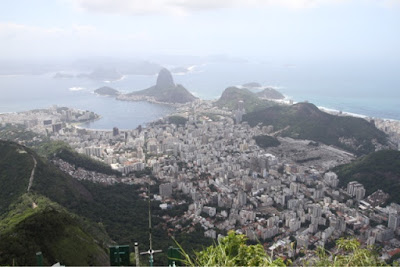 Today we spent the morning ambling along the beach, getting splattered by waves that somehow crept up unobserved and soaked our lower portions. The afternoon we spent at the Botanical Gardens.

So here is where we move away from the more traditional and normal activities associated with a seaside holiday and enter the realms of Madden World where as most people ooh and ahh at a huge granite statue of our saviour, the numpty that produces this blog spends his time trying to photograph black vultures, wondering what those swifts are or oohing and ahhing at a king vulture soaring over the valley below. Each to his own. The wildlife watching opportunities here are not obvious to the majority of folk, but they do exist and in fact are quite spectacular in their own way. For example while we were sitting at the rooftop bar yesterday evening we noticed quite a few magnificent frigatebirds circling over nearby peaks. Numbers of this large angular seabird slowly increased untilI I reckon about 500 birds came in from a days pirating at sea to gain a bit of height over land and then drift away in small groups to their roosting site. At least I imagine that was what was going on. And then the black vultures come quite close when you're 16 floors into the sky affording great views as they soar back and forth looking for something to scavenge. From our room we get a commanding view of the ocean and I've noticed brown boobies (not on the beach) moving offshore, cruising low over the waves in effortless style. Amongst them occasionally are large shearwaters which may be Cory's or may be something else - too distant to see clearly. We've even seen a house sparrow. 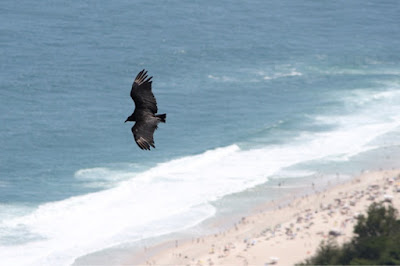 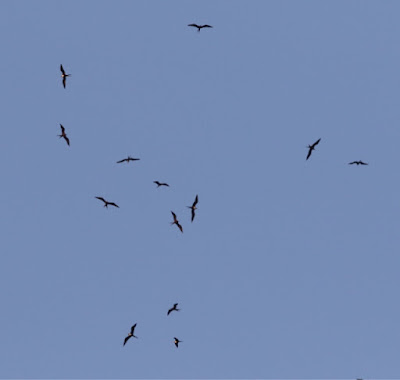 At the Botanical Gardens today, an oasis of green and calm amongst the traffic noise and mayhem of the city, we saw several rather wonderful things. I say we because in all honesty I didn't find a thing myself. My son and daughter-in-law found a magnificent pair of channel-billed toucans that we were able to observe feeding at close quarters. These rather spectacular birds have become quite used to people and as long as you are quiet and move slowly will go about their business unperturbed. Beautiful birds. Then my wife noticed a small hawk perched on a low branch, a roadside hawk I believe. This gorgeous creature simply sat there as we watched it from a few metres away scanning the ground for any movement. Then the kids again with a much larger hawk sitting some distance away which I haven't as yet identified. To cap it all the waiter at the cafe, noticing my binoculars and camera, called me over to a small tree to point out a walnut sized hummingbird's nest within which a nearly fully grown chick resided. What a wonderful thing to see, so tiny, so dainty. It's good to have a little help now and again. 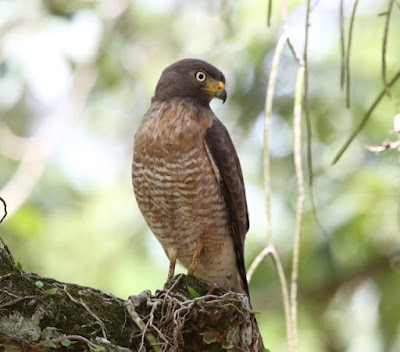 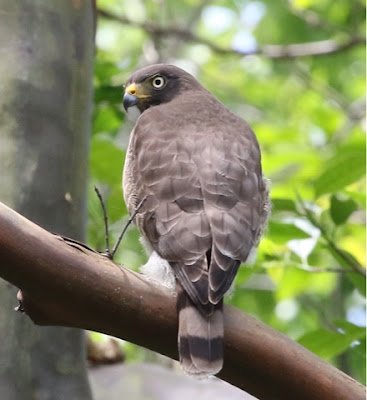 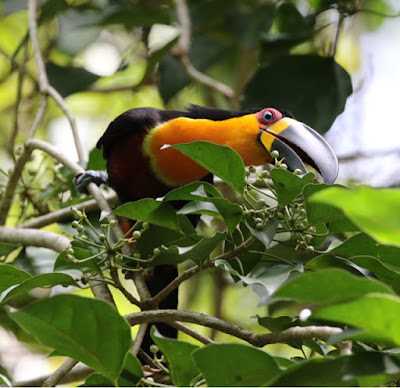 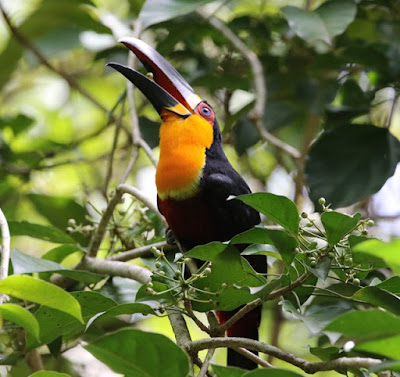 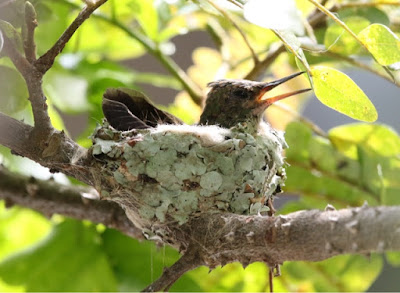 After that excitement it is time to return to the hotel, sit by the rooftop swimming pool sipping a beer or a cocktail, watching the frigatebirds cruise by as the sunset stains the clouds over Copacabana salmon pink. As the hot of the day gives way to a sultry evening, all around the bay a sweeping arc of floodlights illuminate the sands leading the eye to the misty outline of the hills beyond where light of houses twinkle like so many stars. A gentle breeze springs up and I have to pinch myself to realise where I am. The only thing to do is allow your senses to be intoxicated, drink it all in and smile.