on November 15, 2016
My 5.30am alarm was almost drowned by the hammering of an early morning downpour. I rolled over thinking that it was pointless expecting my 6.00 appointment with our guide to go ahead. But then how many other opportunities would I get for a dawn paddle in a canoe on the waters of the northern Pantanal? I hauled myself out of bed, poked my head out of the door to find a gloriously fresh and clear morning. The heavenly fluting of thrushes, the harsh screeches of the guans, the wolf whistling of the yellow-rumpled cacique greeted the emerging rays of the sun. If it was good enough for them then so it was for I.

We walked through the meadow to the edge of the lake, passing a family group of capybara and cackling green ibis along the way. Within a few weeks this whole area will be submerged with the waters reaching to the very edge of the lodge itself. The rains will slowly fill the basin that is the Pantanal to a depth of 2 metres or more and will transform an area the size of the UK into a huge water world teeming with acquatic life of all kinds. For now though we had an hour to gently float along the shallow margins of the lake in search of a Pygmy kingfisher that my guide was determined to find. 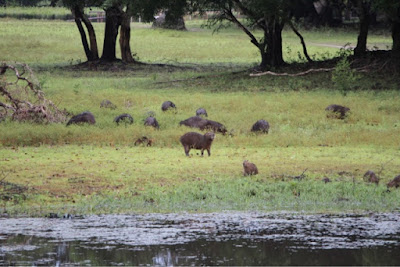 Slowly slipping away from the jetty, sliding as if across a mirror, so still and undisturbed was the scene before us. No human sound at all: nothing except the gentle ripple of crystalline water as we glided along, the echo of birdsong gleefully greeting the dawn, the slap of fish escaping our intrusion and the occasional throaty roar of a bull caiman advertising his wares. And all around the reflected image of sun spangled clouds. 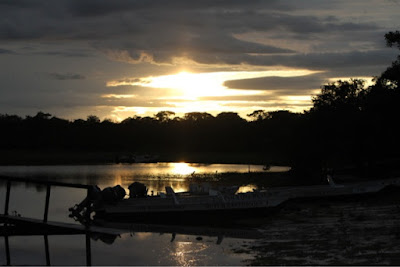 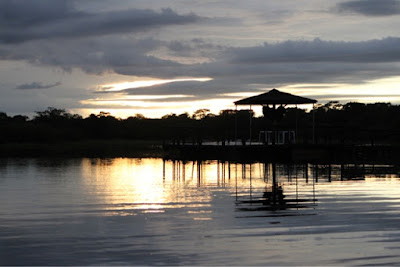 We spent our time drifting quietly into the shallow hyacinth cloaked margins but could not connect with the little kingfisher we sought. It didn't really matter though; just being there was enough. What we did see was a troop of giant river otters that were fishing amongst the lilies. One had caught a large fish and with this clamped firmly in its jaws raised its head and long neck out of the water to have a good enquiring look at the intruders. My guide can recognise individual animals by the patterning on their necks; she knows there are three separate groups that inhabit the immediate area. She can imitate their anguished calls which to my ears sound as if the creatures are in pain and whining to each other about their ills. Weird and wonderful. 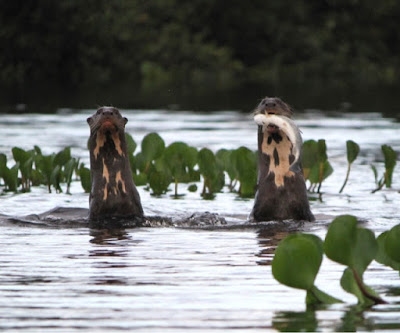 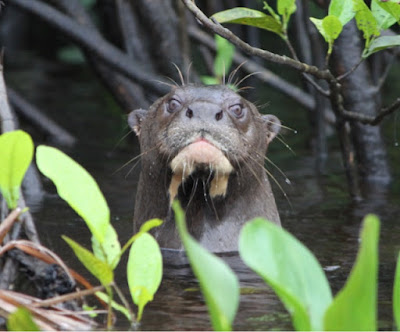 So, no little kingfisher, but what price an experience like this? How lucky am I to be able to see, smell and drink in the sights and sounds of one of the worlds true wilderness areas. Can I give anything back? Not directly, except that talking to people about their passionate love for the region, trying to understand the problems that it faces, giving them encouragement in their endeavours may help just a little. Asking someone to try and find me a little kingfisher is in itself an inconsequential thing, but allowed us to talk about her hopes and fears and maybe, just for a small amount of time, allowed her to immerse herself afresh, through my eyes, into the wonders of the natural splendour she works in every day. In some small way perhaps it also allows you to appreciate what we all have around us and how fragile it can be. In contrast later that evening at the airport, we watched a little boy laughingly stamping on flying insects that had become trapped in the building, an act of human brutality compounded by his ignorant mother who, with a proud smile, continually pointed out to him another hapless creature he could despatch with a stomp of his foot. The Pantanal, Brazil, the World, faces many challenges: exploitation of wildlife (here it is over fishing and persecuting of Jaguars that sometimes attack cattle), pollution, human encroachment - the usual thing - all of them are man made and based on greed and ignorance. Thank goodness some people care enough to devote their lives to conserving the place because without them there really would be no hope.