on November 17, 2016
The head of the ocelot, such a cryptically patterned beast, could just be seen behind a screen of grass as it sat motionless beside a shallow pool. It's white ear patches reflected the light shone by our guide who, ever alert, had spotted the cat from his vantage point sitting on the front of our jeep. Our small group, all British, whispered to each other in excited tones; all trying to get a fix on this most unexpected of finds. After a little while the beautifully marked animal smoothly sauntered across our field of vision drawing gasps of delight from all. The grace of big cats, lithe of limb, just has to be admired. More so when seen in the wild, in a foreign land with thousands of croaking frogs, cicadas and the cries of night birds echoing all around as the sultry heat of the evening continues to draw sweat.

We've moved south. A three hour drive took us from Rio Mutum to Cuiaba where we boarded a late evening flight to Campo Grande the gateway to the southern Pantanal. After an overnight stay and a further 4 hour drive we find ourselves in the rather wonderful and aptly named Caiman Lodge. Our room overlooks a large wetland where jacanas, capybara and caiman prowl. Over all grey-breasted martins hawk the plentiful insects to feed young in nests squeezed into gaps in the roofing just above our heads. Within minutes of arriving I watched with mounting trepidation a small caiman try its luck with hunting a brood of four well grown jacana chicks. The birds knew something was not quite right, but since the reptile showed its mastery of immobility, they couldn't quite work out where the danger lie. The more experienced parent bird knew better however, squawking an alarm with wings, gathering her progeny and moving them away. The drama continued as they stepped across the lilies on their elongated toes. Another caiman, bigger, covered in weed, more stealthy, rose from the mire and lunged at the birds. They scattered in panic and luckily for them managed to escape the jaws that appeared from the waters to consume them. 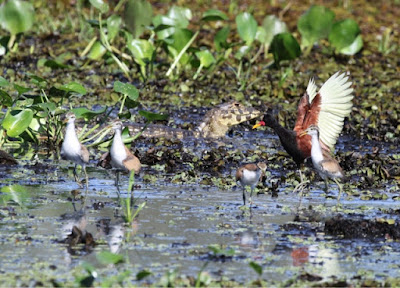 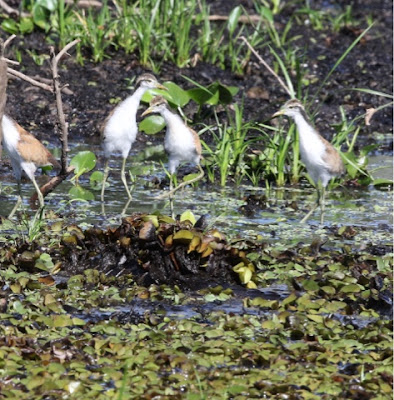 The days here fall into a pleasant routine of getting up at about 5.30am, stepping out onto the verandah to watch the sun rise through mist rising from the lake before breakfasting and heading out around 7am for a drive along the many trails crisscrossing the huge estate. It is all quite leisurely with frequent stops to admire any bird or animal of interest. The land here is flat with mixed Savannah, woodland and open water. The raised dirt road was made by scooping out sand and gravel directly from either side. This has resulted in a series of shallow ponds forming at regular intervals where Ibis, herons, storks and spoonbills prowl around on their long scaly legs looking for any movement betraying the location of a frog or fish. The lush forest provides food and shelter for many species of bird and provides cover for peccaries, lizards, and tortoises. We return for lunch at about 12.30 and then are free to lounge around until 5pm when we go out for our evening/night safari scanning the fields and trees for nocturnal wildlife. It is all rather excellent. 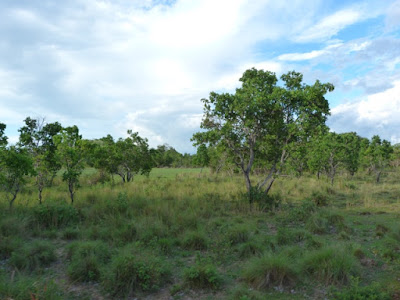 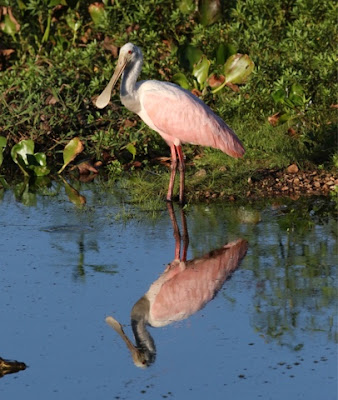 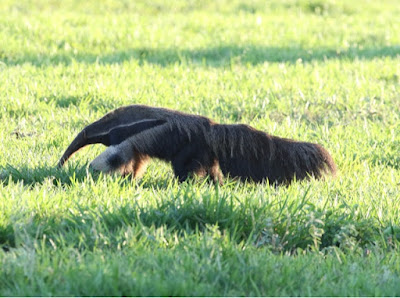 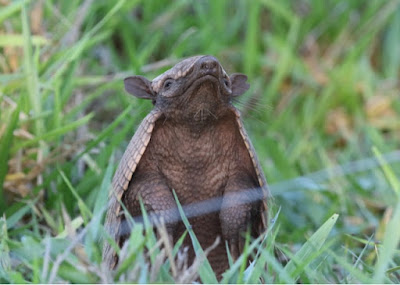 There's something altogether magical about looking for wildlife after dark. The senses are sharpened, the excitement palpable as the expectation of an encounter with an animal not normally seen or heard makes you strain eyes and ears to react to the slightest movement. The ocelot was not the only animal we encountered on our debut night excursion here: far from it. Giant anteaters, armadillos, tapir, owls and nightjars feature heavily in the program. What a delight it is to sit quietly watching these wild animals go about their lives unconcerned by our presence.

But we really don't have to travel very far to experience wonderful wildlife. 200 yards from the lodge is a fence which is used by a pair of burrowing owls. They gaze lazily at us every morning as we pass in the vehicle, slowly turning their heads to watch us through half opened eyes. In a tree just beyond resides a pair of bat falcons. As I type we have just returned from a walk with the guide to look at these gorgeous birds close to. One of the owls amazingly sat on a post 10 feet from us and didn't even bother to look around until I whistled to attract it's attention for a picture. One of the falcons whizzed in over our heads and proceeded to sit on a branch to preen in full view. Exhilarating. 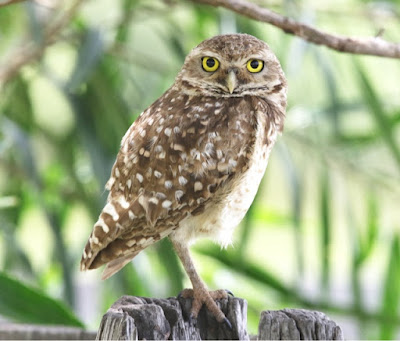 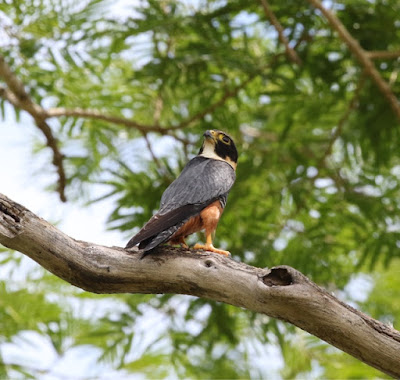 I can look up from my seat to see the martins perched on the beams of the gazebo, parrots and parakeets screech past on whirling wings whilst a tiny hummingbird hovers within touching distance. Occasionally there will be a commotion from the nearby shallows to denote a tussle between capybara or a caiman slapping the water to proclaim his right to territory. Myriad frogs belt out a chorus of croaks and squeaks, kiskadees sing their names and vultures sail by on broad black wings. It is, all things considered, a rather pleasant way to spend some time. Another beer will round it off nicely I think. 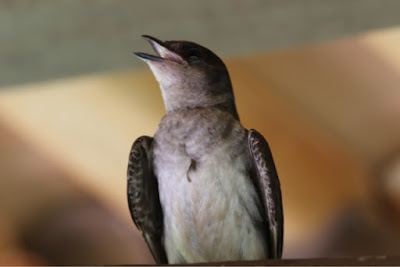 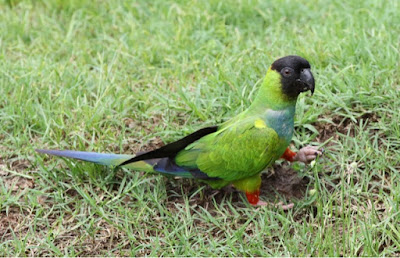