on December 09, 2016
El Calafate, a pleasant enough medium sized town in Argentine Patagonia, is named after a berberis. This plant is profound hereabouts and the berries are used for making liquor, for putting in pies or simply for eating (don't try this at home folks). Another pinprick in the romanticism of my imagination. I expected the name of this lakeside town in the deep South of Argentina to mean 'The Gateway to Heaven' or something. Instead it is named after a small shrub. We find ourselves here for a couple of days having been driven for 6 hours or so from our last base in Chilean Patagonia. The drive was uneventful, along long straight roads, except for a frustrating wait at the border stuck behind a coach load of Chinese tourists. Here we queued for the best part of an hour whilst some bored national guardsman decided whether or not to stamp our passport. Petty officialdom drives you mad at times. It wouldn't have been so bad had he not stopped what he was doing every couple of minutes to chat to his mates. South America! 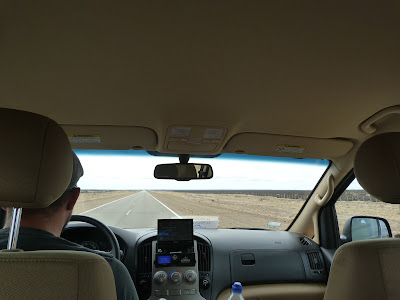 We played tag with this particular bus full of orientals on the long drive across the empty, harsh, wind-blasted steppe. We overtake them and stop for coffee/toilets, they pass us and we find ourselves behind them again. We arrive at our hotel and guess who arrives a few minutes later. Good fun. The landscape all around though is very barren. Ranches, or Estanchias, are huge; they have to be. There is simply nothing to sustain sheep or cattle unless you have a lot of land over which they can roam looking to eke a few calories from stunted grasses. Now and again water, in the form of a narrow river, will create an oasis of green and suddenly the landscape is transformed. But only for a few kilometres; it soon reverts to barren wilderness. Ancient glaciers have carved this land, gouging out huge valleys and escarpments, leaving behind hundreds of miles of bare rock, boulders and gravel. The thin layer of soil accumulated over millenia struggles to support life. We saw very little.

However it was to a glacier, a real active one, that we were taken yesterday. The Perito Moreno Glacier to be exact, an hours drive along the blue lake Argentina, Lago Argentino, that is formed by the melting ice that falls from the glacier's face. It is an awesomely impressive natural monument, forming the focal point of a National Park of wooded alpine slopes and meadows that are able to flourish due to the sheltered nature of the valleys and the abundant rainfall. No rain today though. A boat, uncannily full of Chinese tourists.......,.no can't be, takes you within 300 metres of the north face ( it cannot get closer for reasons of safety) where you can look in astonishment at the wall of ice towering 70 metres above you. The glacier itself is some 5 kilometres wide, a fact difficult to grasp when all you can see is a wash of white. There is nothing to give it scale until what looks like a small snowball breaks away from the face. It takes a second for the sound, a loud sharp crack, to reach you and then for the boom as the boulder of ice, not a snowball after all but a mass probably weighing tonnes, splashes into the lake. Snap, snap, snap but the pictures struggle to convey the sense of magnificence. 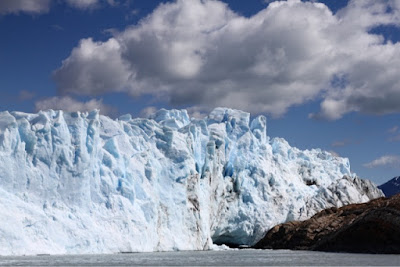 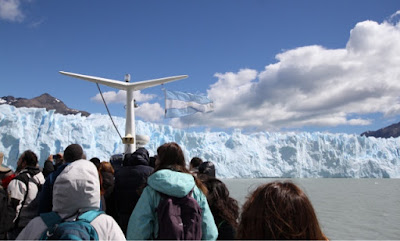 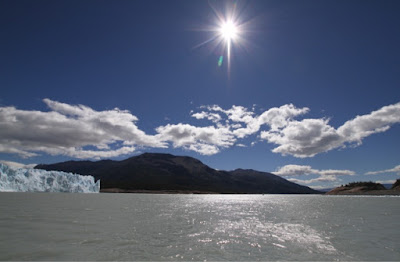 After the boat trip, that weaves between ice bergs of wonderful smooth shape and electric blue radiance, we were taken to an area that overlooks the glacier's both North and South faces. Here some stunning views are to be had looking back along the snaking river of slowly moving ice into the heart of the Andes themselves. The ice moves at the rate of 1.5 metres a day and is always disintegrating as it funnels into the narrow channel at the mouth of the lake. The accumulated ice we were looking at fell, as snow, between 400 and 900 years ago. These kind of facts numb the mind. To think the chunks of ice we were watching plunge into the near freezing water were laid down possibly at the time Norwich Cathedral was being built; it has taken all that time to slowly, but grindingly surely, reach the end of its journey. You can only stand and stare. 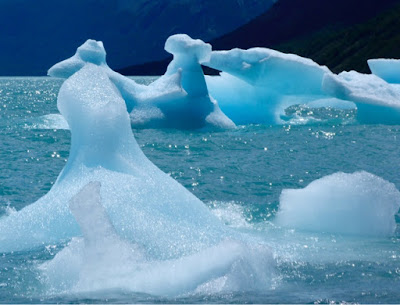 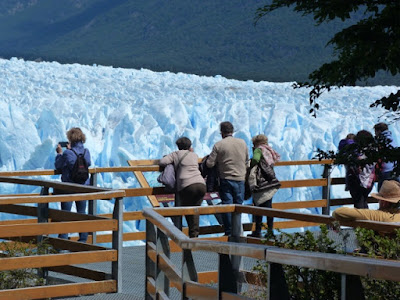 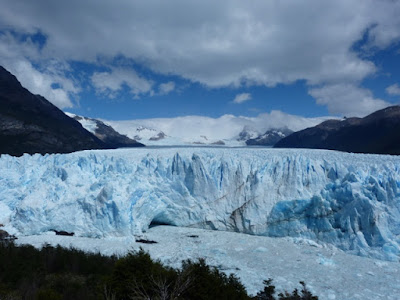 Every few years the press of ice, forming a chevron, blocks the flow of water in the lake. When this happens a huge bridge forms which eventually collapses under its own weight. That sight must be quite something; the noise can apparently be heard 50 kilometres away. I believe it. We were lucky to witness one or two sizeable collapses ourselves and the noise is truly frightening. The raw power of nature is something man can never really conquer. 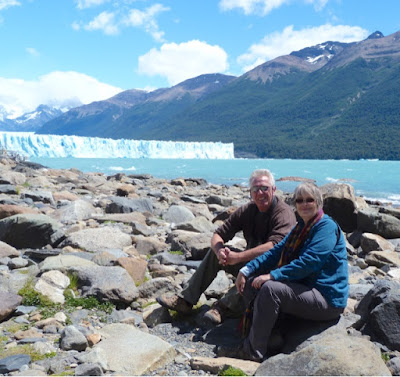 That was yesterday. Today we fly to Buenos Aires. In fact I'm writing this blog from the aircraft cruising high in the heavens, buffeted by a strong crosswind blowing from the bowels of the Andes. I'm sitting here with another group of Chinese folk - surely they can't be the same ones - amidst coughing, spluttering and sneezing. If I don't catch something it'll be a miracle. And why are those skirts the air stewardesses wear so damn sexy. We had the morning to kill before we caught the flight, so walked the short distance to the Laguna Nimez nature reserve, an area of wetland and shallow dunes beside Lago Argentino where Chilean flamingos dwell. Here we walked the circular trail in the teeth of a howling wind ( the same one rocking our 737), which was not very pleasant. However the birdlife more than made up for the inconvenience of once again having your eyebrows blasted to a place roughly above your ears.

There were certainly flamingos on the lagoons, shining pretty pink and red as they fed or stood on a single leg huddled into the wind. The mineral rich waters must provide ideal conditions for the algae upon which they feast to proliferate; the birds were certainly sporting rich livery. Other than adding bright colour these living croquet sticks were not doing very much. No, the chief entertainment was provided by a pair of cinereous harriers and a mottley group of chimango caracaras occupying an area of reed fringed water. I've never been privileged to have such beautiful graceful birds come as close. So close I could not track their movements through the camera viewfinder which they filled as a blur when they sped past. The harriers presumably had a nest secreted amongst the short reeds and spent a lot of time seeing off the scavenging caracaras, providing dramatic chases for our delectation. Once the male brought in a prey item for the female, a chick of some water bird, and the pair made a food pass just a few metres from where we stood. The female then nearly hit me as she buffeted her way back into the reeds. Incredible. Back home it is sometimes possible to witness this kind of behaviour with our marsh harriers, but never anywhere near as close and never with birds that are so tolerant. Such an unexpected and uplifting episode. Snap, snap, snap and perhaps on this occasion you can capture the sense of the magnificence played out before us. 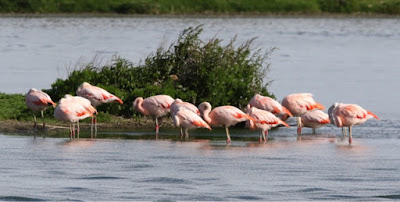 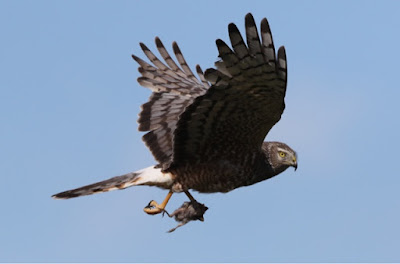 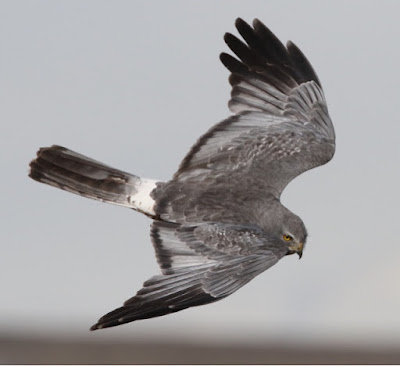 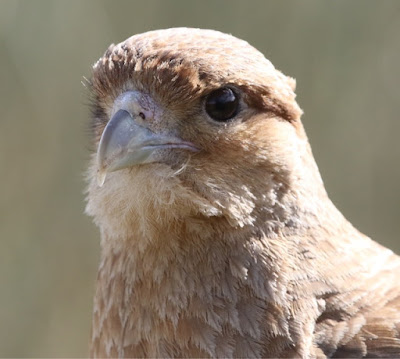 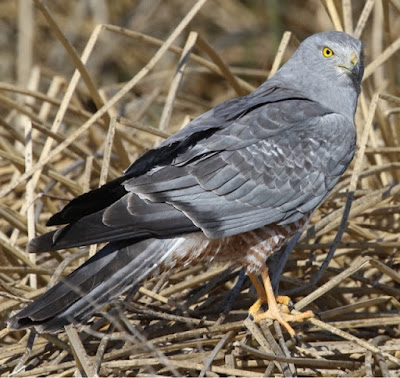