on December 07, 2016
We've moved from a windswept Falklands to a windswept Patagonia. A hiccup or two on the way with cancelled flights, missed pick ups and frantic telephone calls and emails. But all came good eventually. The first short leg of this stage of the trip (shortened even more by the aforementioned cock ups) finds us on the edge of Torres Del Paines National Park in Chile ensconced in a delightful complex called Patagonia Camp.  One or two of the waiters live up to the name, but everyone is very friendly, efficient and welcoming. Patagonia apparently means Big Feet, and there was me thinking romantically that it meant 'Land of the Towering Peaks' or some such. It was, so we are told, given such a mundane, nay stupid, name by early European settlers because the natives were considerably taller than the average 16th Century Portuguese/Spaniard; malnourished midgets all. Ferdinand Magellan is credited with being the first European to set eyes on the Patagones Indians chiefly by seeing huge footprints on a beach. Hence the name given to the region. And the name has stuck. 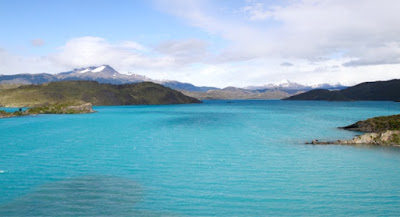 Whatever, the landscape is magnificent, the view from our luxurious tent (yurt) breathtaking, the colour of the lakes the deepest, purest blue, disconcertingly several shades darker than the sky reflected therein. Torres del Paine means Towers of Blue and it is this overriding colour that gives the park it's name. I feel quite pampered as I lounge about surrounded by cushions of all shapes and sizes, mock fur rugs covering the floor, tapestries draped on the walls and a selection of nibbles and a bottle of red left by the maid. And all I have to do is raise my head to see this..... 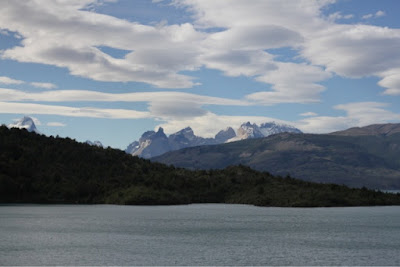 We only have a single full day available to us here and elected to spend it on a 5 miles 'fauna' walk offered by one of the resident guides. The starting point for this particular hike is about a 90 minute drive from the lodge taking you through some rugged terrain with walls of stratified rock thrust at crazy angles into the rarified air. These rocks are testament to some violent activity when our planet was much younger and record the laying down of sediments which contain evidence that once this whole area formed the sea bed. Look closely and fossil remains of marine creatures can easily be seen.
The impressions from a moving vehicle are ones of wide sweeping moorland through which dark masses of granite emerge and career towards the heavens. The tallest peaks are covered in an icing of glacial white where cloud forms to the leeward side creating tendrils of wispy smoke flowing as if from a factory chimney. Here and there are stands of stunted, skeletal trees, victims of past fires, and dried, wind blasted depressions where water can pool for a while before evaporating into the atmosphere.

And a glance upward will sometimes reveal a black form of a soaring condor surveying the wide open terrain, it's home and domain, for any animal that has found living here beyond its ability. 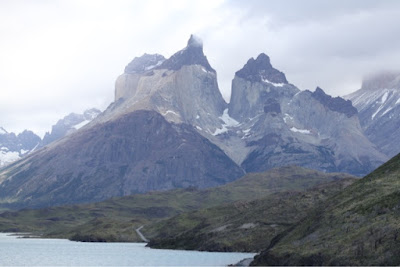 Our stroll across the steppe would have been lovely in the subtle warmth of an English spring day, but here the wind sheers across the stunted vegetation, slamming into your face and rendering everything an effort. Your hat is tugged helter skelter threatening to blow away and take your head with it. Life is hard out here and the trail littered with skulls and bones of guanacos, some of which may well have fallen prey to a puma but most probably succumbed to the ravages associated with living on the edge of existence. The wind and dry conditions apparently result in a slow rate of decomposition, so bones and the hides of dead beasts linger. Once the scavengers have picked the carcass clean.

However the circle of life continues and it the season for giving birth with many newly born calves wobbling around on unsteady feet. For newborns they seem quite large, but I guess they need to be well able to begin their life of non-stop foraging almost straight away. It is also the mating season with the males chasing one another, necks outstretched, jumping, biting and generally showing off to impress the females and set up a seat of dominance. 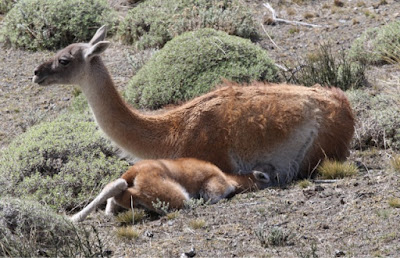 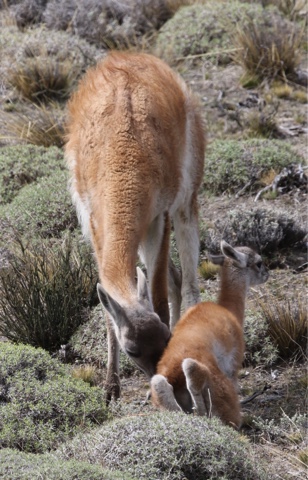 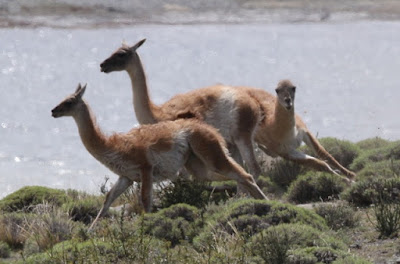 After a while we climbed onto a ridge which as well as affording a spectacular view of the massif, also contained ancient cave paintings made when these lands were inhabited by native Indian peoples. Knowing my desire to see a puma, our guide said I should continue on the trail and cross the sign that instructs people not to proceed further. Ummmm ok. So, there I was slowly edging along a path leading to a puma den when a pale sandy coloured form poked it's head out from behind a rock. Catching my heart as it leapt from my mouth and stuffing it back in my chest, I was mightily relieved to discover the beast was only a stray Guanaco that ambled on its way unaware that the human being watching it was glad he had a spare pair of trousers back at base. I beat a retreat. No puma for me and I reasoned 1. Surely the guide would not have put me in danger, and 2. The guanaco would not have been browsing within 3 miles of the scent of a big cat. But then this is South America where health & safety is not even a glint in a government's eye and of course guanacos are eaten by Pumas every day so can't be that clever. The chances of seeing a puma are virtually non-existent though unless you know exactly where they are and are prepared to stake it out for as long as it takes. But later our driver showed us some video he had captured on his mobile of a puma hunting in front of his van in broad daylight, making a kill right there and then. Right place, right time. 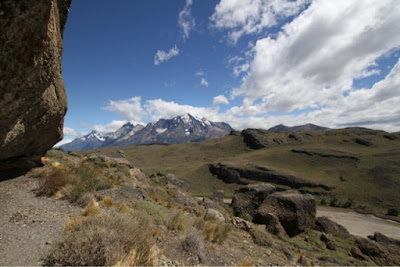 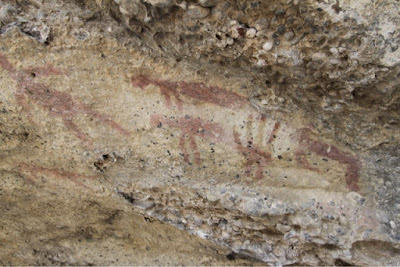 Our walk complete, we were being taken to our picnic spot when I happened to glance out the minibus window to notice three large brown forms standing beside a dead animal. It took me a couple of seconds to realise what I'd seen and a further few seconds of frantic gibbering to convey to the driver that we should stop and reverse 100 metres down the track. He did so and there just off the road we were able to scramble out and watch three young condors tucking into a dead guanaco. This was more like it. As we watched in awe the efficiency of these huge birds in cleaning up deceased animals, a total of four adult birds drifted slowly over our heads and inspected the scene. One landed and proceeded to assert its dominance, landing in the middle of the youngsters and quickly feasting on the prime flesh. A few squabbles added spice, the birds snapping at each other with bills slick with fresh blood, so I too snapped away to my hearts content. The results are not too clever, but believe me trying to hold a heavy camera and lens still in the teeth of a forceful gale, shooting into a heat haze, is really not easy. You can get a good feel for the scene though I hope. 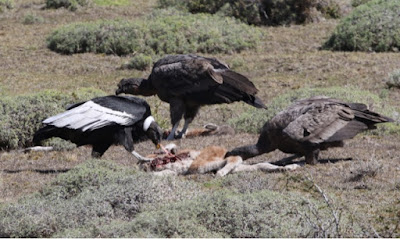 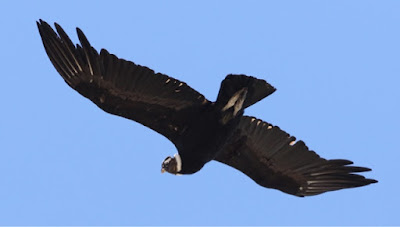 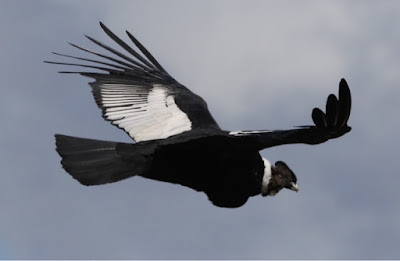 The remainder of the day was spent driving through the park admiring the impressive, ice capped, mountains and general scenery. We also saw some wildlife, notably a couple of harriers and some male rheas with their herd of chicks. One had 13 young to contend with and seemed to think walking them along the road was a good idea. 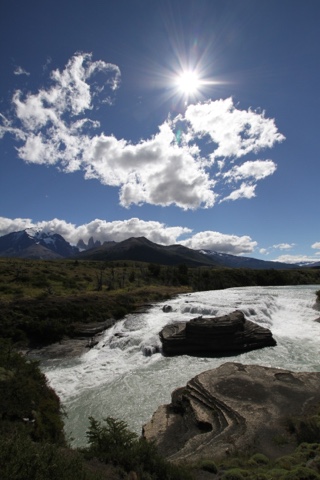 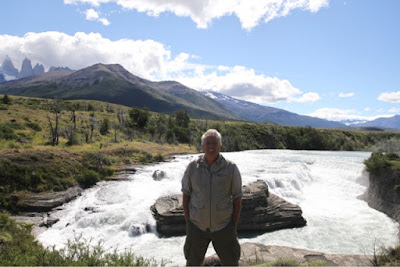 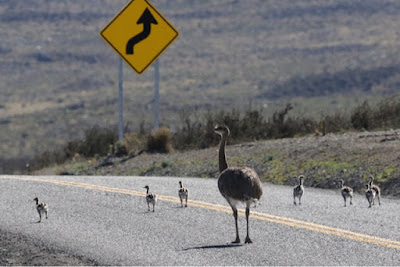 Tomorrow we move on yet again to visit Argentine Patagonia. Getting a little travel weary if truth be told, but I'm sure the long hours of driving will be worth it. I'll let you know in due course.