Sitting in a hide at Sculthorpe Moor I was taken with an uncontrollable fit of shivering. Numb with the bitter cold of a January morning in a damp woodland sprinkled with last night’s snow and without a breath of a breeze. My boots tapping on the wooden floor planks gave the great spotted woodpecker drumming on a nearby dead tree a run for his money. The reason for the endurance of such discomfort is simple; I’ve determined this year to see as many bird species as I can without resorting to haring around the county in search of rarities. I’ve made a mental list of 30 or so winter specialties that I aim to stumble upon before the end of March. It’s no big deal, just a bit of personal fun really, but the inestimable value is that it will get me out to places that I would otherwise neglect. In short it will simply get me off my backside and out. With this worthy aim in mind I thought Sculthorpe would be a good place to connect with a few winter finches and in this respect it didn’t disappoint. Bullfinches are regular here; it would actually be difficult not to spot one at the many feeding stations dotted around this excellent reserve. Bullfinch was pretty much the first bird I saw in fact. Bullfinch was the first bird that brought a smile. But not the only one for pecking around under this particular set of feeders was a rather splendid brambling, always a lovely bird to see and they are just beginning to dress up for spring. 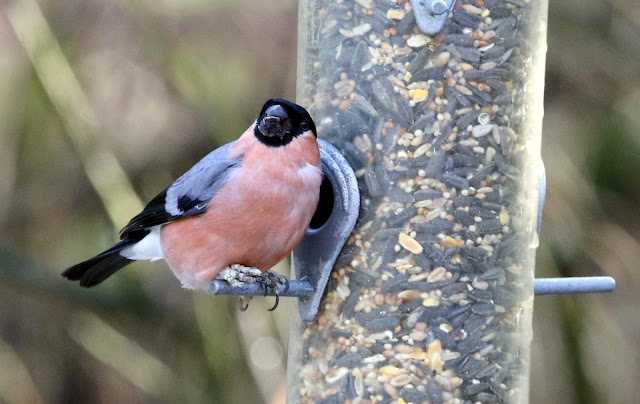 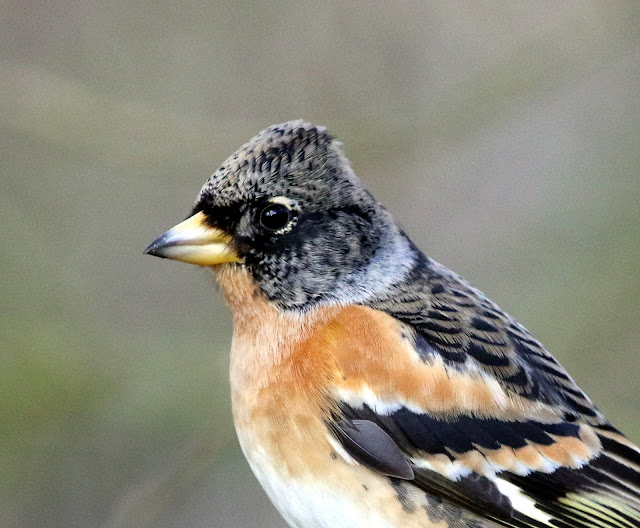 A gentle stroll along the frost encrusted, sun spangled boardwalk brought forth charming long tailed tits buzzing in the alders with a large party of siskins above. Nuthatches fluted, buzzards mewed, woodpeckers drummed whilst my toes gradually froze. Reaching the hide where the aforementioned fit of shaking took hold, I sat alone just me and the birds on this still and beautifully sunlit day. I thought I should start walking again before I pulled a muscle or the hide began to fall apart, but a small bird flew onto the feeders and arrested my attention. A redpoll. All my thoughts focused on this tiny little finch and amazingly the shaking stopped instantly. Redpolls would have that effect because you really need to concentrate in order to determine which species you’re dealing with. This particular specimen seemed quite small and brown with a buff coloured wing bar so was almost certainly a lesser redpoll. Not new for the year but lovely to see. After a couple of minutes another small finch joined it and instantly I could notice a difference. Frosty plumage, bigger, chunkier, longer wing projection, little tufts of feathers on the thigh area. Could it be a common (mealy) redpoll? I reckoned it was. A male coming into bright spring plumage. I find these birds so tricky but it’s on my list now despite some angst later when I consulted reference works. Go with your gut Baz and a few years under your belt. 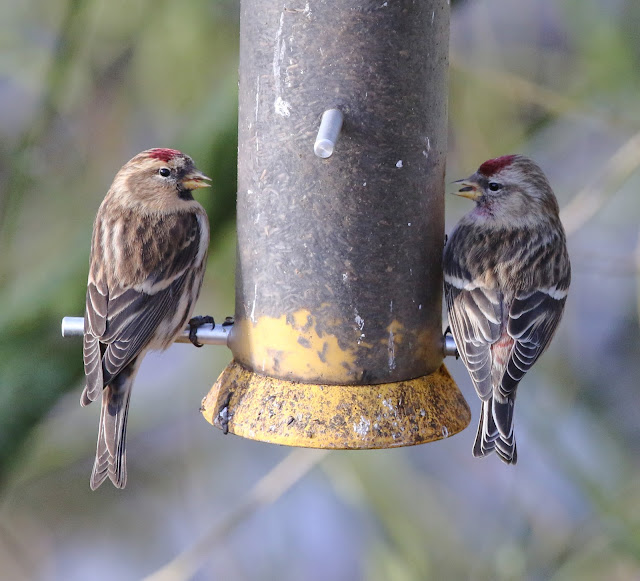 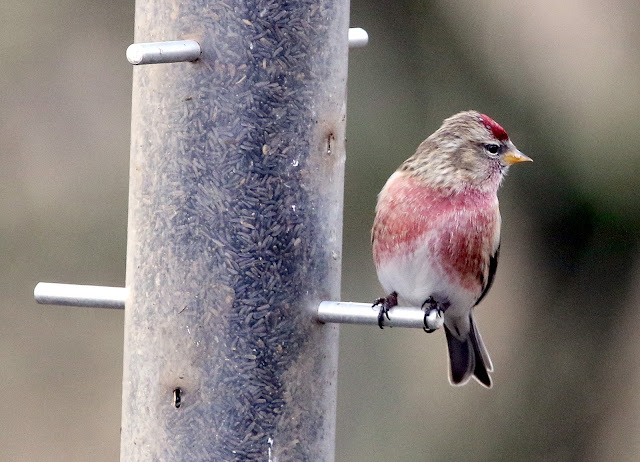 After leaving Sculthorpe and with some time to spare before having to get home I thought I would simply find a few north Norfolk country lanes to drive slowly along to see what I could find. I can’t tell you how much I enjoyed the following hour, meandering gently eastwards with barely a car passing by. Wildlife rewards were plenty; a pair of courting buzzards perched in a roadside tree, a kestrel peering down at me illuminated by the soft, warm light of a waning afternoon, a brown hare that darted across my path followed a few minutes later by a lovely barn owl that I followed for some distance as it buoyantly bounced above the roadside verge hoping to find a hapless rodent. And then the jewel in the crown, a red kite that circled above me for 5 minutes whilst I snapped away to my heart’s content. That was quite something with which to end the day. 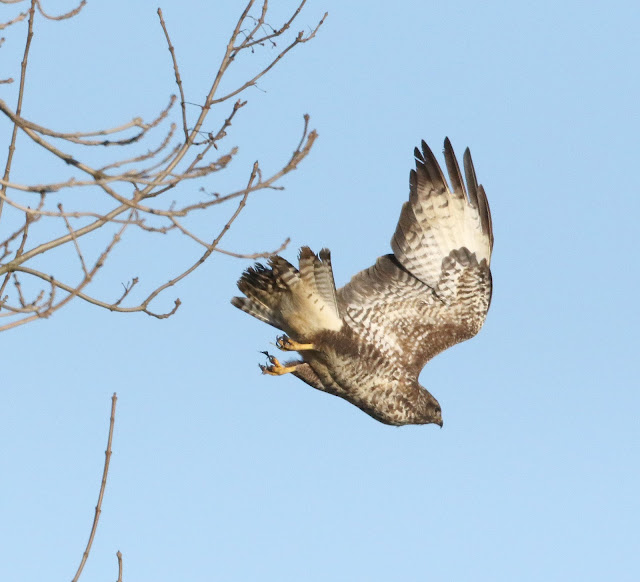 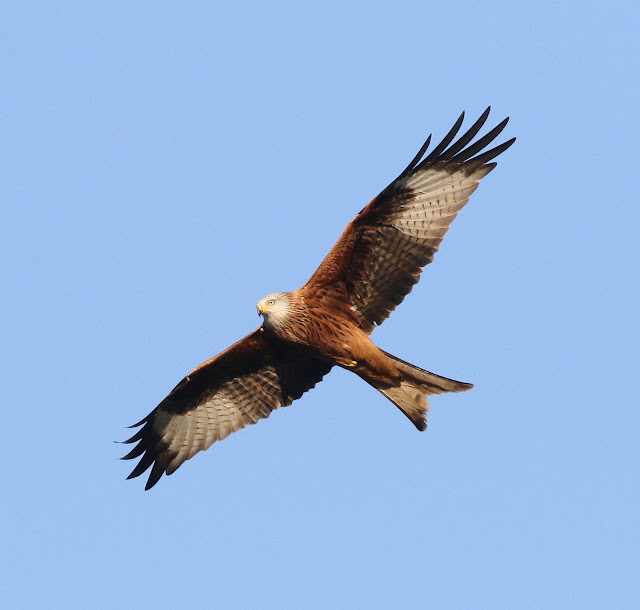 The following morning (31st) found most of Norfolk enshrouded in thick, freezing fog. What to do? Stay in and crawl up the wall or chance to the fact that the contrary coast would almost certainly be clear? Fortune favours the brave and the coast won the day. Good move, for on reaching Holt the skies cleared revealing a different world, bright blue skies and a piercingly bright sun. Nothing for it but to see if another couple of gaps in the list could be filled by walking the beach at Cley in search of the glaucous gull that has been hanging around for a couple of weeks. But first a flurry of delightful snow buntings probing for seeds amongst the shingle ridge, much wider now than it was when I worked here a few years ago. If it wasn’t for the labours of the USAF who sadly needed to salvage the helicopter that crashed here and bulldozed a parking area for their vehicles it wouldn’t now be possible to park your car at Coastguards. Coastguards what Coastguards? Indeed, that building and most other things here succumbed to the mighty force of the storm surge of 2013. It is truly a dynamic stretch of coast. There are positives; the increased area of shingle has created more nesting habitats for shorebirds and it was on this area adjacent to east Bank that the gull was feasting on the carcass of a seal. A bit gruesome to watch this light biscuit hued bird acting very much like a vulture of the African savannah, plunging its bill deep into the carcass to gorge on the rancid meat therein. The bloodied base to its beak told the tale. After a while it flew off to rest, wash and preen on a nearby pool. Flyover pintail was a bonus bird here. 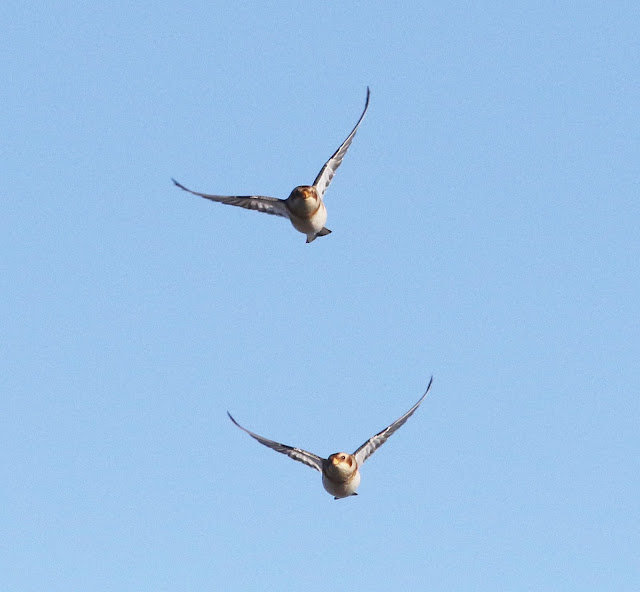 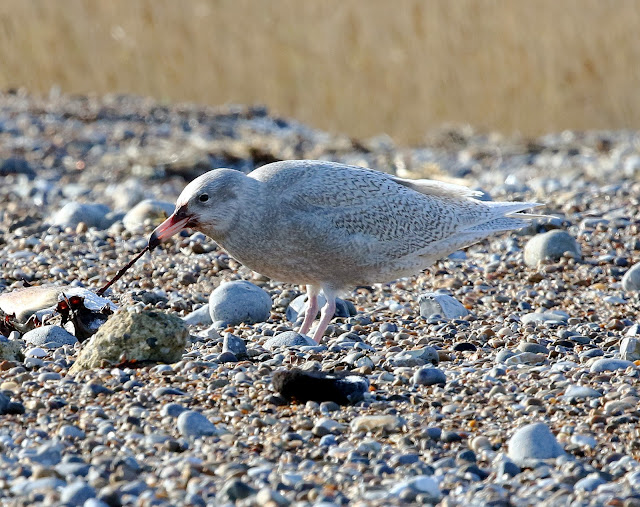 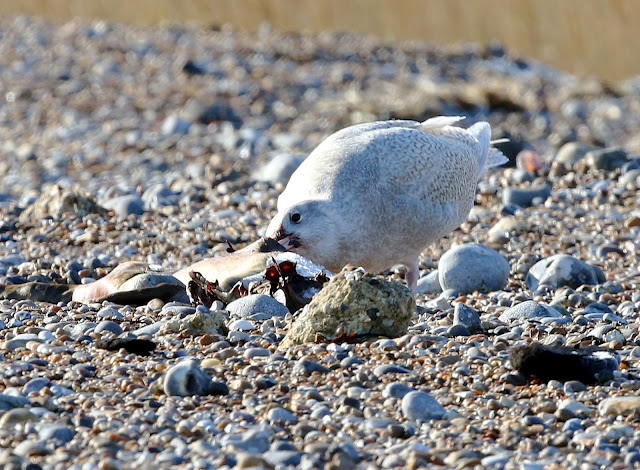 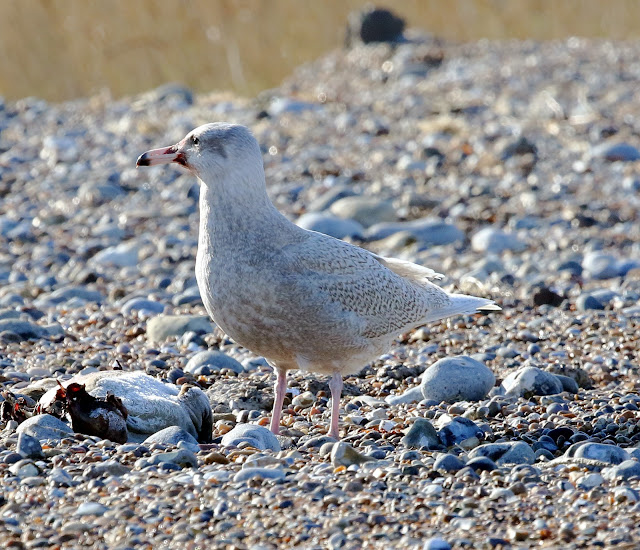 Next and final stop as it turned out was at Holkham. Out of the car, look up, another red kite. Looks like these majestic raptors have well and truly arrived. The main object of the visit to this rather wonderful spot was to try and catch up with a party of shorelarks in residence for the winter. They were there, probing quietly amongst the saltmarsh plants, keeping a low profile as ever they do. What truly anomalous larks though; sandy brown – so far so good – and then Bang! Bright yellow and black face masks. Superb! And good to see the reserve has roped off a section of the marsh so these increasingly scarce birds can enjoy a spell of peace and quiet. With rock pipit, common scoter and a sizeable flock of linnets also being ticked as the setting sun shone low and golden, it was time to trudge back to the car and drive inland to be enshrouded once more in the thick, freezing tendrils of the January gloom.