on February 18, 2019
On this February day we are spoiled by a cloudless sky between dawn and dusk; a sky so pure and blue you feel you can reach out and touch it, running your fingers across its smooth, unbroken vastness; not a puff of condensed vapour to besmirch its clarity. And consequently the sun beat down, warming our heads and our hearts, giving a flirtatious promise of good things ahead. ‘Come play’ she said, ‘Close your eyes and drink in my warmth. Today you must do so, for tomorrow....who knows?’ And as one snapped out of a dream we awaken from winter’s bitter bite, shrug off its numbing grasp, shake ourselves down to realise life is about to burst forth all around. We’ve made it! Stumbled half blind through another fallow season, ready to emerge into one full of joyous energy and rebirth. And today was kind to us. Today made us realise that only by enduring months of cold, wet, dark and grey can we really appreciate warmth, dry, light, and colour. Come with me on a short journey, it won’t take up too much of your time …


Despite the city being graced with crystal clear air, there’s a mist over the marshes; the flatlands of eastern Norfolk that were covered in ancient times by the brooding North Sea. Parts of this area rest below today’s sea level and are ever threatened with flooding from storm surges and spring tides. We’re standing by a gate overlooking a field of rough grass and sedge, a field shrouded in a white veil through which we can dimly make out the ethereal shapes of water deer, dog like in form and very much at home here. Count them - two, four, six, eight - already paired and feasting on the sedges of the damp meadows. Our friend the sun is winning the battle with the curtain of water vapour, burning it off by degrees to reveal more of the panorama. Where a short time ago there was a sheet of haze, there now appears the vague outlines of drainage mills, a clump of stunted trees, lines of fence posts, distant houses, a flint built church and the bare masts of sailing dinghies moored up for the winter. In these lands of sweeping vistas and wide open skies, small inconsequential things take on new meaning. The mills become statuesque; isolated trees and hedges coveted highways, shelter and nest sites; gates and fences assume the role of song post, resting spots, gathering points and lookout. In the still, peaceful air the slightest sound travels a great distance. A barking dog from the village over a mile distant, the faint whistle of a train on tracks laid at least double that distance, and all around the joyous songs of skylarks rising upwards to greet the revealed flawless blue dome of late winter. 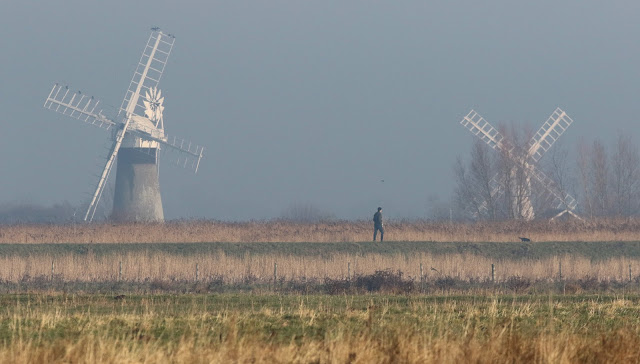 9.30am. Why are we standing here you may wonder, why this particular spot?  Rumour has it that this field of rough grasses is a favoured hunting area for short-eared owls: golden plumaged hunters of wide open spaces. They vacate their summer homes of northern moorland to seek sanctuary in this somewhat milder wilderness where they plunder the high density of rodents to sate their appetites. It’s a waiting game, but with luck we may see one. We tarry for an hour, the mist is finally swept away, the temperature rises but still no owl. Two ladies, fellow bird and photography enthusiasts, good company, decide to wander along to the next field to see if they can spot anything. Before long they return to tell us that they have indeed spotted a roosting owl, not 100yards from where we stand. And there it is sitting motionless amidst a clump of sedge grass, cryptic colouration making it all but invisible to the naked eye. With the aid of optics it is possible to see the bird twisting its head this way and that, alert to every sound and movement. After perhaps 30 minutes it shuffles away out of sight, seemingly reluctant to treat us to any form of aerial display. We have to get going, and reluctantly retrace our steps, resolving to return later in the day to see if our luck will change. 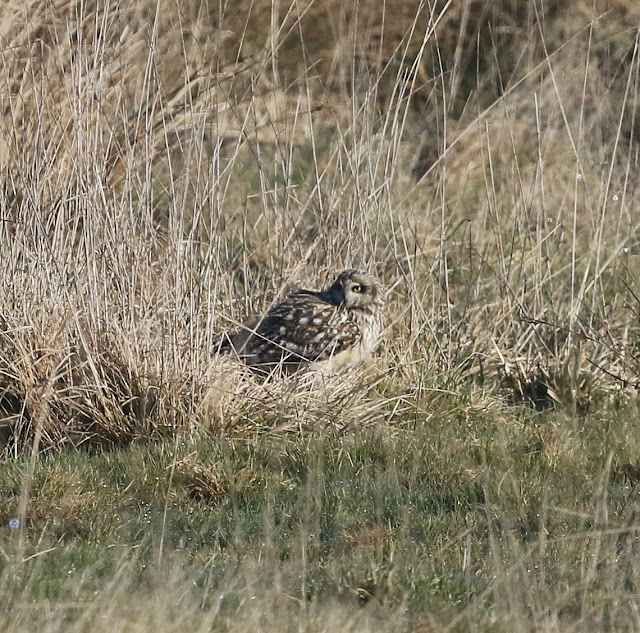 3pm: the sun has curved round in its low arc to shine from directly behind us, illuminating the field with a soft golden light. The waiting cast has changed, the ladies from this morning replaced by two chaps that we have seen before but can’t place. We chat, introductions are made and all becomes clear: one is a regular visitor to Strumpshaw and the peregrine watch point; the other a man met just the once over 40 years ago, but somehow the memory stuck. It’s good to share the appreciation of this place with others of like mind. The owls were flying earlier but have now disappeared. No matter, there is always something else to see and admire. A casual scan of the marshes shows a buzzard sitting patiently atop a gatepost, and a short distance away a sparrowhawk doing the same. A marsh Harrier lazily hunts over the reeds and as we track its progress there beneath it is surely something different? Yes, there’s no doubt it’s an owl, a short-earned owl beating its way along the far distant river wall, frustratingly heading away from us and soon lost to view. Nothing for it but to wait patiently and chat about birds and cameras, cameras and birds; tales of successes and laments for the one that got away. Any avian movement attracts attention and another buzzard appears making a direct line to the one idling on the fence. A brief tussle ensues and whilst snapping those antagonists an owl apparently flies into our field and drops down out of sight. Now our waiting has a stronger purpose for we know the birds are near at hand and must surely hunt soon now the light is slowly fading. 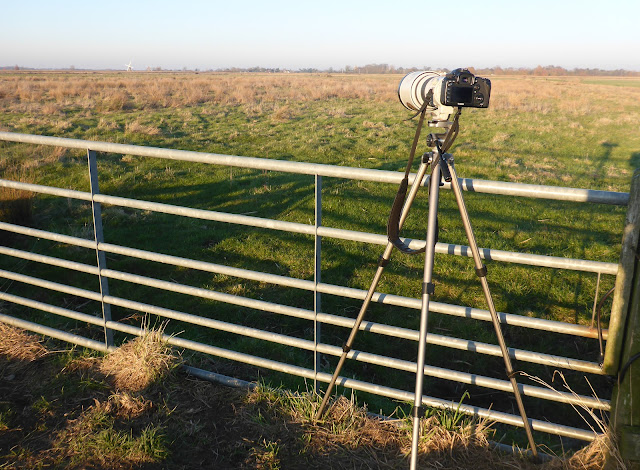 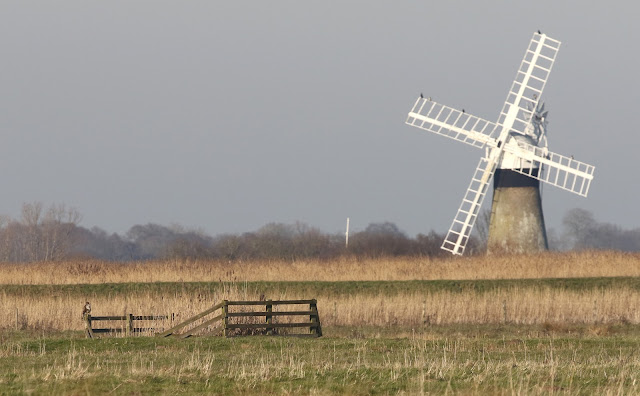 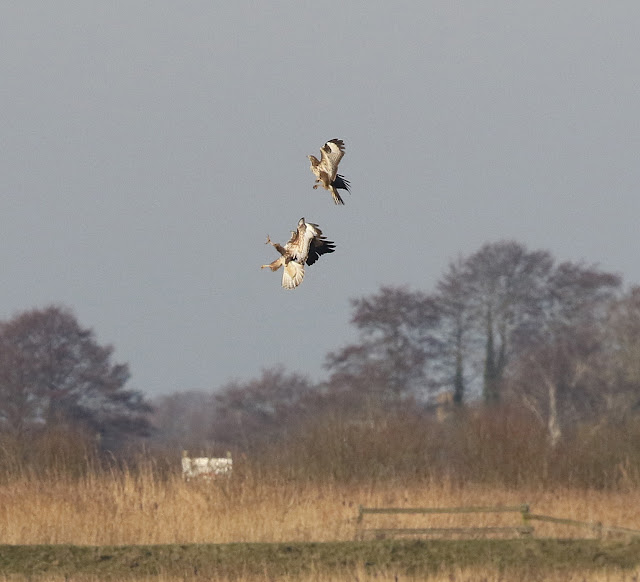 The sun wanes, our shadows lengthen. Lines of cormorants snake across the sky, coming from a days fishing in coastal waters and heading for their roost at nearby Ranworth. Hundreds stream overhead, their numbers making dotted letters in the blue. It is getting late and one of our party decides to leave. He retreats ten paces when the owl gets up. Call him back and we watch and snap away at this gorgeous bird as it sweeps to and fro over the meadow before purposefully winging its way out of our sight. A lovely moment, but there was more to come. A second owl flies up from cover and this one spends more time beating a path around the edge of the field, hovering periodically before plunging into the grass after some unseen prey. It doesn’t seem to catch anything and it too eventually retires to seek more profitable hunting grounds. The few minutes of action caught on camera, impressed in the memory, worth every idle second spent scanning the marsh. 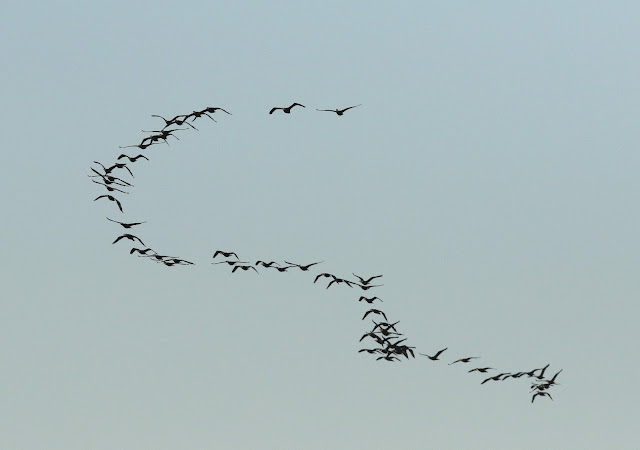 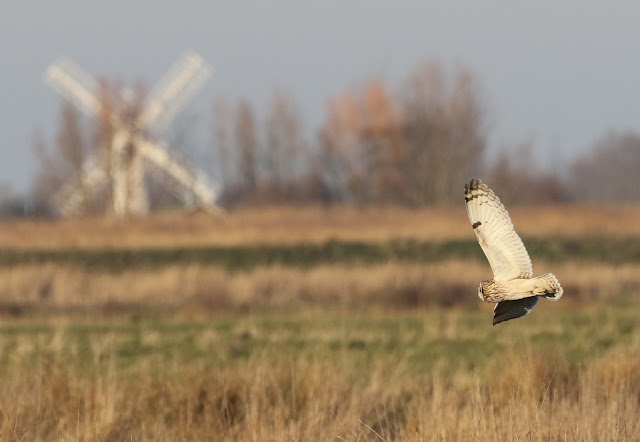 It’s now past 4pm and we’re alone. The buzzard flies towards the distant woodland there to roost, trailing a mobbing crow and common gull in its wake. The sun is beginning to set, a slight chill stings the air. And there in the deep honey coloured light the owls return, a pair of them chancing their luck once more with their favoured hunting patch. They don’t come as close as we hope, but the sight of them flying directly towards us with glaring bright yellow eyes will remain etched in our memory. Every detail of their spangled plumage displayed to perfection in the late afternoon light. We watch until it is really too dark to see clearly before making our contented way back to the village with a decided spring in our step. Worth it wouldn’t you say? 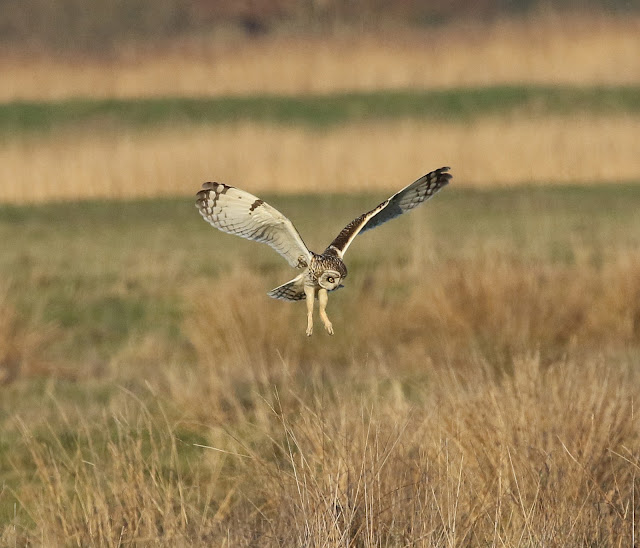 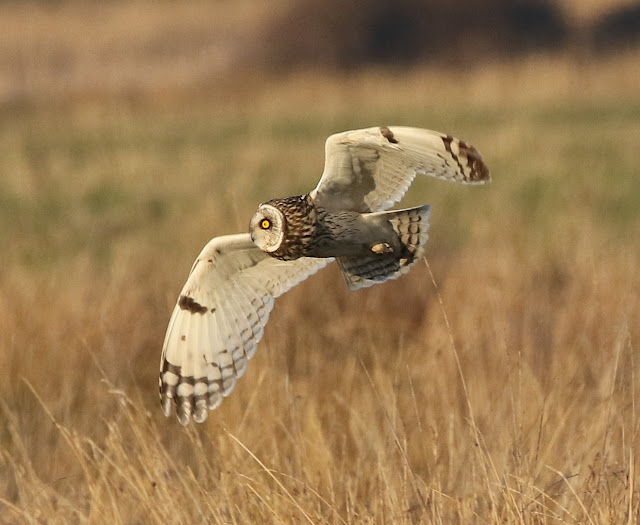 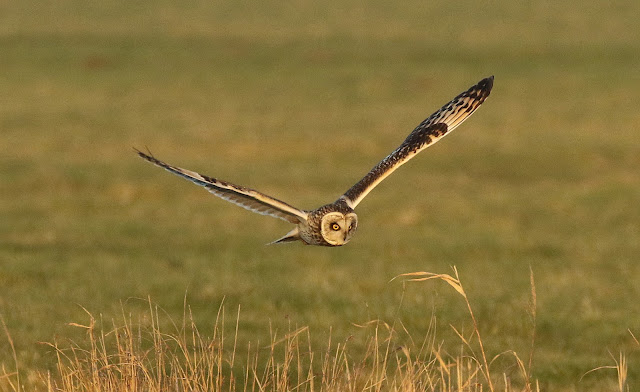 We leave the marshes to the owls and the deer, the hares and the geese. The mist will form overnight to present another eerily veiled dawn, but for now we pause only to admire the sinking red orb reflected in the waters of this magical wetland. 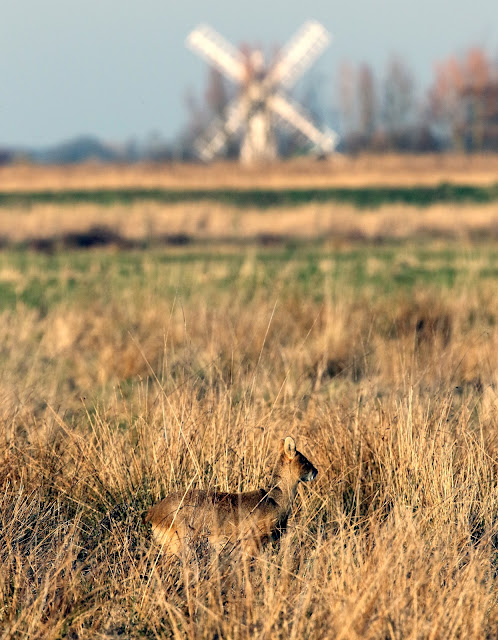 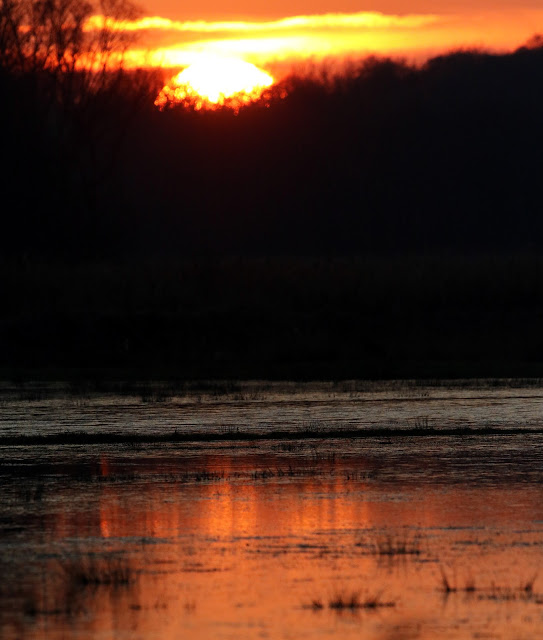