It may only be February, but in the bird world the urge to set up territory and foster a new generation is already strong. Between serving happy customers intent on making the most of another unseasonably mild and sunny day, I spent my shift at RSPB Strumpshaw Fen watching the various water birds on the Broad go about their business of staking a claim to a slice of this wetland oasis.


Grey lag geese were present in good numbers and already paired ready to breed. Most were content to idle about, but some were keen to exert their dominance over any of their kind that ventured too close. The gander would then approach the trespassers with neck stretched out and held low, honking away for all his worth. Both on the water and on the land the threatening performance was enacted mostly without issue, however on a few occasions birds would decide to square up and have a tussle and then the feathers would fly and the water would broil. 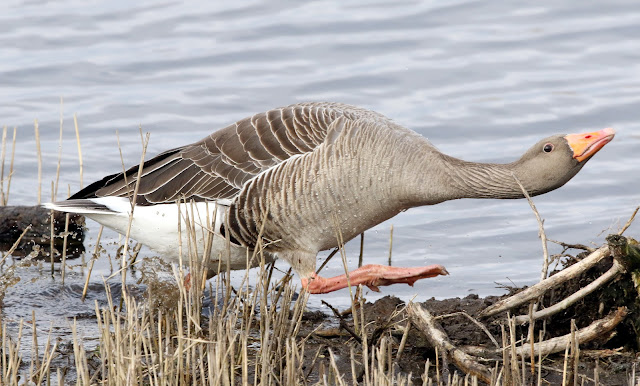 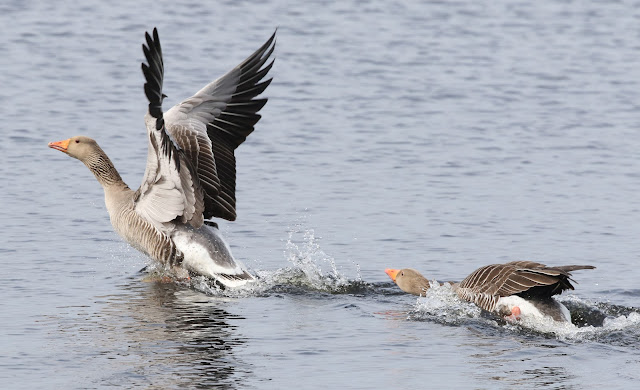 Shoveler too were engaged in a spell of ‘You looking at my bird?’ kind of aggression. Again it was just the drakes that blustered and bluffed their way around the shallows. The females just sat there and watched, talking about nest building and how last year’s ducklings were getting along. They let the men fight it out, shrugged once the skirmish was over and flew off with their mate; victor or otherwise it didn’t seem to matter much. Gadwall joined in the act with drake birds doing their best to give their antagonist a good ducking (sorry). Shelduck do tend to get a touch more feisty with the drakes having a pretty good set too (saw a pair tussling at Tower Hide last week), but all things considered these were relatively tame affairs compared to the real fighting engaged in by the coots. 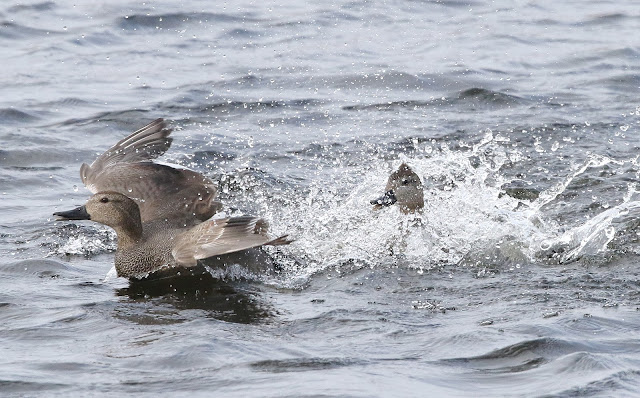 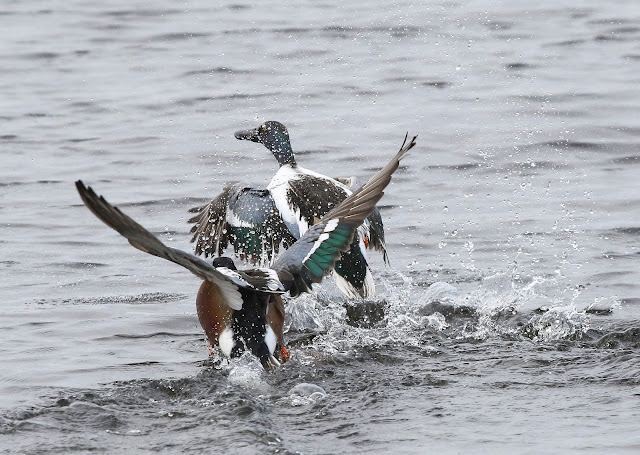 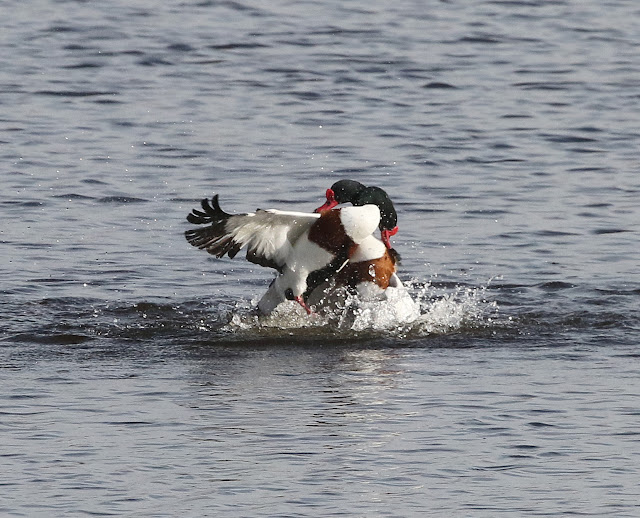 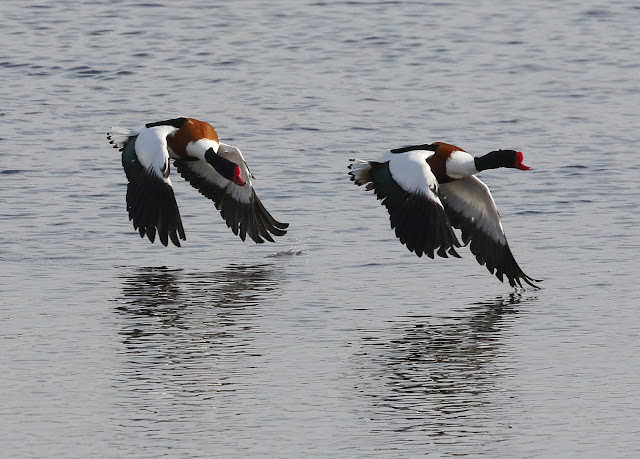 Yes, the coots were the ones that meant business. Their temperament at this season is akin to an ardent football fan that has just seen his team get a right stuffing ‘Look at me again mate and I’ll have you’ they seem to say. Just outside Reception two pairs of these black balls of fury were periodically disputing the boundary of this year’s breeding zone. A line across the water had been delineated, one that was naturally invisible to me but meant everything to these touchy creatures. Whereas the other water birds would leave the sparring to the men folk, in the world of the coot there is no sexual preferences. Here we have true equality with all partners ready and able to wade in. I watched one bully, possibly male, possibly a member of the fairer (?) sex, take exception to a pair of moorhens and a poor gadwall that in its opinion ventured too close. It would shoot towards this perceived enemy creating an impressive bow wave as it frantically attempted to maim the intruder. Threatened with this undeserved burst of anger, the poor victim would scuttle or fly away in alarm. Being sorted out by one of your own species is one thing, but a coot? Really! 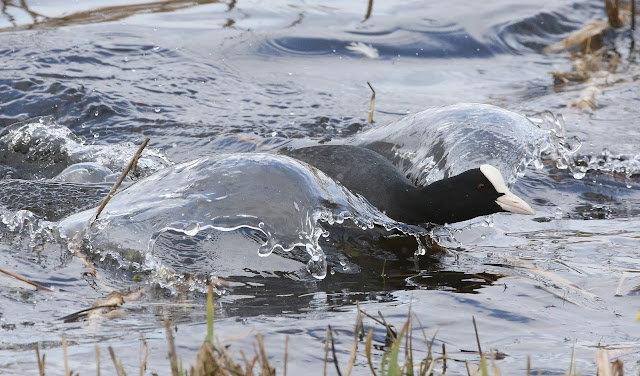 But they reserve their deepest vitriol for members of their own kind. Pairs would face each other beak to beak, wings raised much in the manner of an annoyed swan. They would tentatively prod forward attempting to push the boundary, but such cheek was always met with a determined rebuff. A lot of the time these disputes would end peacefully with one pair turning their puffed up backs to the other pair and swimming back to their side of the broad, but sometimes something happened to cause a fight to break out. Watch out, this could get nasty! With the naked eye all that could really be seen was a violent splashing and flurry of feet and wings. With the aid of a camera with a fast shutter speed the true nature of these bouts can be appreciated. The birds really do get down to some serious rucking, either trying to drown the other or rake him/her with some fearsome claws. And the hen birds get stuck in too, coming to the aid of their partners and whacking the intruder with the avian equivalent of a rolling pin. It makes for dynamic viewing with some of the contortions of the individuals quite startling. Amazingly there seem to be few injuries, even when up to eight birds become involved in a mass brawl. It will all settle down once these initial bouts are over. The birds will build a nest in a territory they consider suitable and large enough to provide for their offspring. But for now in this perhaps false spring, it doesn’t half provide some good entertainment. 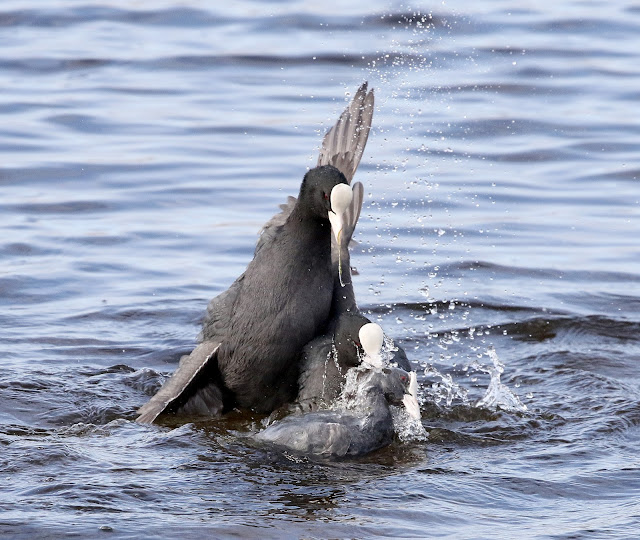 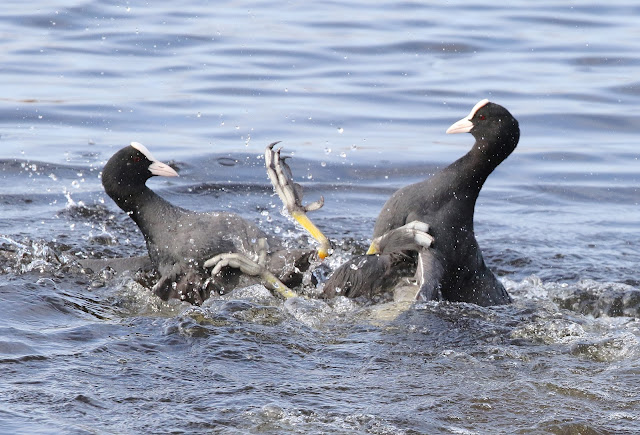 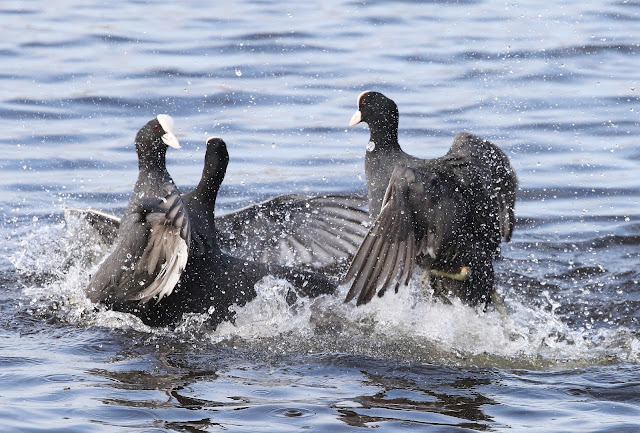