Cock of the Rock

on May 19, 2016
After yesterday's inclement episode we thought we had seen the worst of what a Northern spring could throw our way. We were wrong. Today dawned grey and cold with a viciously biting wind and it simply got worse. Our drive to another section of the burnt forest to try again for the three toed woodpecker was made through wet snow, hail and driving rain: hardly what you would expect in mid-May. In these situations however the gallows humour tends to kick in, so with a stiff upper lip we staunchly faced the worst the weather could sling our way. Being able to retreat to a warm minibus helped. 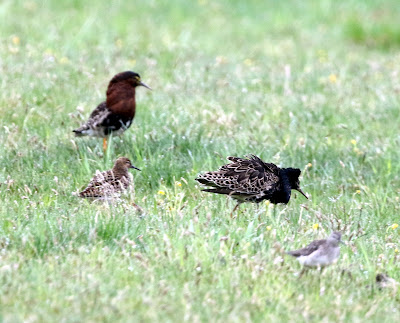 For the day we had the services of another local birder who had intimate knowledge of the various woodpeckers and owls inhabiting the region. With the aid of a lure, broadcasting the sound of a drumming male, we were soon able to enjoy the brief sight of our target bird shuffling up the trunk of a dead pine. Great stuff and a life bird for me. 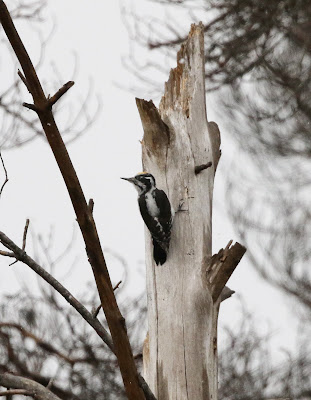 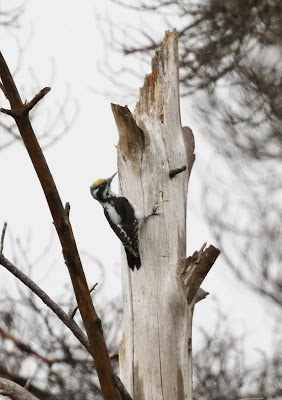 Onwards then to a day spent driving between various watch points in the deep green forest attempting to find other shy inhabitants of this verdant landscape. First up was a beautiful black-throated diver that cautiously cruised across the mirror calm surface of one of many lakes that dot the landscape, breaking up the serial ranks of pine. Seen through a telescope, the summer finery of this bird was a delight; a smooth grey head giving way to a jet black throat bordered by a zebra patterned collar chevroned into a white breast broken by delicate vertical black striping. So different to the odd winter plumaged individual we see back home. 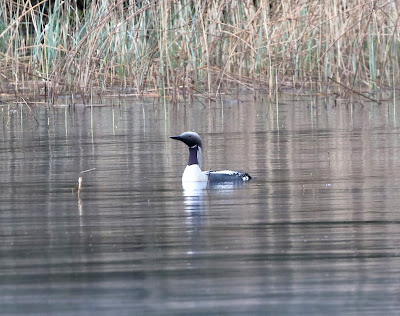 Next we managed to persuade a pair of black woodpeckers to loop around us for a few minutes giving good views of their distinctive angular shape. As one of the birds swooped overhead I fired off a few shots against the lowering cloud. Most only caught part of the bird, but one captured the whole thing in silhouette which doesn't really matter when the subject is pure black anyway. Once again the Madden adage of blasting away hoping that at least one image brings the goods came up trumps. When the birds briefly perched, frantically trying to locate what they thought was an intruder, it was always obscured by the branches of nearer trees rendering photography impossible. Lovely birds these, but not wishing to disturb this breeding pair unduly, we retreated in search of one of its smaller brethren. 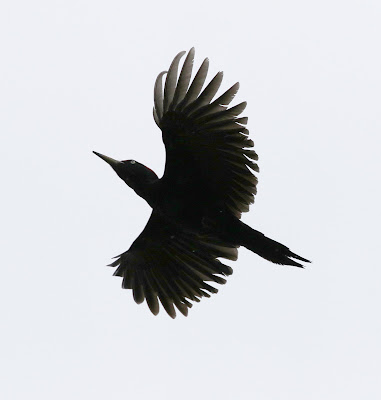 Is luring birds by the use of taped calls ethical? Is it real birding? I'm not sure about this, although the only way we could ever have hoped to spot any of the species on today's agenda would be by employing that method. Of course whether a bunch of British birders sees them or not is of no consequence whatever, except in the sense that we had paid for this very service. What is important is that 1. The birds are not disturbed or harmed unnecessarily; and 2. Something positive is transferred by way of education, wider appreciation of the local conservation issues and some investment into local conservation efforts. Happily bird tours undertaken with responsible operators fulfils these criteria I think because it would not be in the interests of the company/leaders to kill the goose laying the golden egg, I.e if the birds decide to move away there is nothing to attract visitors. Also being able to spend several days speaking with local environmentalists enables us paying punters to discuss all kinds of issues and exchange all sorts of ideas gleaned from our experiences in the UK and further afield. Maybe the fact you're reading this blog makes you more aware, albeit in a very limited way, of some of the happenstances affecting Sweden's wildlife. Maybe you will decide to find out more, maybe you will even visit. Certainly the fact that part of the cost of these tours goes towards paying local guides, ringers, hoteliers, transport companies etc helps to keep those things thriving, and surely that is what really matters.

Anyway, the next gem to be fooled into doing battle with an imaginary interloper was a rather lovely grey-headed woodpecker. This bird stayed in view for some time perched in a tree (out of camera range) enabling everyone to obtain satisfying scope views. Lifer No 3 for the day. Could it get better? 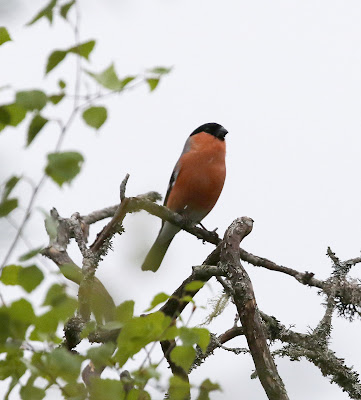 Oh yes. After several abortive stops for Pygmy owl, intermissions that although devoid of owls did bring in a surprising number of other birds to mob the suspected predator, we walked a short way through the forest to see if we could find a capercaillie. Now this bird is towards the top of my 'must see' list but we didn't hold out much hope of locating one amongst the thick ranks of lichen encrusted tree trunks. We scrambled for a little way over boulders and fallen branches covered in a deep cushion of moss before arriving at what can best be described as a mini arena. And there proudly strutting to and fro atop a large mound of rock was the most magnificent bird I have had the pleasure of watching. The sheer size of this bird bowled me over and the fact we were able to get so close and observe it performing at its lek was sheer magic. This cock of the rock marched around emitting various high pitched clucks and clicks holding its head high and fanning its enormous tail peacock fashion. An impressive sight for any female bird that happened by. It seems though that it is unlikely any hen birds are unmated at this late stage and so the efforts of this testosterone enthused individual will go unremarked until his urge to mate subsides and he resumes his lone life in the deep forest. But for this bunch of cold, wind blasted Brits being able to encounter such a creature in its natural environs going about its intimate ritual was worth every numb finger, worth every damp layer of clothing, worth every penny paid. It was simply priceless. 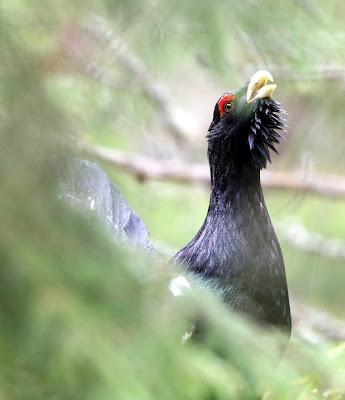 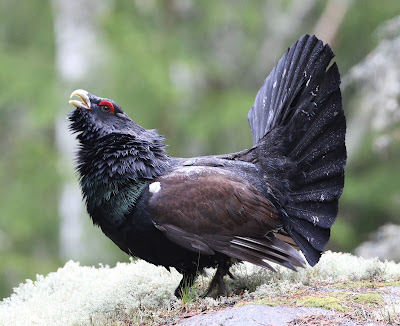 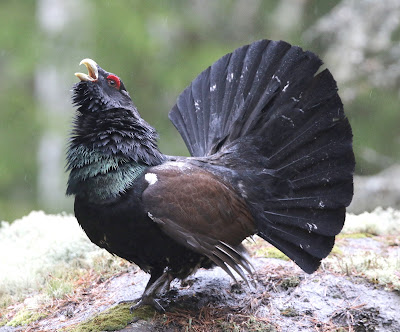 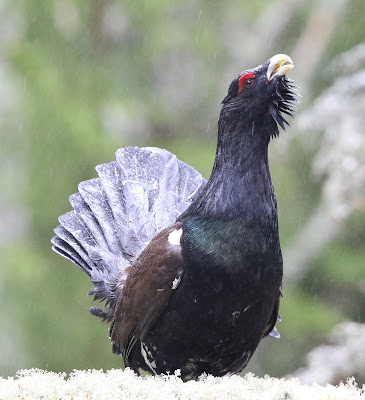