Enveloped by the gentle calm at the gloaming of a warm May day we waited at the edge of a damp meadow bordered all around by thick sentinel forest; a group of expectant birders, hushed and vigilant. And as the shadows of the tall pines crept slowly across the sward, one of our company caught a glimpse of something distant fly slowly across his field of vision. Something large: something special. Fifteen pairs of binoculars scanned towards the far end of the open space in the direction of his pointing finger, but there was nothing now to be seen. 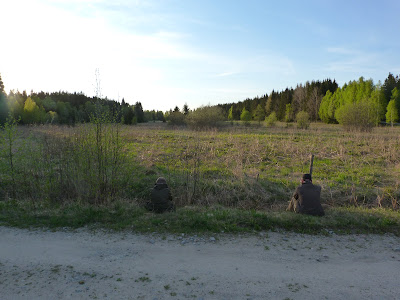 We moved along a track a few hundred metres, flanked all the way by towering pine and spruce, to recommence our watch from a more advantageous viewpoint. And there, after a short wait, the most beautiful of creatures drifted into view to perch atop a tree stump; a great grey owl, the bird we had been promised and the one atop everyone's most wanted list. What a magnificent bird it was too with its outsize facial disc housing piercing pale yellow eyes framed by question mark shaped white feathering, powerful body cloaked in subtlety graded grey and strong, lethal talons. There was something altogether grandiose in the way the bird sat proud and still, turning its large head slowly this way and that looking and listening for voles scrabbling through the lush grasses. What a privilege to witness such a rare and impressive sight.

It had been a long tiring day though, a day that began with a drive during the dark hours to Heathrow to catch an early morning flight to Stockholm. We arranged this particular trip with Naturetrek and once safely in Sweden we were picked up by our locally based tour leader Daniel Green and were straight into birding at a wetland site not far from Arlanda airport. Here we encountered many excellent birds including hobby, osprey, tree sparrow, and several sprightly yellow wagtails of the blue headed race flava. Newly arrived swallows twittered pleasantly on overhead wires, rather lovely plumaged jackdaws of the northern race soemmerringii poked around in dried cow pats whilst a thrush nightingale serenaded us from nearby scrub. Gentle, natural reminders that although we were only 2 hours from the UK we were most certainly in a very different ecological zone. Several species unobtrusively probed in the muddy transition zone between open water and reed bed, amongst them small numbers of jet black spotted redshank, surely one of the most striking of summer plumaged waders. And of course this was one of the reasons we had chosen to visit, to catch sight of migrating birds resplendent in their spring finery. To cap it all, a majestic pair of white-tailed Eagles soared lazily over the distant forest. This trip looked like it was going to be good.

Suitably enmeshed into Scandanavian style birding, we were informed that a real treat in the form of a black-winged pratincole had somehow meandered to another wetland within striking distance. Did we want to go and see it? Well as it turns out yes we did! We didn't have to work very hard for this lost exotic, for as soon as we disgorged from the minibus its streamlined form appeared, twisting gracefully this way and that as it hawked insects above our heads. A life bird for many and we had only been in the country a couple of hours. At this locality many wood sandpipers and ruff were present as were a few whooper swans, winter visitors to most of the UK, but common breeders here in the Black River Valley area of lowland Sweden. With the evocative bugling calls of cranes echoing around the marsh we boarded our wheeled transport and drove the few miles to our hotel.


After a brief settling in and a tasty dinner we embarked on a late evening session thanks to the long hours of daylight available in these northern latitudes. And hence we come to the encounter with the owl, the grey ghost of the boreal forest. We were able to watch this bird for several minutes; posed ever watchful for movement in the grass below. When it leisurely flew from perch to perch it seemed to do so in slow motion, its huge wings carrying it assuredly in total silence. And then it was gone drifting away between the trees to pastures new. Superb. With the light finally fading and the sky turning shades of pink and amber we watched roding woodcock perform their erratic territorial flights, clucking and clicking as they went. On the drive home a short-eared owl flew for some time in front of us hunting mammals in the grassy field margins, a bird no doubt migrating further north, there to breed on the Arctic tundra. A fitting finale to our day. 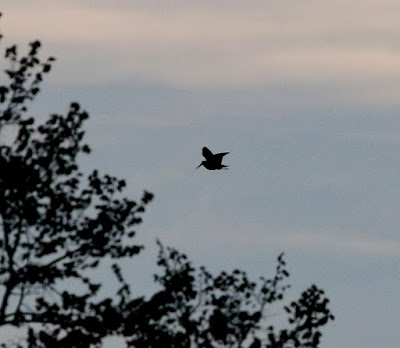 The show over we drove back to the hotel where I was asleep as soon as my head touched the pillow.