Our last day in the central lowlands of Sweden and a welcome improvement in the weather, allowing us to enjoy a prolonged session at a large reed fringed lake without the need for multiple layers of clothing (one of our group confessed to being cloaked in seven layers yesterday). From a raised vantage point sheltered by farm building and stands of trees, we could scope the freshwater expanse at leisure; numerous pairs of eager eyes scrutinising any flying object meant not much got by us.

Almost the first bird we encountered was a red kite that cruised by at roof top level allowing impressive views of what is apparently a rare sighting in this part of the country. Good start. Hot on the heels of the kite an immature peregrine made an appearance scattering the gulls and waders into a frenzy. This bird loitered around the northern end of the lake for some time periodically stooping at groups of wildfowl or flocks of multi-coloured ruff, which although not especially pleasing for the hapless targets, did allow us to get a good idea of what birds were hiding away behind the amply vegetated small islands. Thanks to the over enthusiastic falcon we were able to add several species to the day list that may otherwise have remained absent: gorgeously  black spotted redshank, a sprinkling of Temmincks stints, garganey, and several dainty wood sandpipers. Most of these birds are held up here because of the strong northerlies of the past few days hampering their sprint further north. 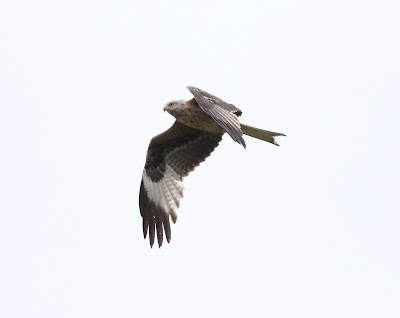 If the peregrine caused havoc, imagine what something several times its size would do. The appearance of an immature white-tailed eagle threw the whole lake into chaos with its passage being tracked by chevrons of outraged black-headed gulls, hooded crows and a pair of marsh harriers. The distant image I captured of the male marsh harrier mobbing this massive marauder shows the differential in size quite well. The eagle caught a good sized bream from the lake and flew to a distant muddy margin to rip its prey to shreds. I remember the first white-tailed eagle I saw in Norfolk during the early 1990s. On that Saturday I was looking after my young son and pushed him in his buggy along the narrow puddle strewn tracks around Hickling Broad hoping to catch sight of the elusive beast. Alone and in the cooling dusk of a crisp February afternoon, we found the bird perched in a tree on a woodland edge. It looked like this brooding hulk was being mobbed by a small flock of sparrows, but in fact they were crows. It is a frighteningly big bird. 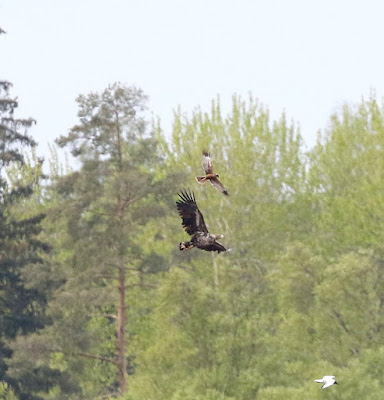 Sated by these wonderful sights, we moved on to another lake which unfortunately didn't have the protection afforded at the first. Here, exposed on the elevated ridge, the cruel wind whipped across the open water and lashed into us without mercy. A wooden hut used by a local nature group provided welcome shelter within which to consume our lunch, but it was not a pleasant session. However a common crane came close enough for a nice look and in the wooded fringe a marvellous pied flycatcher hopped from perch to perch belting out his joyous spring song. Bird of the day for me. 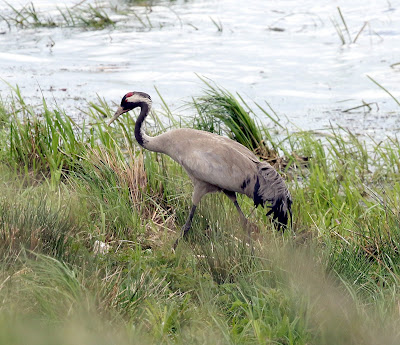 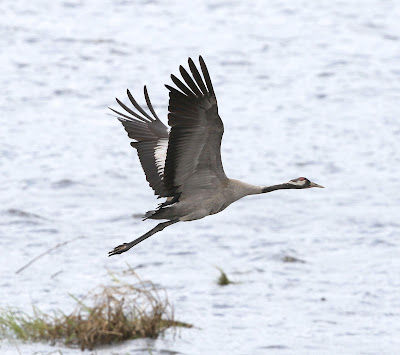 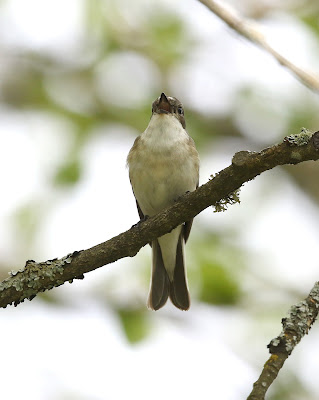 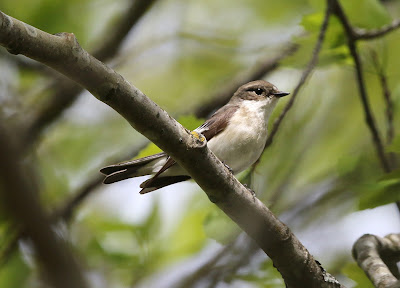 Later, en route to the airport, we stopped at a quarry area in search of the increasingly elusive ortolan bunting. It's not just the UK that has suffered catastrophic declines in songbird numbers, for despite most of the area we saw over our four days being quaintly rustic with red painted farm buildings dotted around, modern farming methods have contributed to a 90% decline in populations of some species: the ortolans being one such. But thanks to the expertise of our guides we had the bird jinking around us within a couple of minutes of our stumbling from the minibus. What a lovely bird this is and such a shame it has suffered big losses, declines not helped by ignorant and uncaring Mediterranean inhabitants regarding them as some sort of delicacy. Many perish during their spring migration caught in nets or on lime sticks and despatched by rough thumbs and fingers crushing their fragile skulls. Human beings: the scourge of the earth. 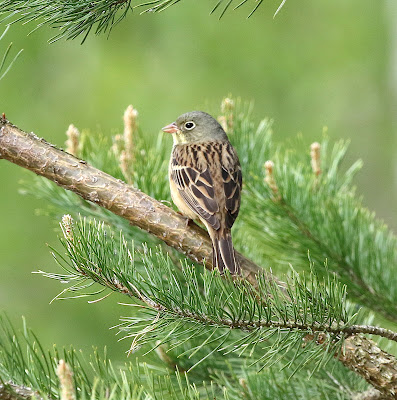 After, a large beer at Arlanda was most welcome and as with all of these trips much pleasant banter ensued. There are always friendly and interesting people on these trips which is one aspect making them so enjoyable. But as ships that pass in the night, each goes their separate ways once the aircraft has landed and tired bodies dragged through the airport to face a long trip to our respective homes. Who knows though, we may meet again on some other foreign jaunt. If it is half as enjoyable as our 4 days in Sweden we are in for a treat.