A fire raged through a vast area of the forest here in Vȁstmanland in 2014 causing immeasurable damage both ecological and financial. Strong summer winds whipped the blaze to an inferno which raged for weeks before it was eventually brought under control thanks to water carrying aircraft dragooned from France and Spain. Once the smoke had cleared and the devastation assessed (incredibly only one person lost their life), it was decided to designate a large proportion of the affected area as an eco-park and to let nature heal the wounds and green over the scars. Some two years on, the scene is still one of ranks of charred and blackened tree stumps, their singed roots wrapped around moss stripped boulders like a witch’s scrawny grip on the arm of her chair. Nothing has or will be done to clear the debris except to clear fallen trees from paths and roads; natural regeneration will be studied and valuable information gleaned from what transpires over coming decades.


We visited the area today not only to exercise curiosity, but also to reap the silver lining from the cloud. It seems that the dead trees play host to large numbers of beetle larva that in turn prove irresistible to woodpeckers, notably the three toed woodpecker that has moved in and is thriving amongst the ruins.


It was a chilly and wet day though, at total odds with the previous 24 hours. Where yesterday the forest floor and wayside were carpeted with the white blooms of countless wood anemones, today those dainty flowers remained curled up; reluctant to expose themselves to the unseasonal chill. Maybe it was the inclement conditions, or maybe just bad luck, but try as we would with eyes, ears and thought no woodpeckers were forthcoming. But it didn't matter because the experience of being in such a superficially barren landscape was reward in itself. And I say superficial deliberately, because despite all life is returning, indeed it never totally left. Cotton grass has colonised some areas and various other simple grasses and wild flowers have seeded themselves to take advantage of the open ground and lack of competition. Invertebrates are present, providing food for the surprisingly diverse array of birds. Not huge numbers, but we did see woodlark, tree pipit, crossbills, a whinchat and various other common songsters. Deer are regularly encountered and even wolves have been spotted. Isn't nature wonderful? 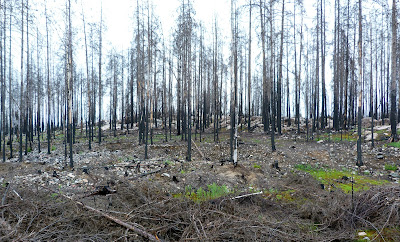 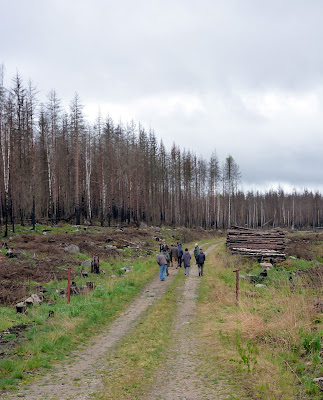 After a picnic lunch taken in the shelter of a belt of trees overlooking a large lake, shivering fingers transferring the welcome sustenance to fuel starved bodies, we moved into an area of green forest interspersed with small cleared areas and the odd farmstead. En route we picked up a local bird ringer who has been studying Ural Owls for many years. He and his colleagues monitor a network of 50 or so nest boxes over their local area and our afternoon treat was to accompany him on a visit to an occupied box. Ural Owls, despite their benign, almost innocent, appearance are actually quite vicious and will dominate most other predatory birds in their chosen territory. In particular their nest sites have been shown to contain the remains of other owls, especially the smaller long-eared and tawny.  So, it was quite important for us to let the expert secure the area before we all blundered in. Equipped with ladder and a large net, the ringer approached the box first. With the experience born of years he expertly caught the brooding female in the net, lowered it to the ground, disentangled it and put her on display for an admiring audience. What a bird, and so close. I confess that I wasn't altogether comfortable with the disneyfication of this exercise and at one point almost walked away: I wasn't the only one. However, the activity would take place with or without us because it is important to monitor the breeding success of the species. The birds are actually disturbed up to four times a season yet still return to the same boxes year after year so maybe they don't especially mind. In any event it was an instructive episode and one unique in my experience. These owls really are quite stunning. 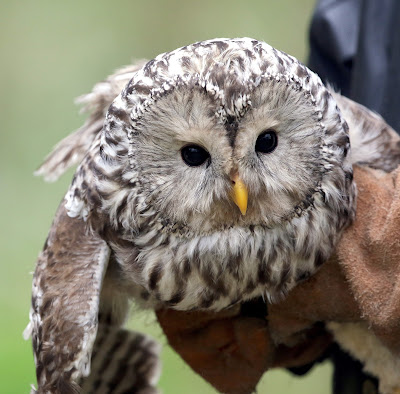 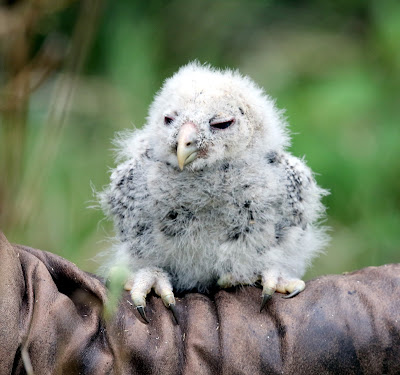 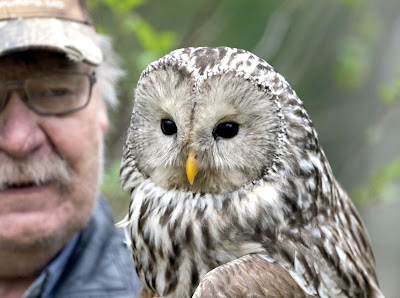 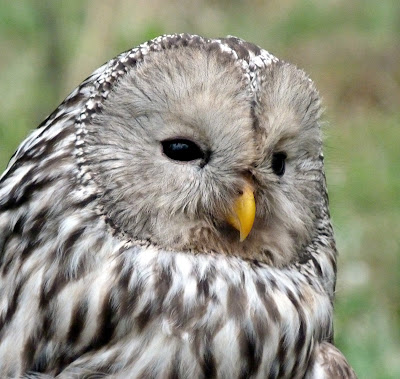 Following a much needed hot shower, dinner and a thoroughly deserved glass, or maybe two, of red, we once again ventured into the field to try and find some owls. Our first venue overlooked a rather uninspiring stone quarry compete with rust stained silos, conveyor belts and all the signs of industrial activity. We were then invited to spot the eagle owl. I commenced scanning the far ridges of the rock faces looking for suitable undisturbed nooks where these large birds could set up a home but could see nothing remotely reminiscent of an eagle owl or its nest. After a little while my much better half found the bird and with a smile Daniel, our Swedish guide, directed us all to the spot. There below us atop the ugliest pile of metal imaginable, was a huge cat like mound of spangled brown feathers from the midst of which a pair of deep orange eyes curiously gazed at us. These birds are mightily impressive and apparently go about their business quite unconcerned by the constant noise and activity during the day. The workers likewise respect the owls and although sometimes need to work close to, manage to avoid being carried off to feed the hungry chicks this particular female was then brooding. Ear tufts raised, this bird was a truly spectacular animal: the cold and damp were somehow quite forgotten. 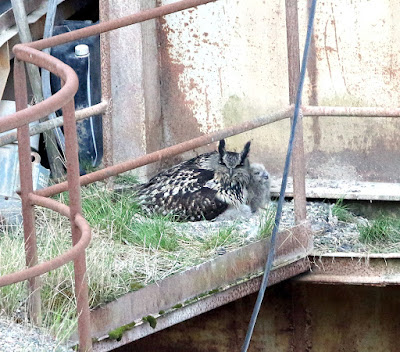 We trawled along various almost deserted minor roads and woodland tracks in a vain attempt to lure a pygmy owl but with no success. We did see several more roding woodcock though which is always nice. Once again I had no trouble sleeping, but wasn’t entirely sure about getting out into the field before breakfast the following day. But that, as they say, is another story……….