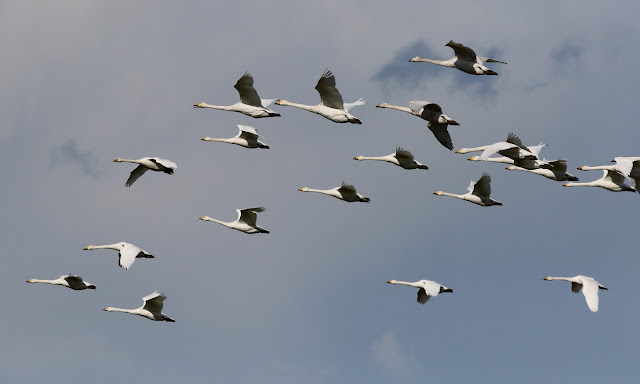 The Fens: at turn bleak and barren, flat and windswept, open and liberating; perhaps a landscape difficult to love but then it is just a shadow of its former self. Where once was a vast area of wet marsh, reed bed, bog and fen, interspersed with shallow lakes and channels pulsating with life, now is a seemingly featureless expanse of dark peaty soil, farmed and sterile. Surely the drainage of this immense floodplain was the single biggest environmental catastrophe ever to befall these isles of ours? Any thoughts of treating such an ecologically rich area with similar contempt nowadays would court international condemnation and be stopped in its tracks. Hopefully. But it happened and we are left with just a few pockets of traditional Fenland; oases in a sea of ploughed fields that stretch to the horizon and beyond. Just think what it must once have been like; just think what’s been lost.


But things are slowly changing for the better, giving optimism for a brighter future. Little fragments of land are being acquired by people that care and have a vision. That vision is to recreate as much of the old Fenland as possible, stitching it together to once again provide wildlife with a chance to prosper whilst giving people a chance to appreciate what a landscape scale wetland should be. Visiting one such area, the WWT reserve at Welney, over the weekend brought home to me just how important these areas are. The vibrant green recreated meadowlands of Lady Fen that are visible from the Visitor Centre were simply teeming with life. Everywhere you looked there were ducks and geese and waders and crows, flocks of starlings, gulls and marauding raptors. Broad winged lapwings careering about the sky on their courtship dances, freshly moulted brick red godwits feasting before the final leg of their journey north, or maybe thy will stay and breed here, coots chasing one another in territorial spats; things dabbling, diving, quarrelling, courting or feeding. Beyond the sharply delineated reserve boundary: nothing. A few pheasants and rooks and that was your lot. Stark visual proof of how well managed the reserve is, how informed restoration can bring about amazing change and how important it has become now all around is hostile. 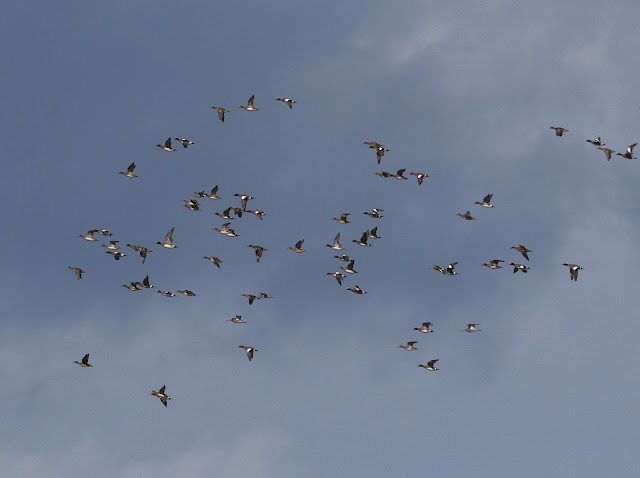 The birding experience begins in the car park. I mentioned in a recent post how in such landscapes an isolated line of bushes takes on new meaning, so it is here. The car park hedgerow provides a focal point for many small passerines that relish the cover. Most delightful were the tree sparrows chirping for all their worth and collecting twigs for their nests. Such a rare sight in the wider countryside nowadays so a special bird but one very reluctant to pose for a photograph. House sparrows flaunted themselves shamelessly, tree sparrows kept to deep cover. One popped up for a moment. Click click! Then it was gone. 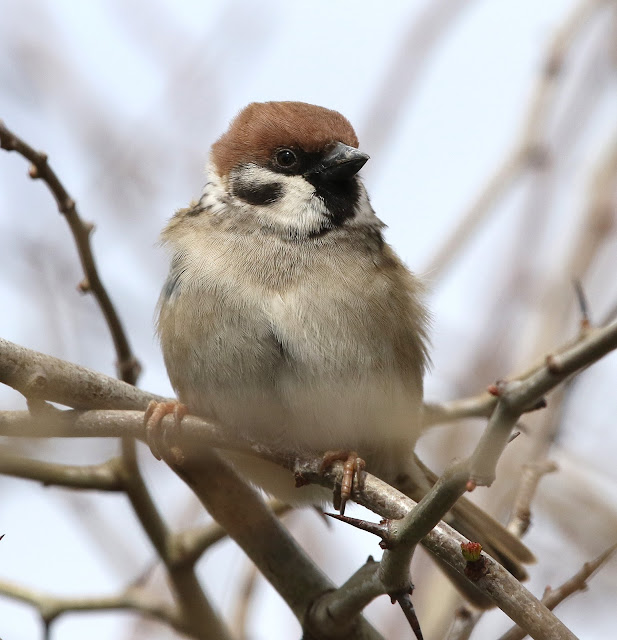 With menacing clouds of various shades of wet scudding swiftly overhead chased by a relentless sharp nor wester, the various hides formed most welcome shelter. From the comfort of the main observatory thousands of waterfowl could be seen, amongst them a small group of ‘Tundra’ bean geese hunkering down against the wind that howled unabated across the Wash. Further along a drake scaup entertained the few hardy souls that had trudged thither. It came quite close at one point when engaged in a spot of preening, allowing a rare appreciation of its finery. A handsome bird albeit in two-tone, except for the bright golden eye that occasionally shone jewel like when a parting of the clouds allowed bright spring sunshine to flood the scene. 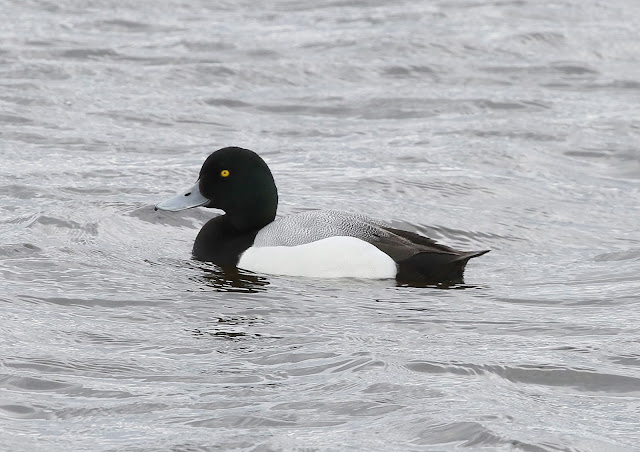 But the star attractions were the whooper swans still present in good numbers grouped together on nearly fields. Seeing them fly in white relief across the deep blue-grey of wide threatening skies, bugling their evocative calls, was a true delight. Later, a convenient pull in allowed quite close observation of these impressive and graceful birds, that is until some local on an off road motor bike decided to race up and down the fields in which they were feeding and resting, sending them skywards towards the sanctuary of the flood. One human, 200 birds displaced. Another reminder of how important unmolested reserves are for our wild creatures. 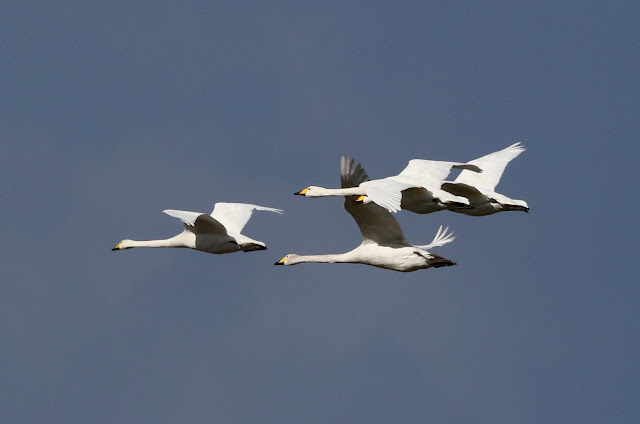 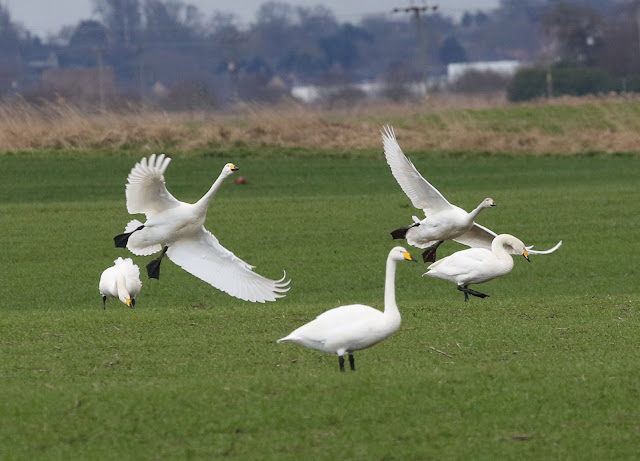