A bright afternoon with billowing white clouds sending smoky tendrils onto a base coat of sapphire blue, had slowly but relentlessly given way to a lowering sky of rain laden grey. The light that was so crisp two hours before was now retreating before the early gloom of dusk, bringing the day to what felt like a premature end. With the pattering of light rain, refreshingly cool, spotting our faces we sought sanctuary in the Hide. Here we could sit in relative comfort and watch the spectacle that was about to unfold. A true wildlife drama, one that would grace any Attenborough programme watched by millions, played out here to an audience of perhaps a dozen. A starling roost: a murmuration. 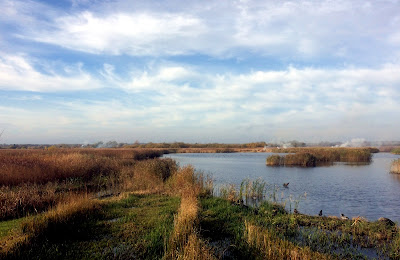 The dank murk seemed to have triggered an early gathering and by 3.30 there were already several thousand dark shapes, tightly massed, swirling over the reed beds. They twisted and turned as one, each bird reacting instantaneously to the movement of its near neighbours. The flock rippled and morphed; first a solid dark host and seconds later a graceful, rippling pulse. Ever changing; one moment a dark round ball, the next elongated waves; always flowing as a single entity. And then without any obvious cue the whole mass would plummet into the reeds as smoothly and swiftly as water flowing over falls. 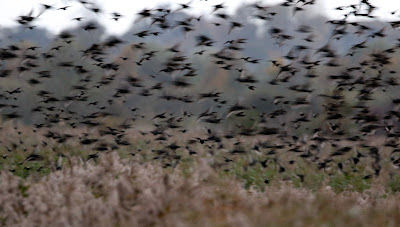 But the starlings were not alone. As streams more arrowed across the broad to join their brethren, sharp eyes of sparrowhawks awaited their chance. From the vantage point of a dead tree one of these ace predators scrutinised the new arrivals looking for a way to get an easy supper. It slipped from its perch, stooped low into a channel between the reeds and was lost to view. The assault must have signalled an end for one hapless individual, but the collective can sustain the loss of a singleton. Such is the nature of these birds existence. One moment alive and oblivious to imminent danger, the next a victim of death on wings.


Less capable, but nonetheless persistent assault came in the form of lumbering marsh harriers.  These large, slow raptors, more accustomed to surprising unwary ground based prey, seemed out of their depth when chasing swirls of fast moving objects. They lunged into the reed tops, talons extended, but stood little chance of making contact. Their subsequent laboured pursuits, flapping frantically on their broad long wings, bore no fruit. But surely, with such a throng at their disposal they would eventually strike gold? Not today. The trio chancing their luck soon gave up, finding their own roosting spot deeper into the reeds. 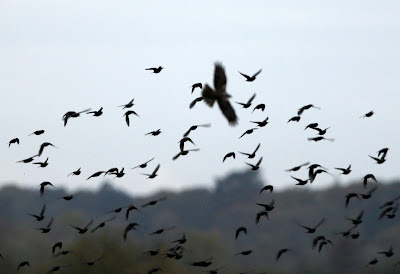 And still they swarmed. Parties of a dozen, of fifty, of two hundred hurtled without pause low over the waving reeds to plunge without ceremony into their depths. And once there they chattered, squeaked and chortled to one another in a fever. The sound of their discourse providing yet another layer of wonder; what were they saying to one another? 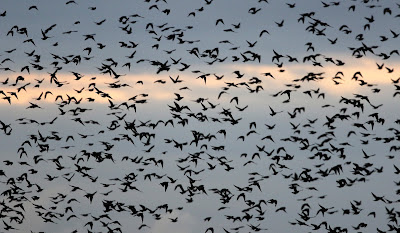 If any proof were needed as to why conserving such places as this is necessary, an hour spent at dusk watching the roosting birds would dispel any doubts. It is an oasis, a sanctuary, man managed but essentially left alone for wildlife to flourish. If 15,000 starlings couldn’t roost here then where would they go? If the sparrowhawks and harriers couldn’t fish for supper where would they go? Where too would the ducks and geese, the gulls, the otters, deer and voles go? And where would we go to find peace, to refresh our soul and be lifted by such sights and sounds? 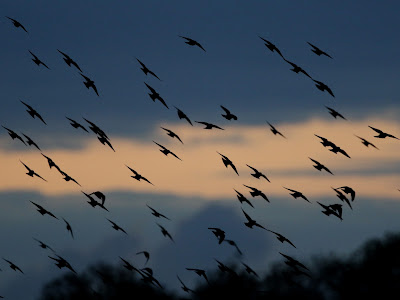 On this day we eventually decided to leave the host in peace. A chill breeze had sprung up and it was time we battened down the hatches and left this place. Left it to the thousands of gossiping starlings, the circling harriers, the jet black crows. We had been fortunate to witness a visual and aural experience to savour, all played out in a Broadland haven a stone’s throw from a large city with its own murmuration of speeding tin cans and scurrying pedestrians each racing home to their own roosting spot for the night.