Life in an Oak


There’s a tree by the church. An Oak, twisted and gnarled, ivy clad and sentinel. It grows by the wall; flint and brick, ancient and lichen encrusted, bowed and bent, ravaged by time. Both wall and tree have seen some sights, seen the passing of ages, the passage of time and man. What tales could they tell us? What stories could they reveal? If only they could speak. Instead they stand there silently through every extreme the seasons can deliver. They have seen some weather this wall and tree, seen deep winter freeze, long summer drought, torrential downpours and balmy autumn days when acorns hang plump and swollen like grapes. They have lived through wars and peace, seen kings and queens throned and deposed, seen man move from rural fidelity to cosmopolitan excess. Yet still they sit there as ever they were. They are entwined, for what came first? Surely the towering wall with a small, vulnerable sapling planted alongside? But now the roles have reversed because the tree is so large it pushes its roots, deep and wide against the walls foundations and threatens to undermine its neighbour of two centuries or more. Man must intervene and he has done so, restructuring the wall in places, rebuilding to accommodate the unrelenting growth of the tree; a tree that still has several centuries of life left to it. It seems there will be many skirmishes to come between these bastions. Both are an integral part of the whole, the essence of the churchyard. Both will find a place to survive and thrive well behind the lifespan of this author and you, the reader. A sobering thought if any were needed.


The tree has dependents; a pair of boldly spotted Mistle Thrushes have chosen it as a winter larder and are busy protecting the wealth of dark ivy berries that drape its girth from other pilfering beaks. I sat in my car beside the tree watching this aggressive duo as they chased away marauding Blackbirds that dared to mount a raid. No usurper was allowed more than a quick stab with a golden bill before one of its larger relatives dived upon it and drove it unceremoniously away into the hazel growth bordering the lane to the broad. Innocent Blue Tits and Robins were sent packing in similar fashion and a Grey Squirrel was left in no doubt as to his welcome; staccato rattles echoed around the otherwise silent churchyard in an expression of distaste and alarm. 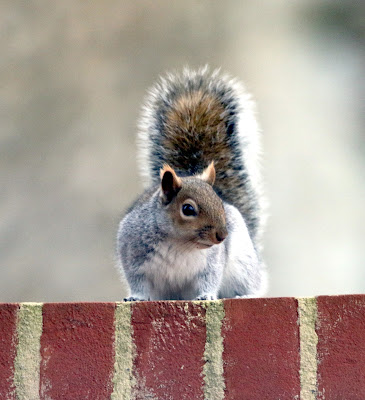 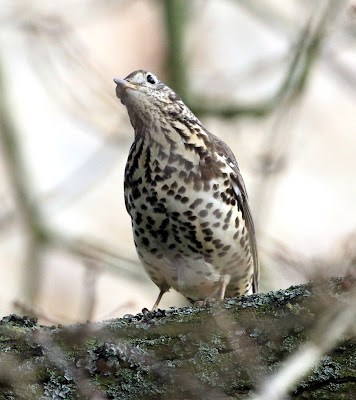 After a while a Woodpigeon hopped off the wall to waddle around the trunk of the tree reaching up to peck at any low growing berries. It was joined by three of its brethren that wasted no time gorging themselves as is their habit. No slouches these, for what seems a heavy and clumsy bird they displayed remarkable agility when seeking to strip berries from awkwardly growing sprigs. Spreading wings and tails wide to provide balance, they would dangle upside down and thrust their necks to fullest extent to reach a succulent morsel. And not once did either of the thrushes pay them the least regard. 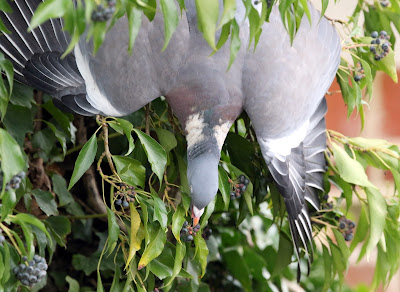 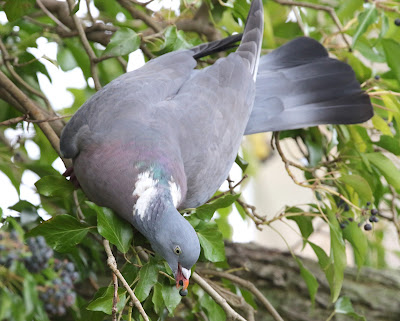 As I watched with camera poised, fingers numb with cold and an icy chill paling my face, I noticed other birds using the tree. A Nuthatch alighted on a branch, frustratingly out of shot, to tap at a nut it had found. It’s thick chisel bill making short work of the tough shell. A tiny Goldcrest crept amongst the thick glossy coat of ivy searching for insects sheltering therein. A Kestrel, all pointy wings and tail, arrowed over the church tower to perch briefly on the highest branch there to scrutinise the grass beneath for the slightest movement. And then blind panic as pigeons, blackbirds and other smaller birds exploded from the copse nearby, their notes of panic shattering the calm. A Sparrowhawk had scattered them, but remained unseen by me.


If any proof were needed as to the value of Oak and Ivy look no further. This one tree was full of life on an otherwise dead winter’s day. If provides both food and shelter for all manner of wild creatures and I felt privileged to be able to experience some of it for just a couple of hours of my own life. Sometimes it’s good just to sit and watch; the tree and its flint and brick companion will do just that for a long while to come. 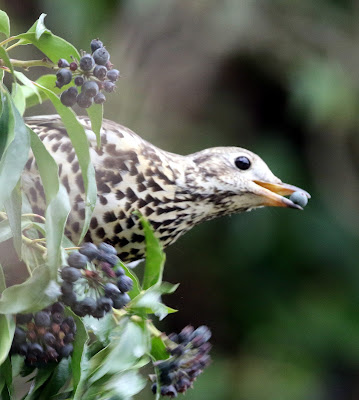