It is cold here. Bitterly cold. A raw easterly wind whipping in from the North Sea a mile or two away; the boundary between the flat lands of eastern Norfolk and the miles of cruel grey water marked by a line of raised dunes seen as a smudge of dull green on the horizon. The scene before us a patchwork of reed bed, course grazing marshes and fen, interspersed with twisted and stunted hawthorn. The closest you can get to a barren wilderness in this part of the world for there are but scant traces of human activity: a forlorn and long abandoned wind pump, its skeletal sail arm pointing defiantly skywards; a single distant house rendered almost invisible by its light coloured walls blending seamlessly into the gathering murk. Nothing else, just the wild open landscape unique to this Broadland haven. 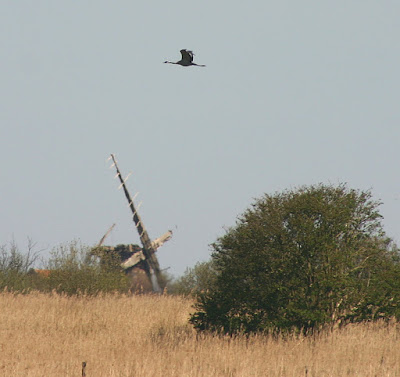 Us five friends have trudged to this spot, nothing more than a raised bank bordering a drainage dyke, to witness one of nature’s most thrilling and humbling spectacles; the winter roosting of the harriers. We are quite early, 90 minutes before true dusk, but already the leaden, squall-laden skies are casting their shadows over the marshes. Light is poor, visibility far from ideal, but we know the birds will come to seek out this quiet sanctuary to spend another bitterly cold night. And we don’t have long to wait before harriers sail in. First a dark marsh harrier, then a brighter male both gliding on slightly raised wings, buffeted this way and that as they cruise low over the boggy ground. Then delight; a ringtail hen harrier, its bright white rump shining as a beacon through the gloom. A flock of fieldfares appears in a nearby tree and jinking parties of smaller birds, perhaps finches or maybe yellowhammers, are flushed by a buzzard which perches atop a bush before joining another pair of harriers purposely heading towards their roosting zone.


Whilst our attention is focused on the raptors, a pair of common cranes glide over us, dropping down into a hidden pool where they are instantly consumed by the tall ranks of thick reed; lost to sight. These birds are doing well here, naturally arriving as a party of 9 nearly 40 years ago they found the place to their liking and took up residence. Slowly and painfully, with many false starts, the birds began to breed until we now have over 40 gracing the rich and fertile acreage around Hickling and Horsey. In recent years maybe 10 or so pairs attempt to raise young with varying degrees of success, allowing the birds to expand their range into other Broadland reserves and further afield into neighbouring counties. This success story owes all to the sterling efforts of local conservation bodies and landowners. Cranes have recently been artificially reintroduced to Somerset, but it must be remembered that in this remote corner of Norfolk where the harriers circle over the reeds and the bittern still finds refuge, we have had majestic cranes for decades. And they always manage to thrill us.


Things begin to hot up now with more harriers drifting into view, amongst them a simply beautiful, ghostly grey, resplendently perfect, male hen harrier. What truly gorgeous creatures they are, these birds of wild open spaces, moor, heath and marsh. This one drops to the ground seemingly finding his supper, an unlucky pipit perhaps, before he reaches the roosting zone. Through my telescope I can just make out his head tugging at the flesh of the prey he has caught. Such rare birds these and we are privileged to be able to see them in such a setting.


On past visits, on milder, sometimes even bright, winter evenings, the harriers, merlins, barn owls and cranes can put on a wonderful show with massed spiralling as a new bird joins the throng. Merlins arrow into the roost and will happily harass the much bigger harriers, chasing them across the vast open sky in sport. They choose to spend the chill of the night perched atop small hawthorn bushes whereas the larger raptors will roost on the ground or on low branches of dead and broken willows. The owls quarter the fields silent and relentless whilst the sky slower darkens and the stars come out to play. Not today though; the wind chill is numbing our hands, cutting through coats, hats and gloves and making our eyes water. We decide we have seen enough and head back along the narrow, lonely lane to the reserve centre.


Before this place became well known and over visited I used to walk back alone along this lane, bordered by high dark hedges, with all kinds of ghoulish fancies running through my mind. I defy anyone to make this lonely journey and not look over their shoulder every 100 yards, just in case there may be something following; a darker shadow amongst the gathering gloom, an echo of footsteps or an unnatural rustling in the bushes. Hard not to speed up against all reason to reach your car before darkness falls complete. It is the workings of M R James; the fleeting glimpse of something unholy, for nobody knows you are here and your screams will be lost amidst the howl of the wind.


For us five folk though, chatting as a group, we had no such concerns. We instead were lucky enough to see three more cranes, a family party probably, fly towards the broad before we sought welcome refuge ourselves in the warmth of the local pub. Back to civilisation, cosy and comfortable whilst close by there were the harriers roosting in the reeds, steeling themselves silently against the chilling bitterness of a moonless February night.