It's All About Timing


It’s been a breezy few days. After the spring like conditions we enjoyed early on, tempting robins to begin building a nest on the ivy covered wall just outside our kitchen, we were brought abruptly down to earth in midweek when winter returned to blow us, together with countless fence panels, briskly towards the weekend.

Wednesday saw me and a fellow nature lover traipsing across the sandy paths of Dunwich Heath hoping to find Dartford warblers to photograph. This area is managed by the National trust and in summer is ablaze with bright purple carpets of heather stretching as far as the eye can see; today the acres of heather were barren and bare, their crown of brown, empty flower spikes rattling in the unrelenting currents of air blasting across the gently undulating landscape of east Suffolk.  Stands of gorse, bedecked with coconut scented blooms, provided small oases of colour, but otherwise all was bleak. The birds were obviously in no mood to cooperate, hunkering down in the low growth where they search diligently for insects and spiders amongst the dense fronds. It is only when one pops up and perches briefly atop a sprig that there is any chance of getting a look at these fragile and vulnerable birds that are really far better suited to a dry, hot, Mediterranean habitat. We did catch sight of one of their number, no more than a small dark projectile, as it whirred away from us to dive into the impenetrable, featureless ranks of thick cover. And that was that. After 90 minutes or so we gave it up as a bad job and headed south to Minsmere, but not before bumping into a holidaying couple from Kent that had watched several Dartford warblers singing brazenly in the sunshine 24 hours previously. ‘You should have been here yesterday’ they said. They were right, we should have.


Once ensconced in the hide at Island Mere we were able to watch a party of eight ducks, the only wildfowl on show, three of which swam quite close. This was fortuitous because the wildfowl in question were goosander, a species seldom encountered around these parts. The breakaway trio was happily feeding in the shallows until I attempted to open one of the hide’s windows to provide a clear view for a photograph. Thirty seconds of cranking a handle accompanied by much creaking and groaning as the window tortuously lifted and the birds were gone, paddling their streamlined shapes off to a quieter area devoid of lumbering humans.  To cap it all, the horizon of dark clouds crept closer and began to deposit shafts of bitter rain.  ‘You should have been here ten minutes ago’ quipped another inhabitant ‘the otters came really close’. He was right, we should have. 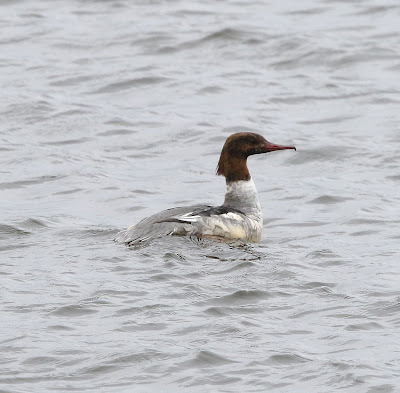 When the sky brightened to a lighter shade of dull, we retraced our steps to look for adders that had been seen by some lucky observers earlier that day. It was whilst forlornly looking for these early emergent vipers that things brightened up nature wise, for as we scanned the undergrowth, a pair of Muntjac strolled into view. Now I know these diminutive mammals are not native species, but I’ve rarely been able to have a prolonged look at one. Usually all you see is the white flash of their stumpy tail as they scurry away into cover; these were different happy to forage amongst the leaf litter in a most unconcerned manner. Rather attractive animals in truth with their distinctive dark chevron crowns and large, dark, liquid eyes. The buck sported a short pair of sharply pointed antlers and his elongated canine teeth were visible as he ate. Scent glands under the eyes give the appearance that they are suffering from some eye irritation, but all is normal. 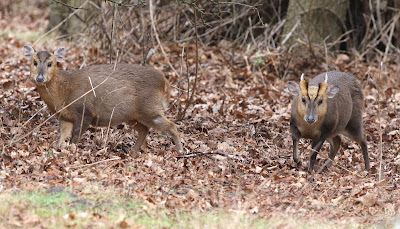 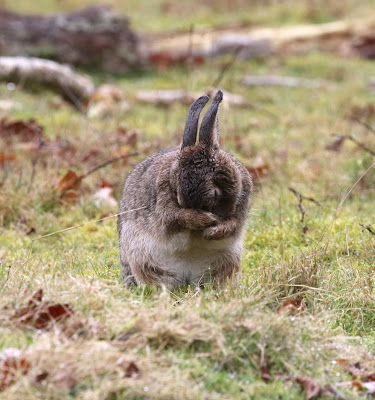 And then a stealthy movement through a belt of pines caught my eye, a trio of graceful red deer hinds slinked through the trees pausing now and again to look in our direction and take our measure. Surprisingly inconspicuous for such large ruminants these animals tarried for a while before slowly sauntering away becoming lost to view very quickly amongst the mass of twisted and brittle branches. Thinking ourselves fortunate indeed, imagine our surprise when some little time later we came upon another pair of red deer feeding right next to the trail leading around the famous Scrape. This pair had obviously got very used to humans and munched their way through a bramble patch with scant regard for our clicking camera shutters. Five minutes later they turned and strode away, melting into the screen of reeds as if they had never been within our midst. With a broad smile my companion observed 'We arrived at just the right time'. She was right, we had. 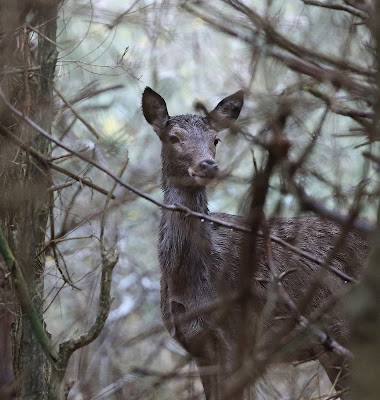 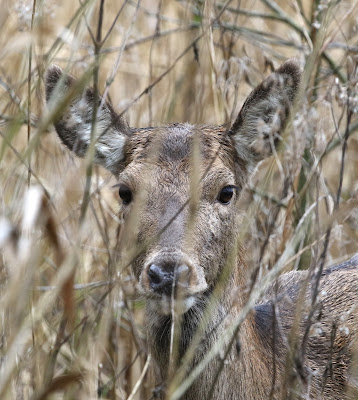