On a Summer Afternoon


Summer. The season when the fancy of every birder temporarily moves away from those avian creatures we love so much and migrates to a variety of other winged creatures - the insects - that at this time of year proliferate. The hemp agrimony, golden rod and buddleia scattered around the garden now play host to a bewildering variety of flies, butterflies, beetles, spiders and other tiny denizens of the undergrowth. Close scrutiny of the flower heads reveal a rotating cast of characters that is quite literally buzzing.


Armed with my new toy, a Sigma 105mm f2.8 macro lens, I spent some time over the weekend admiring at close quarters various striped, spotted and otherwise decorated bugs as they went about their business supping nectar, gathering pollen, mating and predating. I live in Sprowston a suburb to the north-East of Norwich in an area developed during the 1930s. Apparently our immediate surroundings once comprised fruit orchards and certainly when we moved here in the mid1980s there were plum, cherry and apple trees all around. Over the intervening 30 years many of these ageing trees have succumbed to disease or have been felled by strong winds, but a few remnants survive. Gardens from houses on adjoining streets back onto one another effectively forming large blocks of green space; in our immediate area perhaps an area of 2 acres is enclosed in this fashion. A valuable wildlife habitat. The overall viability of the area as a breeding ground for birds and insects has diminished somewhat over the years as older residents who could no longer manage their large plots sadly pass away or move out and younger folk with more vigour move in. So, whereby there were once significant areas of neglected grass and scrub, there is now decking, summer houses, bouncy castles and carefully manicured lawns. Because of this we seem to have pretty much lost such insects as grasshoppers and the hitherto large numbers of grass loving butterflies, but there are still a bewildering variety of goodies to be discovered.

Our particular garden covers an area of about 30m x 10m, that’s 300m² that at times resembles untamed jungle. But there is a kind of order. Over the years I've grown wild flowers from seed, the aforementioned hemp agrimony being one such. Those attractive pink spikes have seeded themselves here and there as have ox-eye daisies, red and white campion and meadowsweet. There is a small lawn, mown sparingly, which is superficially green but on closer inspection is made up of various mosses, clover, buttercups and lots of yarrow. Live privet hedging borders either neighbour and we let this flower before pruning. Ivy and honeysuckle weave amongst the hedging and over the shed whilst here and there native trees have sprung up; some from conkers, acorns and other seed planted by my lad when he was young, others arriving naturally via birds or airborne distribution. Whilst these trees are lovely to have there will come a time when they outgrow our modest plot, but for now they remain to add diversity. Then there is my pride and joy, a pair of ponds, one sited in the depression left by the extraction of an old and sadly missed Victoria plum that had terminal disease; the other dug just for the hell of it. The list of visitors to and residents in these oases beggars belief. Then of course there are lots of ornamental annuals and bedding plants as well as pots holding the sweetest smelling roses you could imagine. And there is dead wood, the rotting trunk of a cherry tree that has provided rich pickings for woodpeckers, song perches for many birds, nesting sites for solitary wasps, host for fungi and a support for our linen line. Yes, dead wood has a multitude of uses.


So, back to that small patch of mixed hemp agrimony and golden rod. The chief diners were bees and hover flies. The bees came as several species from the humble honey bee, through various bumble bees to tiny solitary species that so far I have not been able to identify. Likewise the hover flies appeared in several forms including one monster that when seen initially from afar I mistook for a hornet. These tiger-striped sugar lovers provided the photographic challenge of the day - trying to capture one in flight. Tricky, but the results were reasonable. 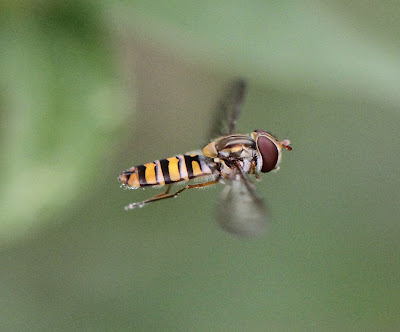 But all is not a bed of roses for these little chaps because death awaits them at every turn. Periodically a predatory wasp would appear swiftly inspecting flower heads for unwary bees that it would capture and carry to its nest there to feed its offspring with fresh meat. I don’t know where these ferocious predators build their nests, so further investigation needed here. Stealthier was the crab spider, well camouflaged and patient, positioning itself on the edge of the bloom awaiting some hapless insect to blunder within striking distance of its poison laden fangs. I watched this eight eyed mini monster firing a string of silk towards a more favoured position which it would then use as a tightrope to travel from one flower head to another. Fascinating. Butterflies dropped in from time to time, holly blues and green-veined whites, whilst ladybirds hunted aphids. A busy scene indeed.  I love our small slice of England, especially when it is full of life on such a summer’s day.