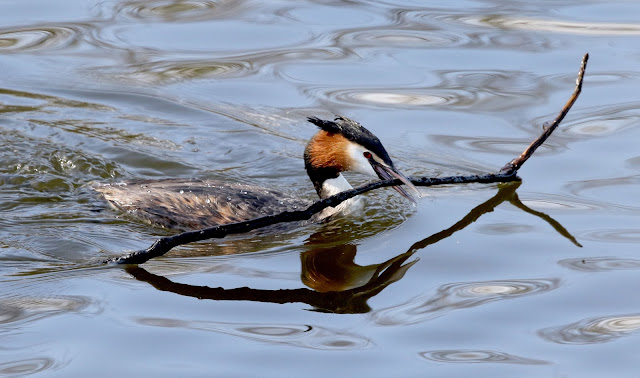 Although the Broad is effectively dead; devoid of any submerged aquatic vegetation, without invertebrates and their attendant fish, untroubled by mass hatching of dragonflies and minus any floating, flowering plants such as lilies, it does have a surprising number of great crested grebes. There is something like a dozen pairs of these streamlined, dagger-billed water birds scattered around the fringes of the clouded waters each setting up territory, there hoping to raise this year’s brood. They feast on the bream, perch and silverfish fry that teem in the shallows, bottom feeders not dependent on clear water for their livelihood. In the early morning of an April day, a scan across the gently rippling water will show a scattering of courting pairs, head shaking, down preening, deep orange frills spread; with head tufts raised, red eyes staring intently at their mate they will perform their graceful mating dance. Invigorating, mesmerising and beautiful. 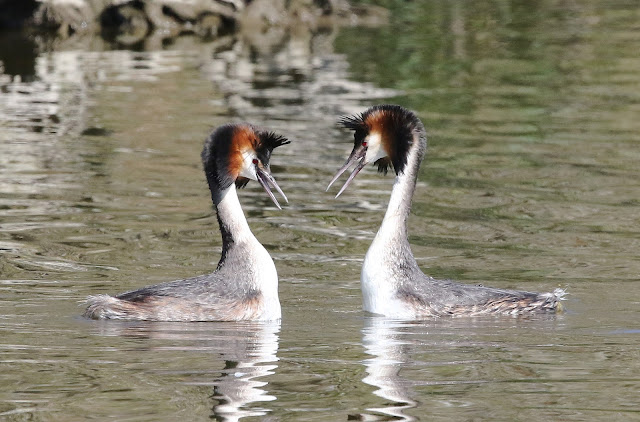 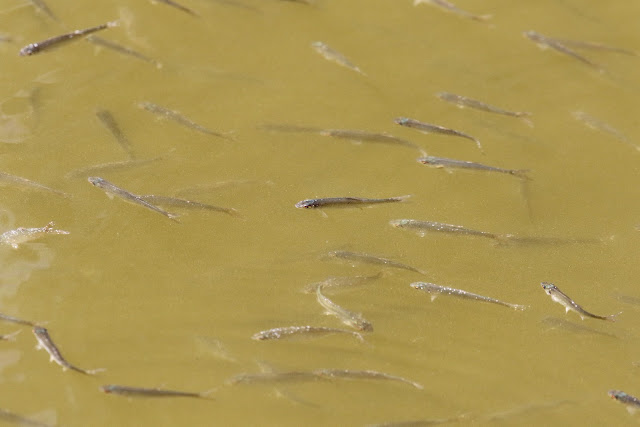 Anchorage points for their flimsy nests are few and far between so competition is keen for any prime spot, one such area being close to the Visitor Centre thus allowing a chance to observe their behaviour up close. Three pairs are busy sorting out housing rights here, one seems to be quite settled but the other two pairs are playing a game of cat and mouse to determine dominance over a particular patch of partly submerged tree stumps and drooping branches of sinking sallow. One of these pairs did have a nest partly built and tucked away behind the Centre, but this was flooded out shortly after completion; they have set eyes on a more stable nest site. The pair in residence are none too happy with this intrusion. During the course of my shift last week I watched the displaced pair try on numerous occasions to usurp the other. They would wait until the coast was clear and then swim quietly to the favoured nest site, loafing around waiting to see whether they would get away with the trespass. Sometimes they had the place to themselves for a few minutes, but mostly were met with lowered posturing, loud growling and a head on assault. They always escaped by either skittering away ungainly across the water or diving back to a safe distance across, what is to us, an invisible territorial boundary, there to loiter until they judged it safe to try again. 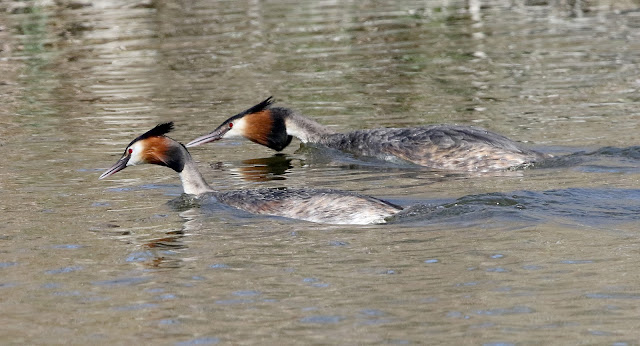 Whenever the victors saw off their rivals, they would approach one another and with keen grunts of excitement treat us to their fabled display; once rearing out of the water to perform what should be the incredible weed dance, only here there is no weed so a beak full of detritus has to suffice. Wonderful to observe never the less; what better way could nature devise to reinforce the pair bond? 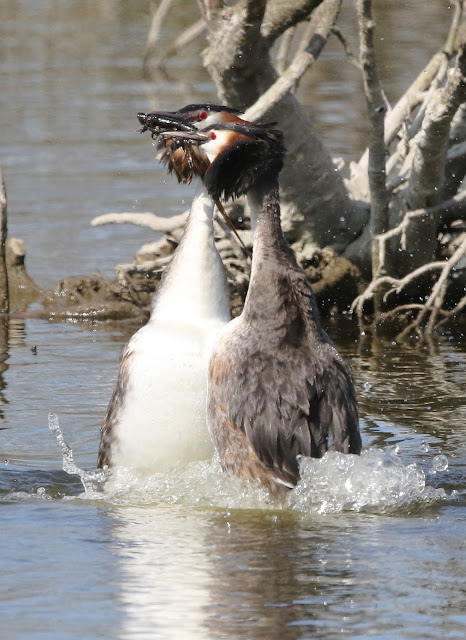 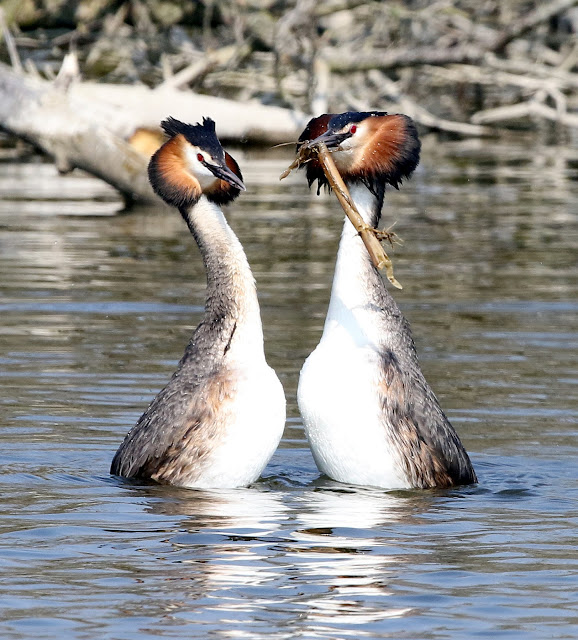 These birds will sort themselves out before too long. It seems the dominant pair of this trio may well be the pair that had many misfortunes last year (see 30 Days Wild - Daylight Robbery ). They appear to have learned from their mistakes and are attempting to build their nest in the V of a tree stump, several inches above the normal water level. If they manage this without the ever attendant gulls and predatory otter spoiling the party they have a good chance of a successful hatching. We will see. 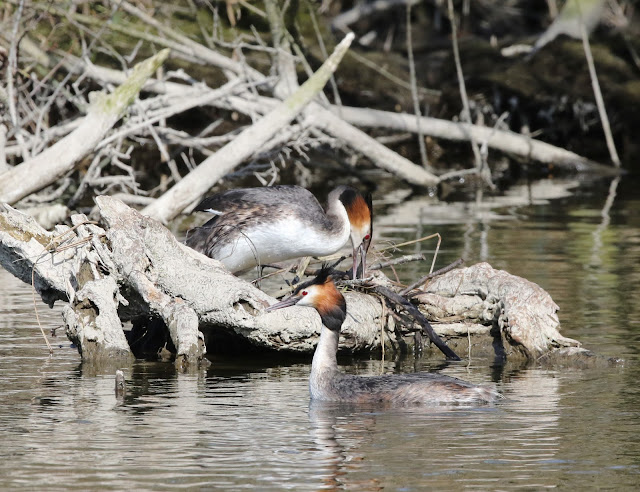 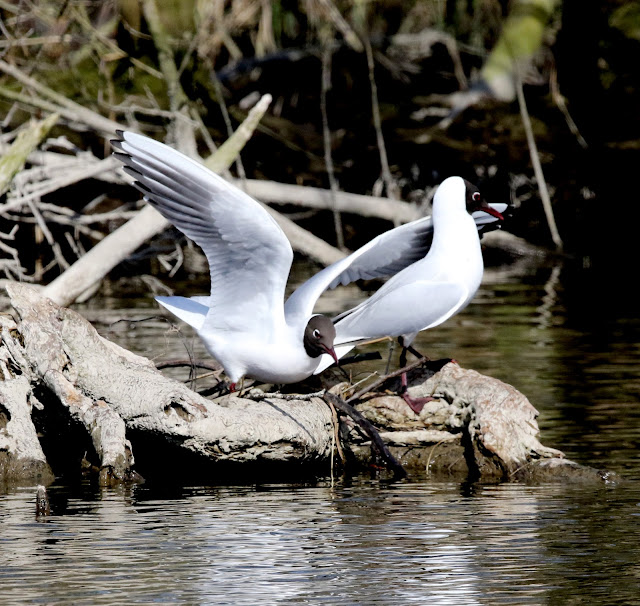 There are exciting, ambitious plans for the future of Ranworth Broad. If the plans work, everything I spoke of in my opening paragraph will be reversed to make this a true wildlife haven with a thriving diversity of life. The grebes and all other hard pressed residents, including us interested humans, are in for a treat.