What drives these minute little birds to make the journey? Why do they take such a huge risk? Launching themselves across the cruel broiling sea in a seemingly hopeless attempt to reach more promising feeding areas, safe from the advance of winters bite. The odds are so severely stacked against them, but still they come. And for the past week or so they have arrived in their thousands; Goldcrests mainly, minuscule packages of feathers no bigger than your thumb. On our east facing coast every stand of bushes or trees has held several of these incessantly active bundles of feathers; busy stocking up with the slim pickings of autumnal insect life to replace the energy expended in their epic journey across the featureless waters.


A look at the weather chart, or indeed poking your head out of the back door, over the past week would show lowering, rain filled cloud driven by a strong North-easterly wind clipping eastern England. The low pressure area producing these classic autumnal ‘fall’ conditions picks up migrants leaving Scandinavia and northern Europe, even as far east as Russia, and throws them westwards towards our shores. And that is a marvel, a marvel of nature that happens every year here in our county. This year’s cast of displaced waifs, yellow-browed warblers, Pallas’s warblers, red-flanked bluetails, other warblers and shrikes have not disappointed the crowds of birders that eagerly await such events.


Not wishing to join the obsessive throng however, I chose to see what I could find in the quieter area of the dunes at Waxham last week. It was very soon clear that a major influx of birds was taking place with restless flocks of redwings and fieldfares very visible. I ambled south past Shangi-la (a well-known birding landmark - a beach house surrounded by thick vegetation) and found a sheltered spot protected by low scrub to simply stand and wait for the birds to come to me. I was royally entertained. Goldcrests moved past and around me in a ceaseless stream, uttering their high pitched contact notes as they busily hunted for sustenance. Some of these delightful, innocent faced little creatures came so close I could have easily reached out and touched them. They were constantly on the move, twisting their inquisitive heads to peer into every nook, their dark, beady eyes looking for tiny morsels with which to pluck off the yellowing leaves with their dainty, pointed beaks. They would often hover in hummingbird style to investigate the underside of foliage and I tried to capture this behaviour on camera, but the poor light and deteriorating weather made that task most difficult. After a while I put the camera away and simply watched. 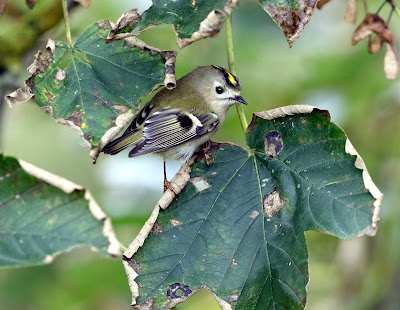 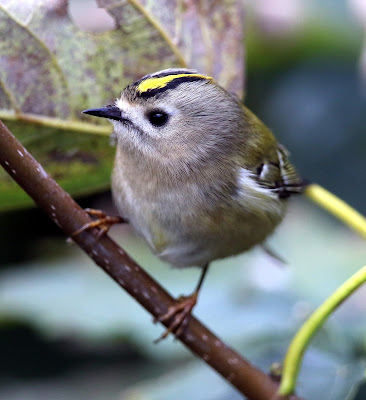 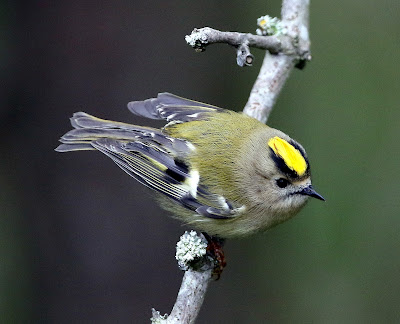 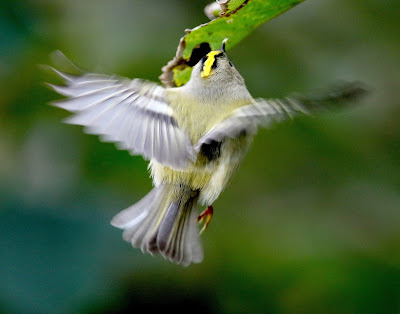 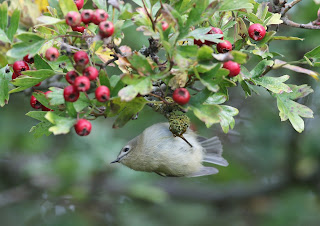 These October influxes vary in their intensity, sometimes numbers of migrants are relatively low, sometimes much more significant. It is a hazardous undertaking though, and I once watched goldcrests being picked off by greater black-backed gulls a few metres from the shore at Mundesley a few years ago. On that occasion I also followed the progress of an exhausted lapwing that was struggling to make landfall. This poor bird flew inches above the waves in a labouring attempt to gain the beach. When only 20 metres from dry land it ditched into the sea and drowned. So sad, but simply one visible episode of a much wider saga played out across the oceans; these dramas must happen a million times every year well out of our sight.


So, to answer my opening questions. I guess the reason these diminutive forms show up here is essentially an accidental consequence of adverse weather. No doubt small numbers do intend to winter in our relatively mild clime, but most are making their way into southern Europe or even further south and east. I’ve just been looking through some ringing recovery reports which show goldcrests ringed in Norfolk during October seem to move back to mainland Europe (Belgium) as soon as conditions improve where they will presumably continue south to their intended wintering areas. Many will die here because they cannot find sufficient food, they are predated or simply too exhausted. Whilst they are an undoubted delight to observe, let’s hope for their sake that conditions soon improve to allow them to reorient and live out their short lives in peace.