The Sap is Rising


Life is tough if you're a male bird vying for a mate; it can get physical. Very. I spend every Wednesday volunteering at Cley Marshes and this week in the most welcome rays of a late winter sun the birds were getting frisky.


First it was the marsh harriers. The resident pair are in the process of setting up home in a patch of reeds they have made their own for the last three years. Both birds are recognisable for their quite extreme plumage; the female being splendidly bright and well-marked and the male being almost uniform dark without any discernible wing patterning. But today an interloper appeared in the territory, another male, and he was not welcome. True to form it was the mature and experienced female bird that saw him off, rising with speed to intercept his intrusion with talons poised to strike. The imposter didn't linger and after a brief show of bravado continued on his way.


Then the shelducks. I counted about 50 of these boldly patterned, goose-sized wildfowl inhabiting the scrapes. Nearly all were paired up and inevitably in such a confined space squabbles broke out. These confrontations which are preceded by a rapid cackling emitted by the protagonist are a common feature of spring. Most amount to nothing of import; no more than the equivalent of a squaring up between Premiership footballers, but sometimes, and more frequently as the mating urge really kicks in, they can become a touch more meaningful. On these occasions pairs give chase to each other with much splashing and whirring of wings. The drake birds will launch at each other and come to blows. Quite spectacular when you can freeze the action. 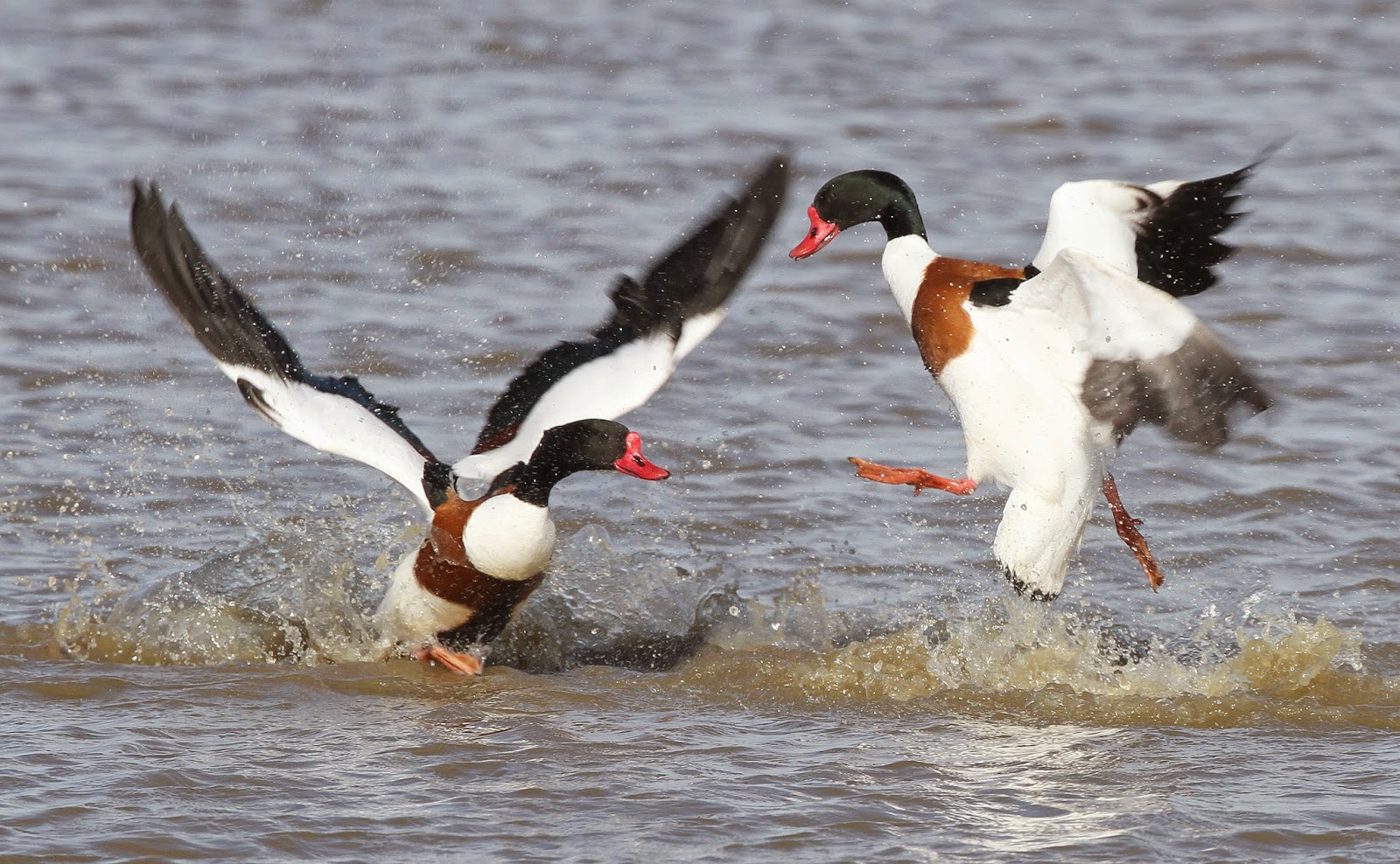 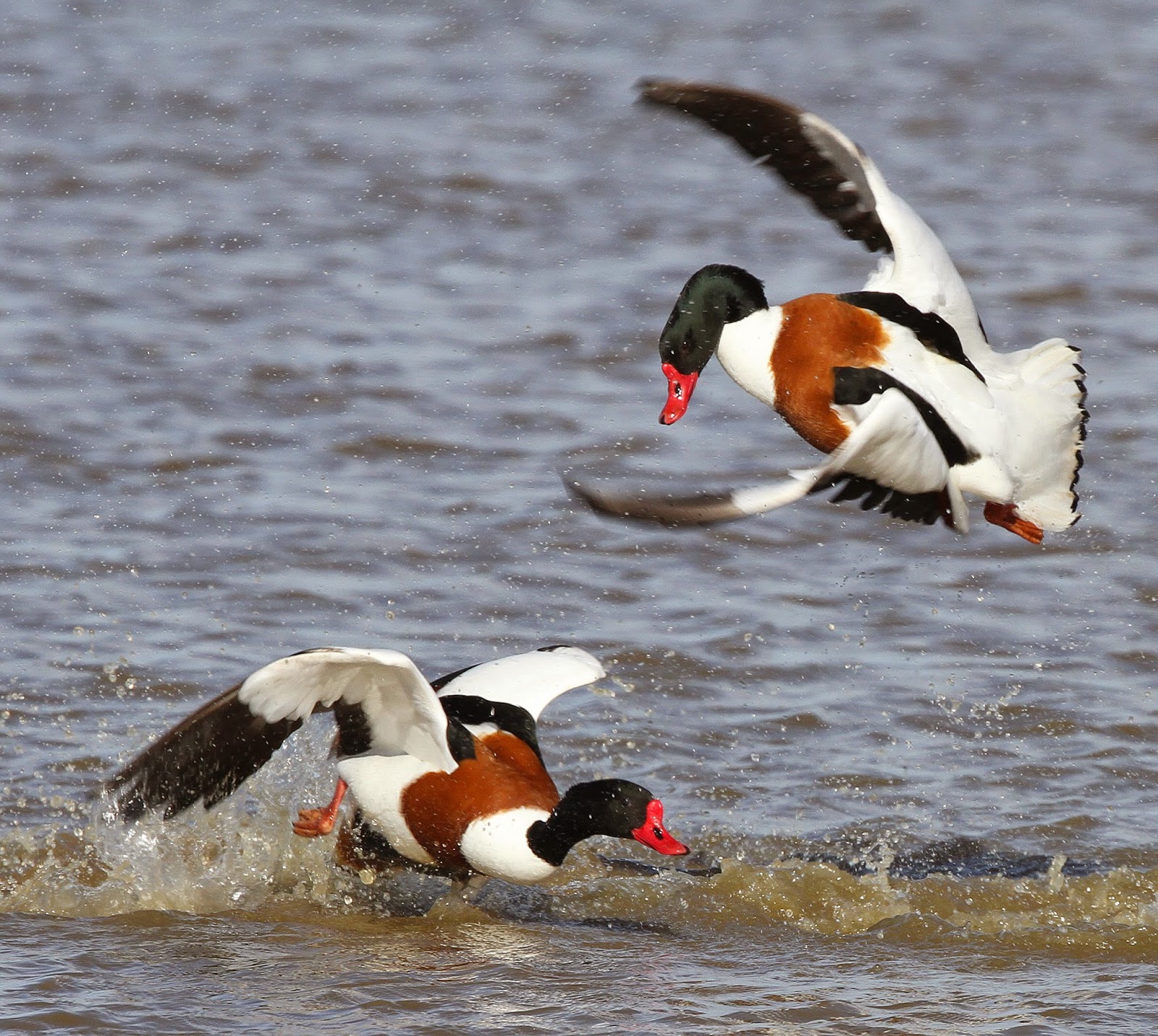 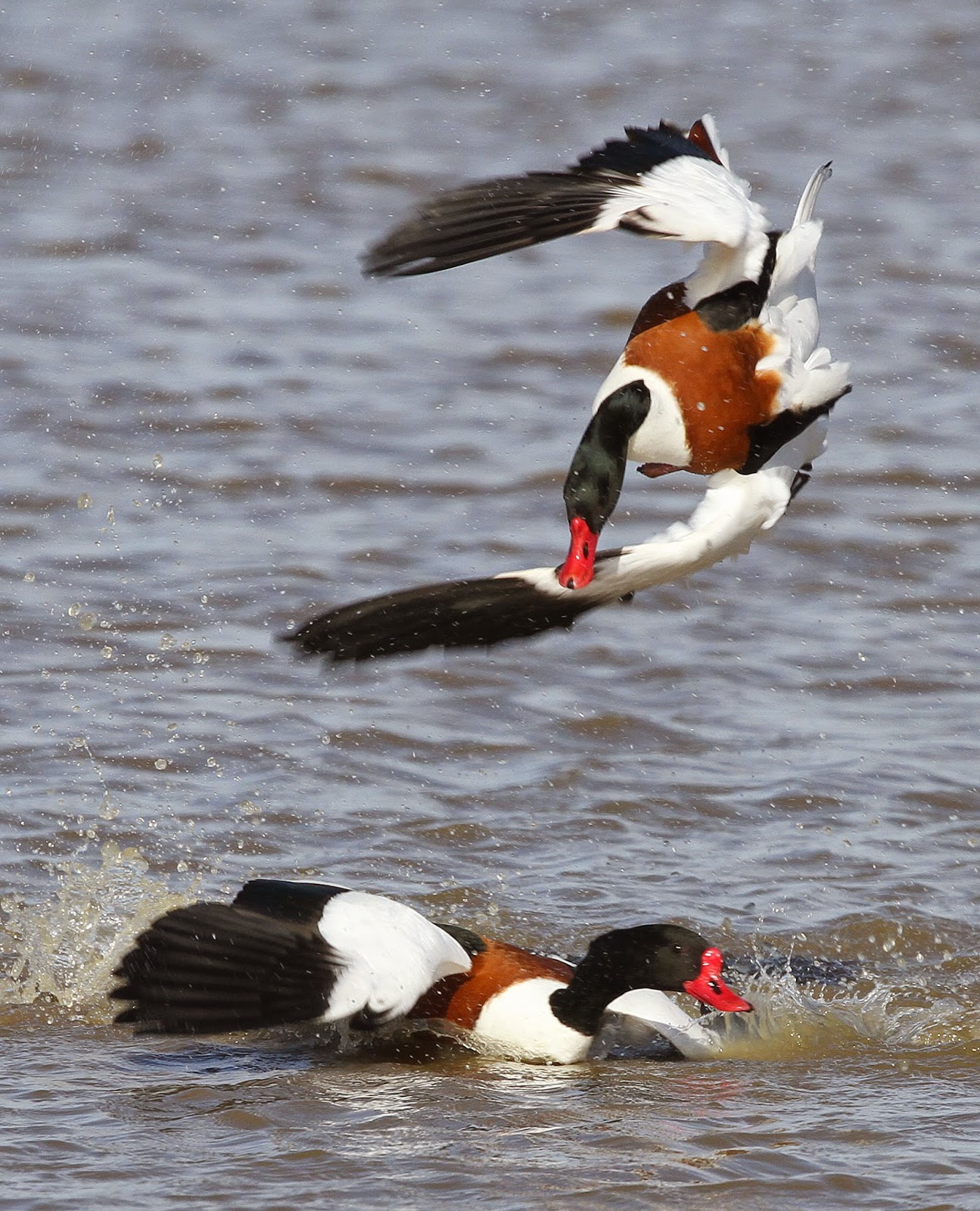 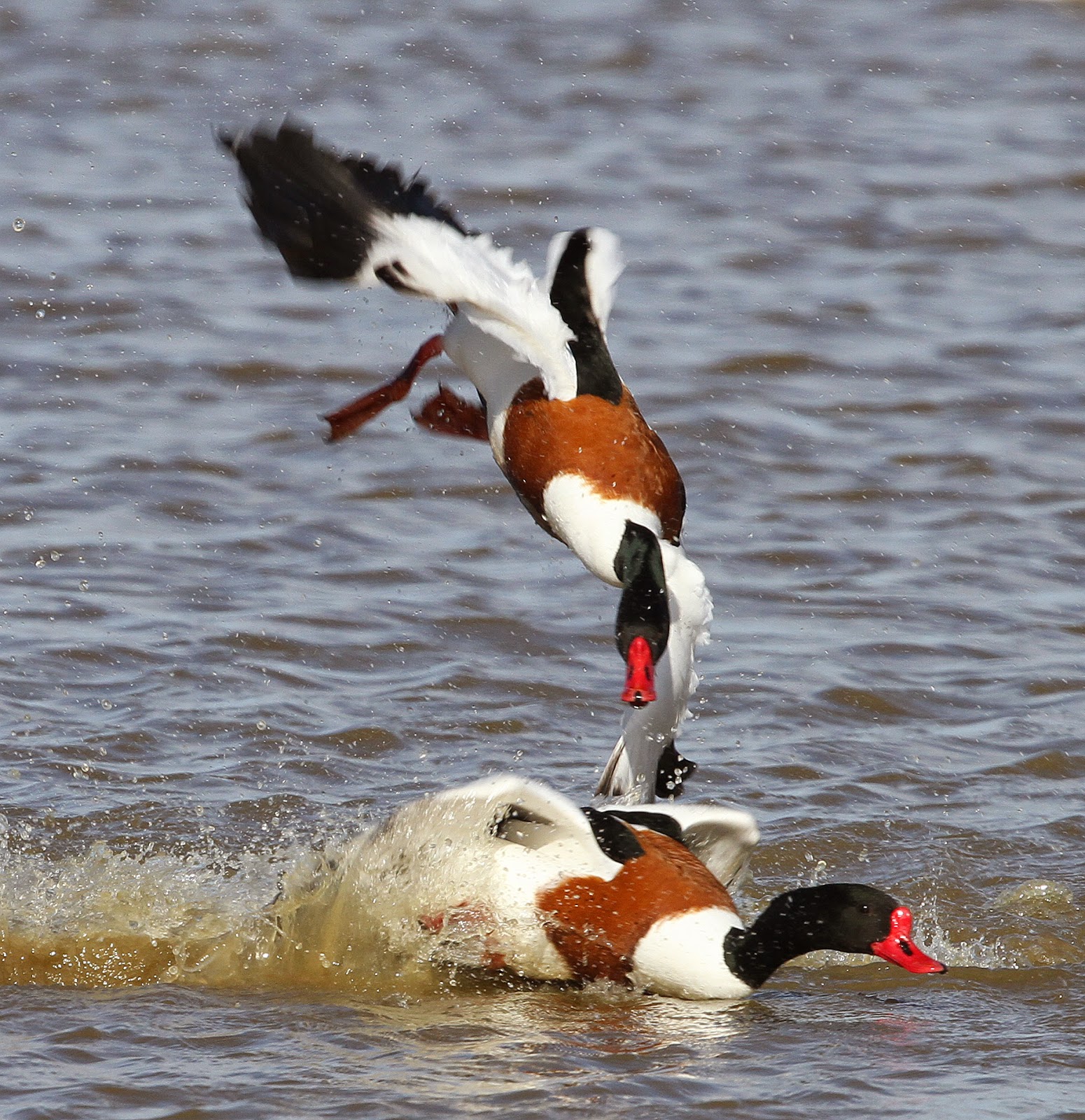 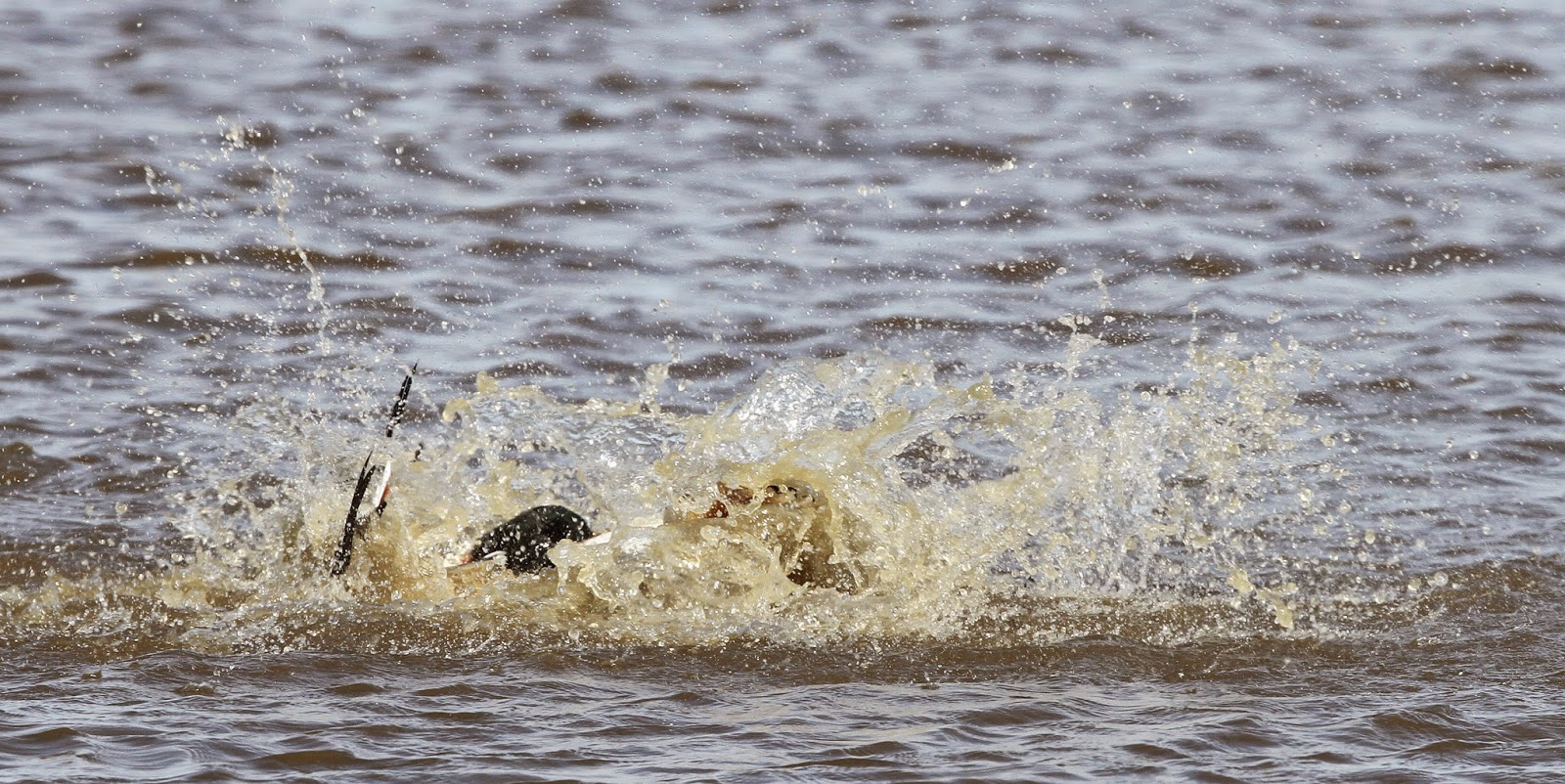 Later in the afternoon I was intrigued by what I at first thought must be a large mammal bathing in one of the pools. Closer inspection showed this bedraggled mass to be a pair of grey lag geese locked together in an intense duel. The birds must have been fighting for some time as their plumage was muddied and waterlogged. It seemed a complete stalemate, but eventually they released their grips upon one another and broke apart. The victor wasted no time in chasing the 2nd placed bird away, although quite how they could tell who had won this particular brawl is anyone's guess.


There were other milder and less dramatic rituals taking place between rival lapwings, dunnocks, little egrets and skylarks, but none quite as physical as those mentioned above. So, the sap is certainly rising and there will be many more skirmishes between various species before things settle down. It does make for an interesting time though and allows us to witness behaviour not seen at any other time of year.