Day of the Long Tails


Who amongst us doesn't regard long-tailed tits as charming little birds? They would, I imagine, be considered a common enough inhabitant of our woodlands and wayside, but just how numerous they really are was brought home to me on a visit to Strumpshaw Fen earlier this week. A stroll around the reserve on a dull day was brightened considerably by watching the nest building antics of several pairs of these perky little birds as they buzzed through the still bare trees looking for lichens and spiders webs with which to construct their well-hidden domed nurseries. My first encounter was of one rummaging around in the humus close to the woodland trail. Wondering what this innocent faced mite was doing, I approached closer to discover this bird plucking breast feathers from a dead woodpigeon. A little gruesome, but it was simply exploiting an easy source of nest liner; this soft down will insulate the structure from the rigours of spring’s wind, rain and chill. Further along I encountered a second pair uttering gentle 'tac' notes as they added moss, lichen and a binding of spider web to their nest situated in a low bramble. Bramble is a favoured nest site offering good concealment, dense rainproof cover and a thorny deterrent to would be predators. I watched this pair for 30 minutes as they made regular visits to add to the intricately woven ball. On each occasion the bird would jump into the half built nest, add their new material, wriggling their tiny bodies to optimise the shape of the cup and then do a bit of gardening around the edge. Both sexes performed in precisely the same manner and clearly had equal shares in the construction process. Totally oblivious to my presence visits were made every 2-3 minutes, a rate that would allow the nest to be fully constructed within a very few days. Quite a feat for such tiny sprites and the finished article is a real work of art and incredibly durable.
Fifty metres further along whilst chatting to a friend I met by good fortune, we realised another pair of these endearing creatures were nest building in another bramble bush close by. More buzzing, more 'tacking' and more feathers. As I moved around the reserve I encountered no less than seven pairs of these pink hued residents diligently engaged in nest building, and I guess I only really skimmed the surface as I didn't walk the river path and in any case only saw those directly adjacent to the woodland trails. I was mildly surprised at these numbers and equally impressed by the synchronous way the species seemed spurred into breeding action. 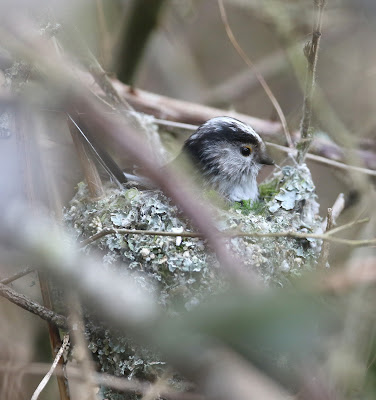 But it is not just the woodland birds that are engaged in the early stages of breeding, for out on the open water mini soap operas are being performed all over. The grey lag geese are noticeably paired with territorial ganders thrusting their necks out at any perceived intruder. Other members of their species are dealt with mercilessly, chased across the broad with much loud honking and ceremony. Smaller, totally innocent mallards, gadwall and shoveler are not immune from the testosterone fueled posturing and will be seen off with a threatening lunge.


Coots are similarly engaged in their cantankerous territorial skirmishes. Any potential infringement of what are to us invisible boundaries, results in the violated bird arching its wings high over its body and swimming purposefully towards the transgressor. Often the threatened bird will swim back to its own patch of reed fringed water, but if it does not then there are sure to be sparks. The ensuing fights can be brutal and violent; both birds contorting themselves as they launch at one another with their cruelly clawed feet. Last week I saw a fight between three pairs; all six birds flailing at each other wildly, causing the waters to boil. But all will settle as boundaries are firmly established and the birds will soon settle to building their woven platform of broken reed fragments anchored to others still standing. 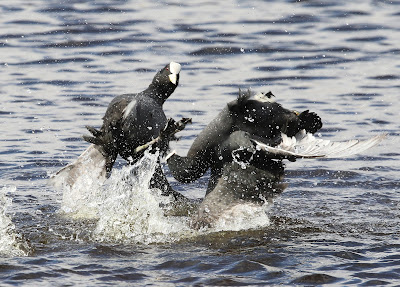 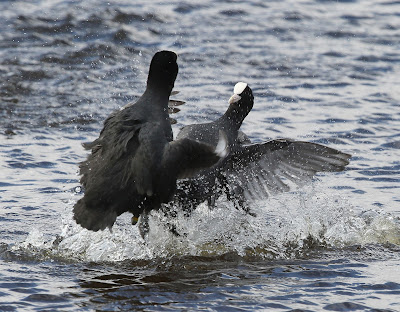 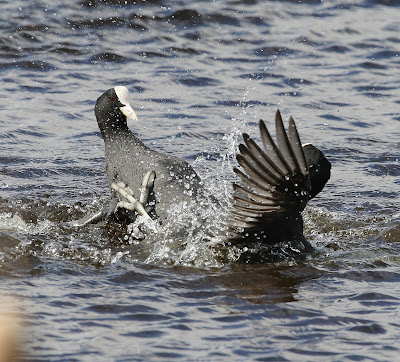 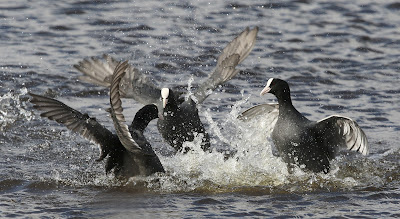 It is hard to turn mid-March into mid-May as much as we would will it, but there are sure signs that the season is advancing. Unseen by us townies the countryside is astir; birds are paired and nesting has begun; queen bees have stirred from hibernation and are seeking fresh nesting sites to raise this year’s brood; frogs and toads are well into their spawning and if you listen closely you can almost hear the earth creaking as the myriad shoots of legion plants reach towards light.


It is all too tempting to hurry the season along, but as I gazed at a withered posy of snowdrops I realised it was only a couple of weeks ago they were shining as bright beacons in a desolate winters glade. Now they are over, all too quick, so we should perhaps simply let the world unfold naturally and appreciate what we can see whilst it is on offer. Savour the day and take delight in the small things. Certainly watching tiny long tailed tits attending to their domestic duties was a delight and I feel privileged to be able to witness such things.