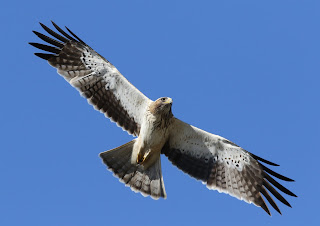 The minibuses came to a halt, pulling into a conveniently sited recess along a road bisecting gently rolling coastal heathland. Our group of eager nature lovers disgorged as quickly as their maturing bodies would allow in order to see up close booted eagles, a pair, that we had spotted hunting low over the sandy ground. Binoculars were swiftly raised in the expectation these raptors would fly away from the press of humanity pouring from their metal boxes like toothpaste squeezed from a tube, but the eagles had another imperative; the need to 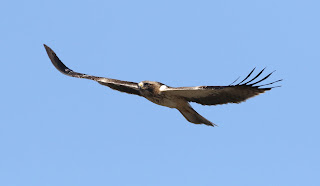 find food outweighed their natural fear of all things human. These beautifully marked birds were on migration, moving south from breeding grounds in the north of Portugal, or maybe somewhere in Spain, to spend the winter in Africa. Now encountering the vast expanse of the Atlantic, they would have to change course and move along the southern shores of the Iberian Peninsula to find the narrower crossing point across the Gibraltar Straits. Meanwhile they were seeking sustenance to fuel their marathon southerly flight. We stood in awe as these birds glided to and fro only metres above our heads, scrutinising the ground beneath with razor vision in the quest to locate the eye baffling dart of a lizard, the inquisitive scurrying of a mouse or the clumsy lumbering of a beetle. All would be a welcome snack for a hungry hook-billed migrant. 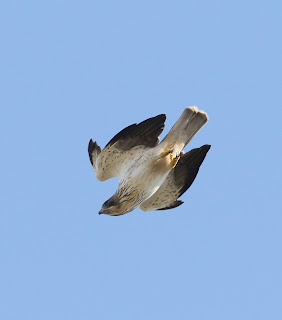 So we watched as these birds tacked into the breeze and slowly, gracefully, quartered the scrub covered soil. At intervals the languid glides would transform into a purposeful plunge
with the bird pulling its broad wings close to its body and arrowing earthwards; a feathered
missile hurtling down towards some creature whose unwary movements had arrested attention. We were privileged…...


Just one memorable episode from a week spent with a dozen other kindred spirits in southern Portugal courtesy of Honeyguide Wildlife Holidays sampling the wildlife on offer in an Iberian autumn.
The trip did not start well with 48 hours of incessant heavy rain which caused widespread flooding in coastal towns and consequent damage to livelihoods and property. As a consequence, our first two days were spent largely dodging the storm clouds and trying to get in a bit of birding without straying too far from the sanctuary of our minibus. All hoped for better things as the week unfolded.


Awakening on the third morning of our tour to the sounds of serenading serins rather than cascading rainfall was therefore most welcome. We spent that largely dry day marauding across the eerily silent openness of the steppe lands of Castro Verde, an hour’s drive north from our base in Alte, itself positioned 20 kilometres inland from the Atlantic coast.

We were favoured with privileged access to this deceptively vast landscape and through the whole day saw only one other human being in the form of a shepherd accompanied by his curiosity fueled dog. There were many more birds though. Within minutes of entering the park we espied a small party of great bustards grazing on the stunted grasses covering the thin sandy soil; such wonderful birds and a species that has galvanised local folk to treasure the special landscape that surrounds them.

Where once these locals would happily shoot the bustards for food they now safeguard them; the bustards have become a symbol of the wildlife richness of their environment.


Wherever we stopped and stepped out into this mild November day we were surrounded by sweet, melodious trilling of calandra larks and the gentle fluting of crested larks that spend the winter months scraping a living from these spartan plains. There was no other noise, not a sound, except the occasional gentle tinkling of distant sheep bells, or the soft sighing of soft breezes. Red kites dangled on angled wings, buzzards sat atop fence posts whilst hen harriers, peregrines and kestrels ranged over the plains looking to make a meal of one of the melodious larks.
A lunch interlude at a surprisingly almost dry river course sprang the highlight of the day in the form of an immature Bonelli's eagle, feasting on the carcass of a cattle egret it must have caught some little while earlier. A few minutes later two of its kin excited us by spiraling together over a nearby wooded hillside. We could hardly believe our luck, three star birds within 10 minutes. But of course that is the advantage of a tour with local expert guides – they know where to go and what to look for. Here once again the stillness of the countryside was remarkably loud.
The odd farm vehicle would pass, but largely the only sounds were the uplifting flutings of woodlarks and the indignant rattling of Sardinian warblers. So still was the air that these songs carried for a deceptively long way, with seemingly close birds being found in someone's scope perched atop a distant bush, well beyond the normal range of perception. Such things bring home the way in which our own overcrowded lands are not just polluted by rubbish but also by noise. Nowhere in Norfolk, nay England, can you really escape the sounds of the 21st century. Even on the remotest hilltop you are just as likely to be assaulted by the screaming of jet fighters as you would be by the braying of lambs. The background drone of endless traffic blights our lives, but happily there are still places in Continental Europe where you can find true peace and quiet. What bliss.

A late afternoon return to the steppe provided a distant, but most impressive, sight of an immature imperial eagle tugging beakfuls of flesh from a dead sheep, whilst a red kite loitered above awaiting its turn at the spoils.

Throughout the remainder of the week we explored coastal lagoons where ospreys fished and flamingos idled, cork oak woodlands where firecrests flitted and crested tits buzzed amongst the multi-hued autumnal foliage, high hilltops where hundreds of crag martins chased flies and a pair of griffon vultures lazily soared, lowland heath full of dragonflies and beetles,rolling farmland where little owls watched our passing through glaring yellow eyes, and for some a trip several miles out into the Atlantic to see skuas, petrels and shearwaters following fishing vessels. An itinerary as varied as the wildlife.

We ended the holiday with a walk through a coastal pine belt which summed up the dichotomy that is the Algarve; on one side a tidal lagoon unspoiled and home to the plaintive calls of wading birds, on the other a meticulously manicured golfing village complete with executive residences and ornamental lakes. Much of the eastern coastal strip has been irredeemably developed in this fashion, but west of Lagos a different landscape can be found. Long may it remain unmolested.

Mention must be made of the ethos of Honeyguide who ensure a proportion of the costs of each holiday are directed into local conservation projects. In this instance a donation was made to our guide Domingos Leitao who works for SPEA, the Portuguese BirdLife partner, to support that organization in preventing illegal trapping of songbirds in the Algarve region. Although Portugal has almost eradicated this horrendous practice, the recent economic downturn has driven some people to seek bird trapping as a means to supplement their income; the tiny carcasses of robins, warblers and finches are sold to supermarkets and restaurants who sell them on as some kind of delicacy. Domingos works with local law enforcement agencies to stamp out this activity and educate people that this is no longer acceptable. Top man!

Despite the very unusual and quite horrendous weather at the beginning of the week, we still managed to clock up close to 150 species of bird, several mammals including the charismatic Iberian hare, butterflies, dragonflies, beetles, and interesting flowers together with close-up views of some more exotic inhabitants such as scorpion, tarantula, chameleon and a rather large and toxic centipede.
The sight of the hunting booted eagles, the fleeting glimpses of iridescent Iberian magpies, the constant activity of wintering chiffchaffs and the silence, the intoxicating hush, are things I will remember. That and the wine.

Quite a haul from effectively only 5 days in the field. When the sun shone, as we are reliably informed it usually does, the temperature soared to the mid-20s which makes me think that’s not bad for November. A return visit for a relaxing winter break may well be on the cards sometime
soon.